Lots of westerly swells these days, here's another beautiful shot of the very photogenic Pipeline by Liquid Barrel. 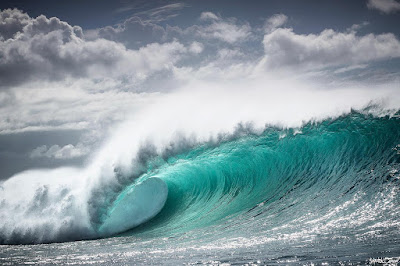 5am significant buoy readings and discussion.
South shore
No indication of southerly energy at the buoys, and the Lahaina webcam reflects that. Yesterday instead there were actually waist high plus waves (no idea where from). Always worth a check.

5ft @ 13s from 316° (NW)
2.9ft @ 6s from 71° (ENE)
The north shore will definitely be pumping in the afternoon, I wrote yesterday. Well, it wasn't. Below is the graph of Pauwela that shows (light blue line) that the swell did pick up (at the buoy) pretty much as I predicted with the red dotted line. Maybe a bit smaller, but nonetheless it shows 5ft 13s at 6pm. I surfed Hookipa at sunset, and the NW sets were about 10% of the energy that was out there, the rest of it being the easterly one.

So why such little energy? My guess is that this swell's most important component was made by the angular spreading (out of the blue fetches in yesterday's maps collage). The angular spreading is one of the most difficult thing to predict and it can be extremely inconsistent, specially on the edge of it. The message here is: the information reported by the buoys (height, period and direction) don't give any idea of the consistency of a swell. For that, you need to rely on observation of the fetch. Yesterday I definitely got a bit too excited... 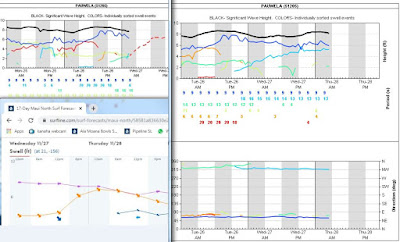 5ft 13s is the number also this morning, but if it's like yesterday (and a quick look at the Mama's cam seems to confirm it is), it will again be mostly about the easterly energy, which todays clocks in at 5.8ft @ 10s from 52. Hookipa still head high with occasional bigger sets, eastern exposures might offer bigger size.

In the NW corner there's a weak fetch out of which we should get some angular spreading in about four days,, but to the North of us is the much stronger one that will send the waves for the first contestable day at Honolua. The high I marked will move to the east and take over the middle of the Pacific.

That will be the start of a long period of trades that will last until the jet stream will finally have a dip into the Pacific that will bring to the formation of the monster low we see in the map of Dec 7th. Long term forecasts are subject to change, but that should provide the Pipe Masters (Dec 8 to 20) with a solid swell, hopefully not too big. 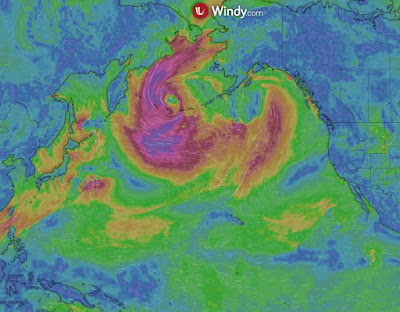 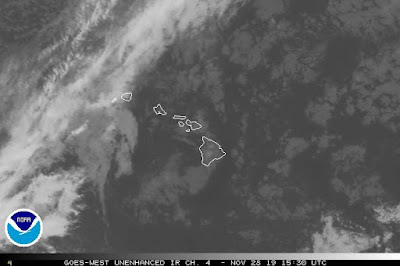