First a message to the KOKO FOTO water photographer. Brother, I couldn't find your website. Please shoot me an email (address on the right) if you found mine, I'd like to check what you got. Thanks!

Despite the way it looks in this gopro shot, Hookipa yesterday morning was pretty junky. 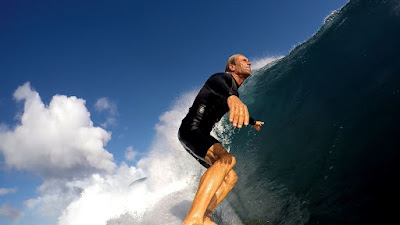 I surfed there an hour and then the onshore wind got stronger and stronger and I left to go surf Lahaina side.
Lahaina didn't offer much, so I kept driving to Honolua with the intention of catching whatever was leftover from the NW swell. Knee to waist I was guessing and I was even pleased when I saw that I was right. I came prepared with a longboard and I hit the water with it.
I had fun at the point for an hour and then I started seeing waves breaking at the Cave, so I moved there. In the next two hours, the waves went chest, shoulder, head and overhead high. Pretty much 10-15 people but distributed all the way to keiki bowls. That's the score part.

The failure part is that I had no idea it was coming. Here's the shameful list of the things I failed noticing:
1) the high readings at the N buoy (graph in the buoys section)
2) the forecast table of Pat Caldwell that was calling for 8f 8s NNE
3) the wind map with the fetches that I post every freaking morning

As far as this last point goes, below is the map from April 16. In commenting it, I only focused on the strong NW fetch, quickly dismissing the N one by calling it "weak". It sure is weak, but it's also very close. And I keep doing that mistake of under estimating weak but close sources. 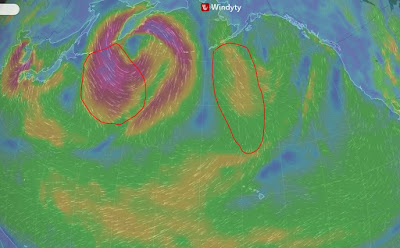 Anyway, enough analysis, here's a couple of shots I took after my session. First time I see standup surfers at Honolua. Hopefully the last one too.
This one is at The Point. Again, when I entered the water three hours earlier it was waist high. 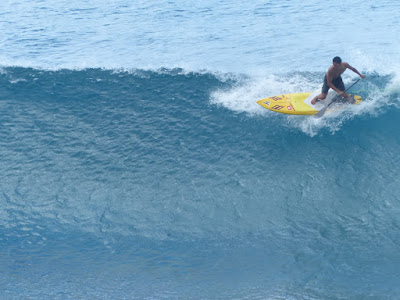 This other one is at The Cave. 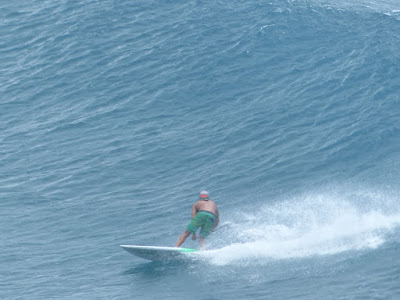 As you can see, the NW energy is completely gone at the NW buoy, but still somehow there at the Waimea one. That will provide the north shore with some leftovers, but probably not for long. But the north shore is going to be junk because of the wind, so let's focus on the northerly energy that might hit the west side and other spots.

Below is the N buoy graph. Since I read Pat Caldwell saying that it was adrift and in a position WEST of the NW buoy (that was at the beginning of winter), I tend to overlook it, because I don't know where it is. Oddly, Pat never commented again on this, so I'm just gonna assume it was put back in its place and start looking at it again.
Well, early morning the red line wasn't too high, so shame point n.1 above wasn't too bad. Then it got up to 10+f 8s in the middle of the day and now it's on its way down, but still reading 8f 8s, which is what Pat Caldwell has in his table for today, so I'm counting on those and probably going back to the Bay. Surfline calls for 6.7f 8s from 42 at 8am going down a bit throughout the day.
I'm pretty sure this short period swell peaked yesterday in Maui too, but I just want to get out of the onshore wind of the north shore and see some clean faces, doesn't matter how small. 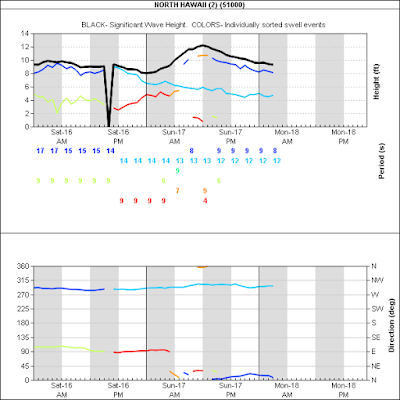 MC2km NOT UPDATED YET, this is today's 7am map in yesterday's run. As you can see, ugly windy already everywhere. Somewhere though, it'll be offshore. Check link n.17 for the updated maps later on. 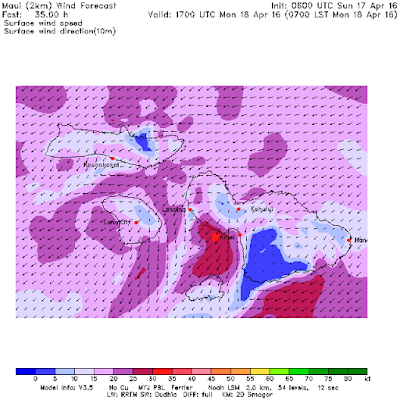 Wind map shows two insignificant small fetches in the NW quadrant and a much more significant CLOSER NNE fetch. More waves are going to come from that direction.
South pacific is going zonal, we might get some long period but very small angular spreading to keep the south shores from going flat. 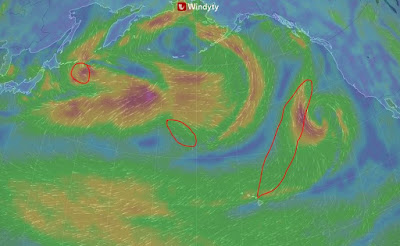