What a crappy day yesterday was!

Unless you went on the other side of the mountains where occasionally it looked like the photo below by Jason Hall. 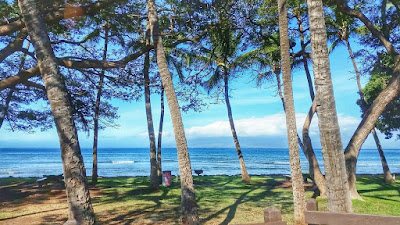 I stayed on north shore instead and went for a power hour at Paia Bay: 12 waves - not a single turn, is a pretty classic outcome for over there. Still, my surfing improved more than sitting on the couch or going to the gym. That's how I see it.

The Maui direction of this short/mid period energy is probably right in between the above two buoys, so kind of northerly. The size is there, the wind on top of it too.
At one point during the day, Maui County employee Woody finally made it to work yesterday and did his job of pushing the update button, but this morning is way too early for him, so here's today's map at noon, but in yesterday's run.

Click on the link n.17 of GP's meteo websites list on the right and check if they are now updated, but it's not that critical today, since also the updated maps are going to look pretty similar to this and show some strong wind. Which of course will go up and down with the squalls. 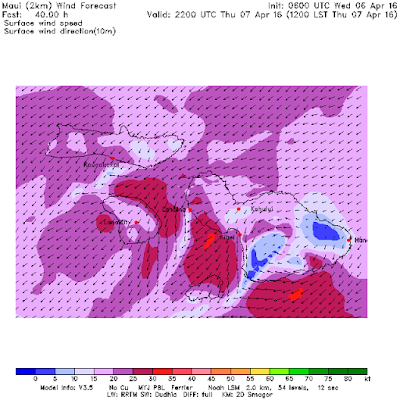 0.5ft @ 20s from 205° (SSW)
So there's some energy from the south in the water and actually the Lahaina webcam looked pretty good yesterday at sunset (looked bigger than waist high). The trick will be to find a spot that is sheltered from the ugly wind.

Escaping the rain should be easier, since that one seems to be limited to the north shore (courtesy of the wind) on the below 4.45am radar image. 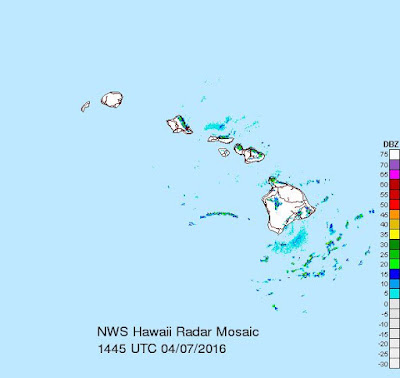 Wind map shows a pretty strong NW fetch (third day in a row) that is going to move straight east .If it moved ESE towards us, it would have been captured and would have generated much bigger waves. Nonetheless, the related swell is forecasted to peak at almost 10f 15s from 324 on sunday evening by Surfline. It's going to last quite a few days till mid week. And right after it, another small NW pulse will come from that storm that is just off Japan on the map.
The whole circulation is going zonal (west to east) which is quite typical of the new season. That will diminish the potential size of the NW ground swells and will guarantee more consistent trades. 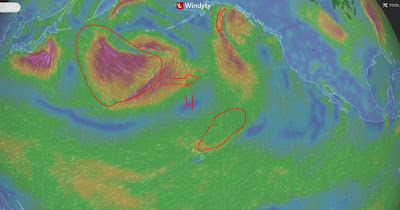 That is reflected by the windguru 10 days table. Monday through Friday next week is going to be horribly windy. The color red in the forecast is the worse for the practice of any water sports with the exception of downwind SUPing. The related windswell for that strong trade event is forecasted to peak at 13f 8s from 79 on Wednesday and stay elevated for the rest of the week. The waves are going to be big and messy. Nonetheless, I predict that many tens of thousands of photos of the windsurfers will be taken at Hookipa between the usual photographers and the seasonal brand photoshoots. 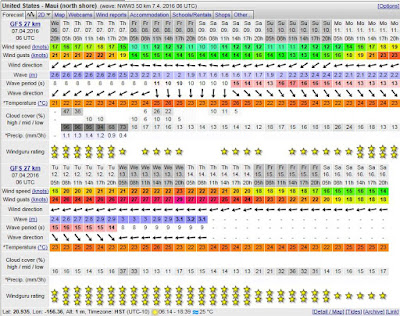