Well, that minimum in the surf size due to the lack of fetches was 2 days ago (specially at sunset), definitely not yesterday!

But more than the size (solid head high, which means occasionally overhead), it was the quality of the waves that was really outstanding. The day started with light offshore and dreamy uncrowded conditions at dawn. That lasted the usual one hour and already by 8 it was packed.
Then around 10 a pre-front band of clouds sent most of the people in with a half an hour of onshores. And then it got good again and it stayed good at least until 1 when I left.

I surfed 4 hours and gave the sessions and the conditions a 9. In between session I briefly took the camera out to document the beauty of the waves. This one's at The Point. 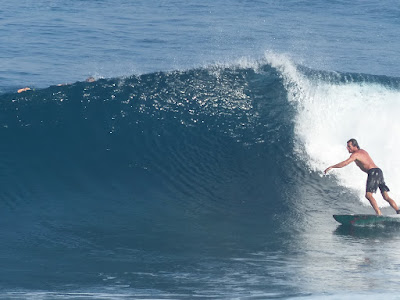 Later in the day the period should climb up to 10 seconds, but the wind will make finding a decent spot where to surf a challenge. That's a bummer, because Superbowl Sunday is usually prime time for uncrowded surf.

Wind map shows a solid NW fetch starting to stir some serious waters for Wednesday's swell, a small north one and the northerly wind that will characterize the conditions today. I'll try to post the MC2km map for a better look at that whenever it is updated. 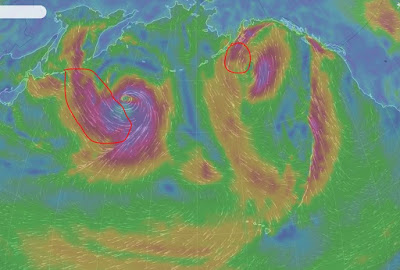 Last but not least, I just found this video in which Kelly Slater talks about board designs. At one point he briefly talks about fins and he says: "this guy Pio makes these fins in Maui for Kai Lenny and other guys... they feel da kine brah!".
Pio Marasco has owned Maui Fin Company for many years and he's from my home town.
Congratulations brah!