Early surf and late windsurf is my Hookipa sessions report.

This is how it looked at dawn and for some reason blogger doesn't let me change the size of the pictures this morning, so you guys will have to live with the small format. 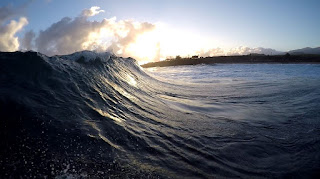 Later on the windsurfers hit, photo by Jimmie Hepp. 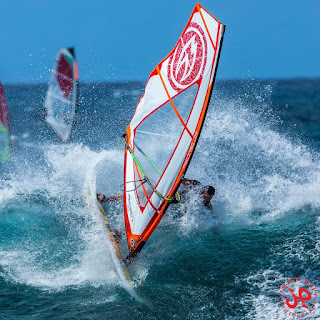 Big nw swell on a steady rise all day. The 3am graphs and readings for NW and Waimea are below.
I underlined the long period readings at Waimea. They don't show at the NW buoy, because this last one is less sensitive to them, but they're there too. The swell will have a first rise in the 13s period (sets from the head of the fetch) and then the longer 20-16s component (bigger sets from the back of the fetch) will add on top.
Here's the readings, if you can't read them because the picture is too small.

This is Waimea at 4am and you can see the increase in both components. Roughly 4 hours difference between Oahu and Maui, so that's pretty much what we're gonna get around 8am, minus a little decay for the extra travel. Not much energy dispersed in refraction though, seen the unblocked directions.
5.1ft @ 13s from 331° (NNW) 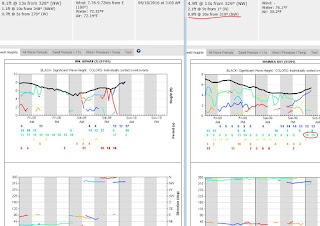 MC2km maps not updated yet at this time, this is the map of the old run. Link n.17 will hopefully give you the updated maps. Hookipa should be surfable/sailable early, but towards the end of the day it might get too big. 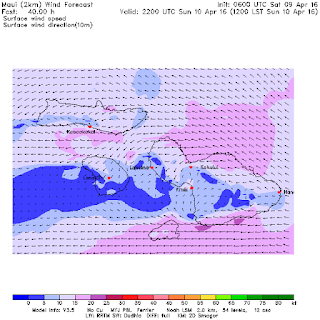 Wind map shows a nice compact and perfectly positioned NW fetch. Waves all week this week with a lot of wind. Bit of an epic week for wind related sports, specially for the strong wind lovers. 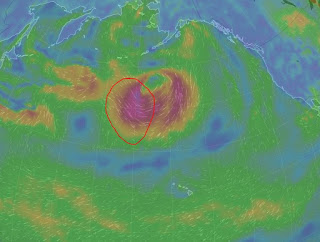 South Pacific wind map shows two fetches:
a SSE one and a SSW one. The related small swells should arrive roughly at the same time in a week. 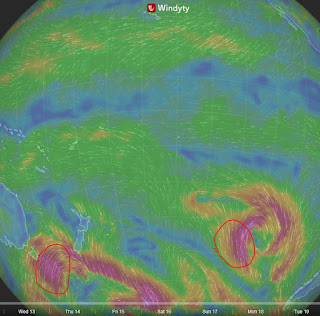