Surfed the same break in the morning and in the late afternoon and the tide made a huge difference.

Average at low tide, firing at a higher one. I've been told I never mention the tides. True. But there's not much to say about them in Hawaii, other than... what I'm about to say right now.

Tide swings here can go from a maximum of 3 feet to a minimum of zero (that's when it seems that there's only one low and one high in the day). As such, the difference in the behavior of the waves are not so extreme as in other places with bigger tide swings. As such, they're not as critical.
But they do make a difference in some places. Knowing the tide when you go surfing is a must. That's the only way to build that knowledge of what tide a particular spot likes (with a particular swell size, period and direction, I should add...).

The reason I never mention them is that you can check them yourself by clicking on link n.12. Links from 1 to 17 are the ones that I read every morning before making this call. That website is accurate and it's the only one I use. I also like it because it offers the tides also in different part of the island. For example, by clicking on Lahaina, you'll find out that today over there there's a full moon low tide at 9.24am. I scheduled my student for a 5.45am start, because I sure want to avoid that. And, I will be able to have my session after the lesson on the rising tide, which is usually regarded as a good moment for most breaks, since you can feel the "push of the tide".
I've never really believed much in it (at least in Maui) and for me what makes the difference is how much water there is on top of the reef where the waves break, more than if the tide is going out or coming in and at what speed. Yesterday's afternoon session, for example, was on a tide going from high to mid and it was just firing, as I said. And if could have stopped the flow of the tide with a button, I sure would have done it. Because it was evident that that size swell, with that period and from that direction, just loved that amount of water on top of that reef. As good as I've ever seen it, really.

Well, there you have it. That's what I think about tides, next time I'll mention them will probably be in a year or so.
This photo by Jimmie Hepp sums up the afternoon conditions at Hookipa: windy and wavy and the windsurfers keep scoring. 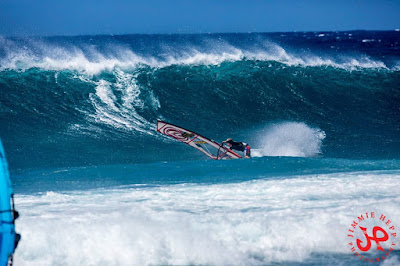 Barbers
2.8ft @ 14s from 264° (W)
1.5ft @ 16s from 211° (SW)
A reinforcement was expected today for the current NW swell. Looking at the graph of the NW buoy on the left below, I can see a little bump back up, but not much really. Plus the period kept going down and that'll limit the sizes. In other words, I don't see the waves picking up some size at the buoys at all. BUT, look where the swell is coming now from at the NW buoy: 317. Now, THAT is going to make a difference. I put two red arrows to point out how much the swell changed its direction compared to two days ago. That's almost 20 degrees and that reflects the path that the storm (and the fetch) had when the swell was generated.

So I'm calling for similar sizes, more consistency, a little less power and a little less clean breaking pattern due to the 9-10s northerly component on top of the main swell.

Don't ask me why the North buoy always shows a much more westerly direction, 'cause I have no idea. It might be related to the fact that it's still adrift, like Pat Cadlwell mentioned months ago and that's why I tend to overlook it a bit.

Lastly but leastly, a quick comment on Barbers' readings. Both the two local (close to shore) buoys that are open to the south (Lanai and Barbers) are hit by the wrap of the NW energy eventually in the water. That's what that W reading is. Sometimes, like in the Lanai case this morning, this energy masks the energy of the south swells eventually in the water. Fortunately Barbers is sensitive enough to also reads 1.5ft @ 16s from 211° (SW) and that's an indication of the southerly energy we were expecting. Not the most exciting reading, but there were some sets already yesterday, so check the cam before going, as usual. 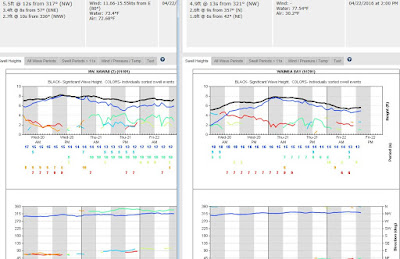 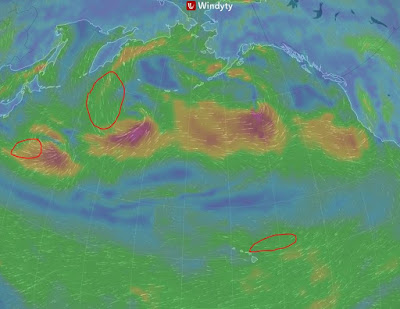 Not much going on south either, other than another Tasman sea swell (too bad I'm not going to Fiji) and a cyclone that might ruin the trip of some friends that left to Samoa yesterday. 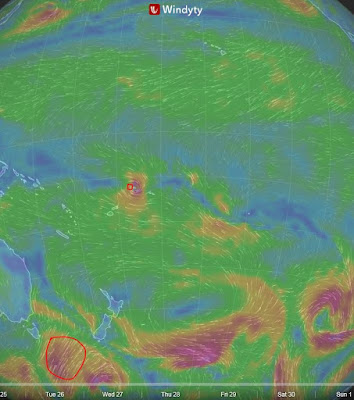 Easterly wind, check the MC2km map whenever they will update it.
No time to review this call, sorry for typos, grammar and other mistakes.
Posted by cammar at Friday, April 22, 2016