Another surfing + windsurfing day for me yesterday.

As you saw from the updates, Honolua wasn't really worth the drive, but at one point I was surfing the Cave by myself and that was the first time ever. Long wait (10-15m) for a chest high set, but when it came it was nice not to have to deal with the others. Surfing by myself gives me the purest feeling of freedom. None of your choices, in fact, are influenced by the other surfers in the lineup and everything you do is because you think the wave demands so. I love it.

Windsurfing at Hookipa was quite wild (outside was blowing 30+), but I had a couple of inside clean bowls that looked like the photo by Jimmie Hepp below. Unfortunately I'm afraid my bottom turn didn't like quite as good as that one. 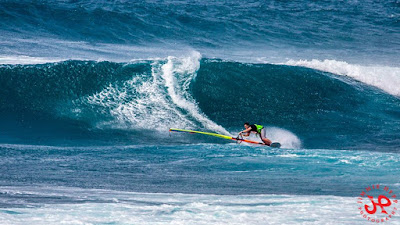 The minimum in the NW energy in Maui will be over night and then tomorrow a new NW swell will pick up all day and peak on Saturday. Surfline calls for 1.3f 20s at 8am tomorrow, so nothing to wave up early for. Of course more details on the arrival time will be available in tomorrow's morning call once the swell hits the NW buoy.
The graph below is Waimea and shows the decline of the current NW swell. 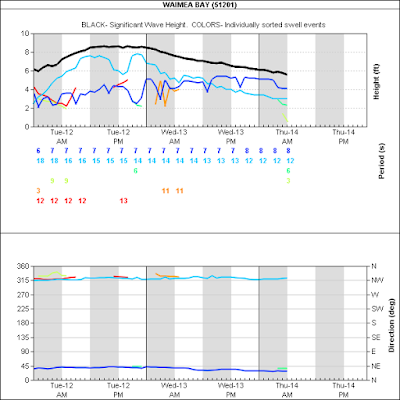 This one instead is the Samoa buoy. I promised I would keep an eye on the possible ESE energy generated by that cyclone a little more north than usual that I pointed out in the south Pacific maps in the last few days, and there is the related swell indicated by the red arrow. As you can see it stayed between 4 and 5 feet and around 14-13 seconds. It will be interesting to see what we get up here, should be pretty minimal.
The SE Hawaii buoy will be the one to check. Nothing yet over there. It's more out of curiosity really, that's an unusual direction for us. Might have to calculate the shadowing angle from the Big Island. 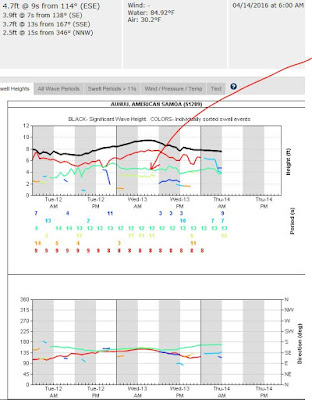 Looks like Woody called in sick, nobody available at the Maui County to push that big red update button, so here's the noon map for today from yesterday's run. Stinky windy again. 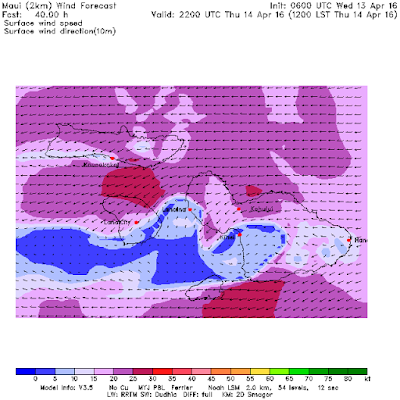 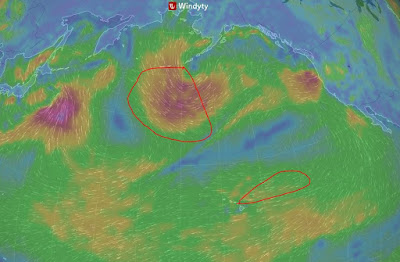 South Pacific wind map shows a decent fetch in the usual good corner and it should stay strong for next couple of days. Related south swell in a week at a size that Surfline calls between 2-3f 16-14s Thursday through Saturday next week. 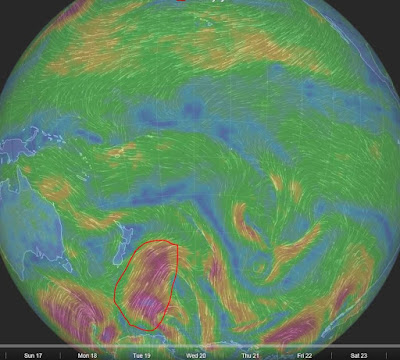