Average surf and fun early windsurf is my sessions report from yesterday.

Wave size went down some more (wait until you see Hookipa this morning!), this photo by Jimmie Hepp shows a chest high one. 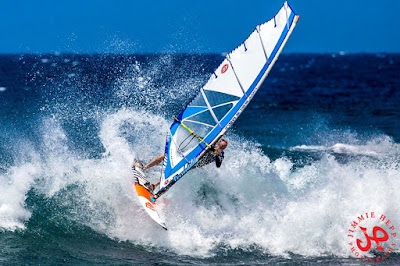 Judging from the lack of wave noise out my window, I'm gonna call Hookipa almost flat this morning. I'll put the longboard in the car and take the 1 minute drive and report from the beach anyway, but I'm taking my time this morning.
It will be the last opportunity of riding clean waves though, as a front is going to hit late today and bring onshore winds for at least a couple of days.

Below is the satellite closeup at 5am. 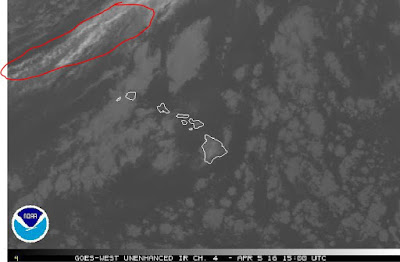 Wind map shows a nice compact NW fetch up in the NW corner and a wide but weak NNW one. I drew a line to show the front that is going to hit late today and you can clearly see the wind behind it.
It's gonna be onshore ugliness, so get those clothes off the floor and mop it up or mow the lawn or fix that leak. In other words, don't miss this wonderful opportunity to do those task you've been delaying since the beginning of the winter, 'cause now you got no more excuse. 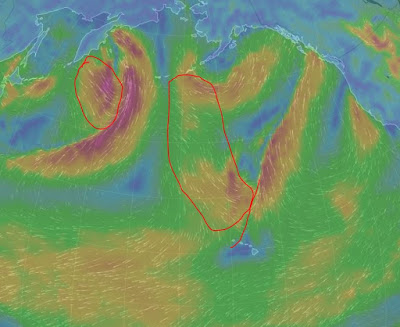 Southern Pacific doesn't offer many fetches today, but it is about to. The map below is modeled to happen Friday and you can see how nice and much closer than usual that storm is. We'll keep an eye on it. 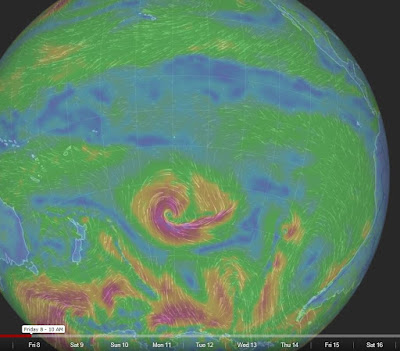 Hookipa on the left, Lahaina on the right, I got boards to try and there's no waves...

Lastly, here's the best Hookipa windsurfer doing some amazing stuff. If you're a surfer and have prejudice towards windsurfing, this might make you change idea.

Through My Eyes - Episode 3 - El Niño from levi siver on Vimeo.


PS. I just finished watching the Bells contest. Wow.
Now check this out:
Cheapest cost of the last leg of my summer trip (DPS-HNL): $504 with a 9h stopover in Melbourne.
If I break it down and sleep a few days in Melbourne it's even cheaper:
DPS-MEL: $121 + MEL-HNL: $293 = $414
I have no excuses. I just hope they rent VERY THICK wetsuits in Torquay, since we're talking end of August. Cold or not, I'm gonna surf Bells Beach!
Posted by cammar at Tuesday, April 05, 2016