Surfed this little left twice yesterday and it was fun, but don't be fooled by the gopro shot, it looks better/bigger than it was. 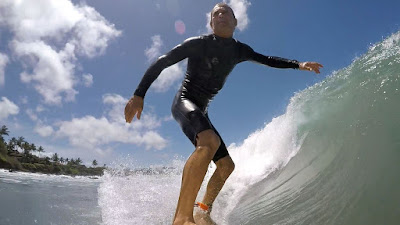 2.6ft @ 14s from 347° (NNW)
2.4ft @ 5s from 24° (NNE)
2.0ft @ 11s from 43° (NE)
The NW and Waimea graphs are below and you can notice on the first one how much the NW swell is going to go down today in both size and period (light blue line pointed by the red arrow). But we're starting from something like 5-6f 14s and that's a really fun size for one of my favorite spot which I'm going to try to hit as soon as I'm done with this. I'm a little worried that the N to E short period energy (best reported by the Mokapu buoy) will ruin it a bit, wait for the beach report for that.

No sign at all of that ESE energy I was trying to track: it didn't make it here at all. Interesting. And now that information goes into my memory database. Next time I see a cyclone in that same position, I know I shouldn't expect much. Been doing that for 15 years and I never stop learning.
Despite that, my boss told me that there were shoulder high waves at the Lahaina harbor yesterday for the interscholastic contest he organized, check the webcam if you feel like going that way. 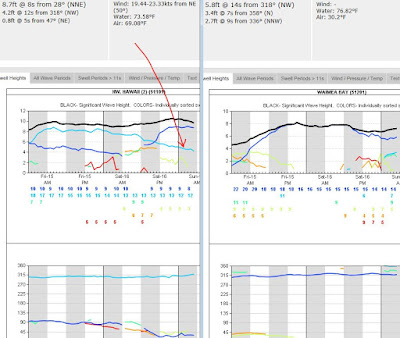 BTW, below is the print screen of what you get if you go to the NOAA NW buoy page instead. Which one is more clear? Surfline buoys are my bible. My only one. 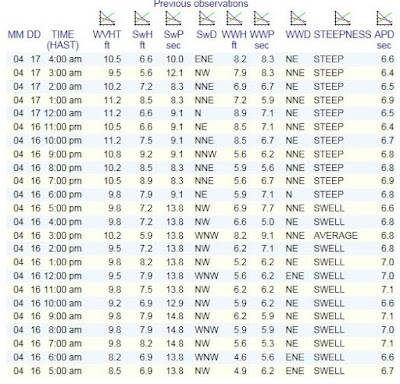 MC2km map at 1pm shows the arrival of moderately strong onshores. I know, they're not straight onshore, but as long as they have a bit of onshore angle in it, I derogatorily call them onshores as they will ruin the quality of the waves.
Definitely not the best for sailing on the north shore. The Kihei windsurfers will love it instead. 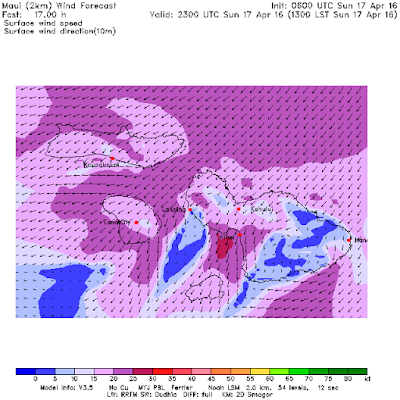 Wind map still shows a strong NW fetch and a weak N one. The swell generated by the NW one is going to be the last decent ground swell for a while and for a change, I'm not even worried about it as I'll leave in a week for a first short surf trip. No, I didn't plan it based on the forecast, just sheer luck. 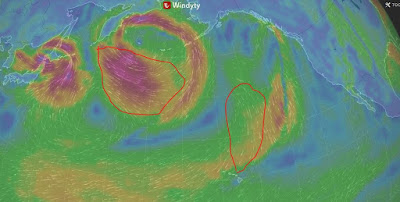