The action shots from yesterday were already posted in the 8.30am update, so scroll down if you want to see the wave size in the morning. At sunset it looked a bit bigger, but definitely not due to the fore runners of the WNW swell. It was cloudy, onshore and cold, but there were some clean faces.

1.4ft @ 13s from 191° (SSW)
The NW and Waimea graphs are below. Last readings are 5am, don't be fooled by the wrong placement on the time line.
300 degrees is not a good direction for Maui. The only place with significant wave size will be Hookipa, even though I did see a couple of sets on the webcam at Kanaha. The wind is on it already.
Surfline forecasts the swell to pick up a couple of feet during the day and peak at 8pm at 7.5f 15s from 315 (that's after the refraction on the upstream islands). 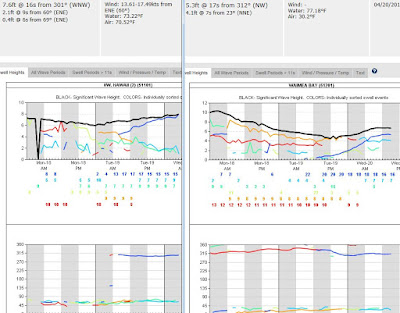 I was hoping the swell would be west enough to hit the Kihei coast, but judging from the shore break (or lack of there of) in the bottom cam, I don't think there's much down there. I was also hoping that those 1.4f 13s from 191 at the Lanai buoy would do something a little bigger than what the webcam in Lahaina shows (top right).
I guess I'll stay on the windy north shore. 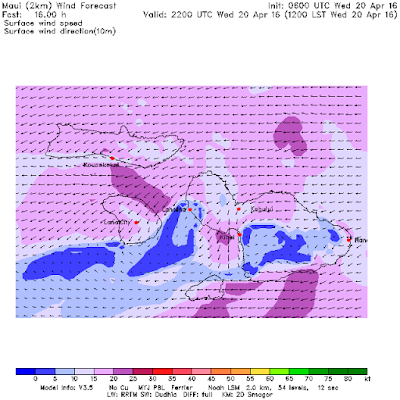 Wind map shows that yesterday's good NW fetch has already moved east a lot and is now aiming at the mainland west coast and not doing much for us anymore. Nonetheless, yesterday's wave generation will send a reinforcement to the current swell on Friday.
A few days ago I said that there's not gonna be much on the north shore after I leave on Sunday. I take that back. The models changed and now there's a bunch of fun size NW swells lined up every other 3-4 days. 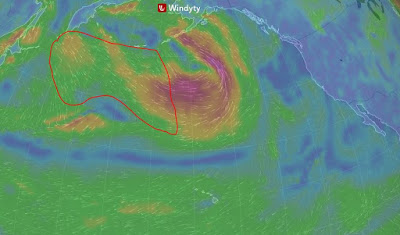 South shore will have some action too starting this Friday. Today's a good fetch (mark your calendar in a week), but tomorrow should be aiming elsewhere already. 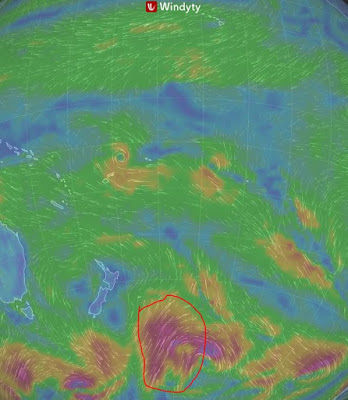