Yesterday I had two surf sessions. Both fun, with one amazing wave well into the excellent range.

Good news from the shark attack victim: after a long surgery, he should be all good with all the body parts still attached and functioning.

As usual, in the afternoon the windsurfers hit Hookipa (which, as planned, re-opened at noon) and one of my favorite windsurfers in the world is in town: here's Kauli Seadi in a photo from this gallery by Jimmie Hepp.
You think it's crowded now? Wait until the PWA guys show up after they finish the contest they're having at the moment in La Torche... 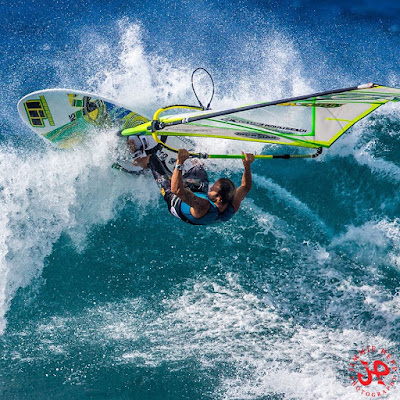 Very small energy at the local south facing buoys. Check the webcam in Lahaina for details on the size. Yesterday was pretty much flat.

3.6ft @ 13s from 347° (NNW)
Pretty strong windswell will overlap on top of some energy from NNW to give us another day of rough ocean conditions. Without even mentioning the actual wind, which also today is supposed to blow pretty strong. BUT, there's waves, so no complains from the blog author. Somewhere will be clean. West side could be the call, the bay had shoulder to head high waves yesterday.
Current wind map shows the beginning of what should be a strong flow out of Kamchatka (we'll keep an eye on it in the next several days), a reduced local windswell fetch and a NNE fetch in the gulf of Alaska. A nice but very compact fetch also down south.
A little mixed up, but many fetches are better than no fetches. That's why Indonesia is such a great place for surfing. Only open to pretty much one direction and only one swell at the time (most of the times). 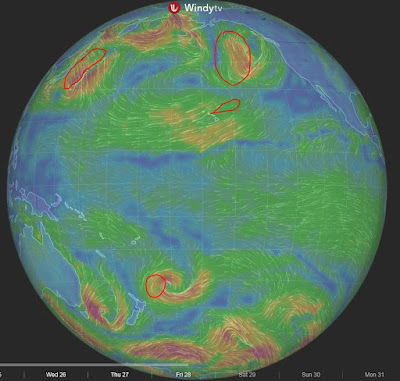 Long term forecast looking good for the upcoming AWT Aloha Classic. Big waves pretty much right away with two strong pulses of 8f 14s forecasted by Surfline between Nov 2nd and 5th. You can sign up here.

PS. The search for the magic stick continues. I'm selling this excellent board so that I can have another similar one shaped with a few little tweaks.
Posted by cammar at Sunday, October 23, 2016

Thanks for the update! I'm looking forward to the Aloha.