Double surf session in Lahaina for me yesterday, the morning was absolutely pristine again.
I might have to start contemplating a move over there sooner or later.

As usual, the windsurfers hit the waves at Hookipa in the afternoon. This photo comes from this gallery by Jimmie Hepp. 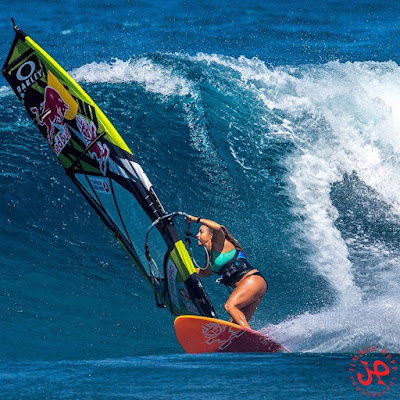 The swell that I've surfed the last three days is still hanging in there with 1.4f 13s, but now there's a new one with 1f 16s. I thought I was gonna stay on the north shore today, but that makes me question that decision. That's why it's pointless to do surfing plans in the evening. And that's why this is called the morning call. You need to check the latest available info and then decide.

Pauwela
4.1ft @ 10s from 6° (N)
3.9ft @ 7s from 31° (NE)
3.1ft @ 13s from 327° (NW)
Terrible mix of periods and directions at the northerly facing buoys. The NW energy is supposed to slowly die, while the 10s period one from the north should stay pretty steady around 4f. If you don't remember the fetch where that comes from, you're a bit hopeless but lucky... just scroll down to a couple of days ago and you'll see it on the wind map in the gulf of Alaska.

Current wind map shows a wide, but far and not too strong fetch off Kamchatka, the windswell fetch and an interesting one down south creating an extremely rare SE swell. It's gonna be mostly south by the time the angular spreading will bend the waves our way. I like it because it sits around 30 degrees south and that is a lot closer than where the south swell fetches usually sit. We'll see what we get in 5-6 days.

MC2km maps still unreachable, this is the HRW model at noon today. Should be windy again. What a news! This has been one of the windiest October I can remember. Maybe not always strong and not always from the right direction, but the trades blew relentless. They blew out the waves relentless too.
Looking forward to the first glassy day on the north shore of the season, but it doesn't look like it's gonna happen anytime soon. In the meantime, I don't mind driving around the corner to get my share of glassiness.