A surf and a windsurf session for me yesterday, both excellent.

The surfing was at Honolua. Here's a couple of shots I quickly took before getting in the water. 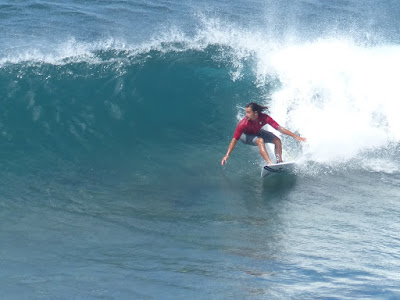 You guys ever tried to ride an alaia? I did and good luck is all I can wish you. 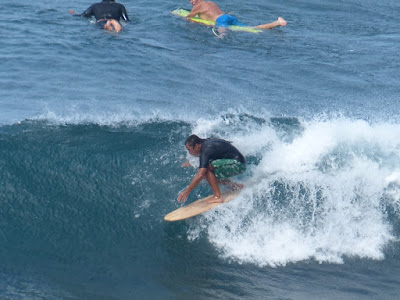 The waves were waist to shoulder high and I took the longboard out and sat at the cave with something like 6 other guys. Within 15 minutes they all left and I had it to myself for an hour, before being joined by two young, beautiful, graceful and talented longboarder chicks. It was a rare occasion in which I enjoyed having company more than being by myself. This was one of them... 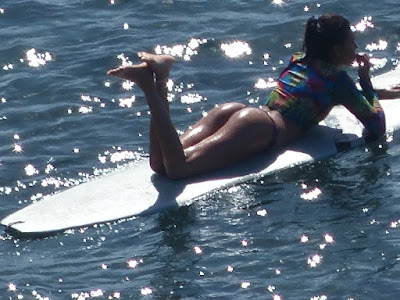 Completely satisfied by the surf session, I drove back to the north shore with the intention of checking out the windsurfing conditions. I hit the water around 4.30, right after a big squall hit and killed the wind just enough for my taste. Light sideoff and and head to logo high made for conditions that I ranked with a solid 9. I had a wave that was so good that got me screaming while kicking out.
This photo is from this gallery by Jimmie Hepp. 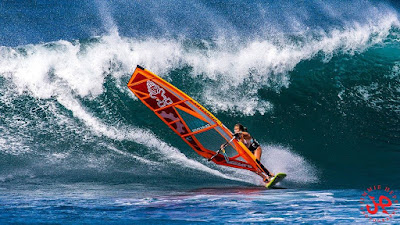 3am significant buoy readings
South shore
Lanai
1.1ft @ 13s from 207° (SSW)
Also today the energy from the south is minimal.

Northerly swell went down 1 foot and 1 second compared to yesterday, but with 3f 12s still in the water there will be plenty waves on offer for the first day of the 2016 Aloha Classic.

Here's a quick chat I had with Robby Naish while he was rigging his sail.
"Robby, you gonna do the contest?"
"I don't think so"
"You're not back a hundred percent yet?"
"Not even close"
"How long has it been since you got injured?"
"5 months"
"Well, you're just as old as me I think and that doesn't help..."
"Yeah, you heal slower at our age"

He should be ok by 2038 though. That's when I'm going to organize the world championship of surfing for surfers of class 1963. I seriously plan on being the best 75 year old surfer on the planet by then. Location to be announced. Most likely Launiupoko...

Current wind map shows the strong fetch that will send us a massive NW swell on Thursday. Surfline is calling for 12.6f 15s from 337 at 8am and I'm calling three-four times overhead at the Bay if that happens. The center of the low pressure is 956mb and all the west coast of the mainland will be hammered too. There's an even bigger swell forecasted for Tuesday the 8th, but it's too early for that.
Both this swells will be too big to sail Hookipa IMO (In My Opinion), but you never know. The level of the pro's is ridiculously high.

NAM3km map at noon shows: you guessed it again.