Thanks to blog readers Kristofer, Suzanne and Michael for their donations.
It's the last week of the year, please feel free to show your appreciation for the 2018 season of the blog with a donation via the Paypal button. Thanks.

Another way to support the blog is to buy advertising space. That's what blog reader (and long time friend) Michelle did, as she just entered the real estate arena. You'll find her banner on the right.
Getting a bit crowded there, I will have to raise my prices a bit, but I'm going to do that only in a week. In the meantime, the prices are: $50/month or $125/three months. After that it'll be $75/month or $200/three months. You will be grandfathered the old prices if you buy an ad space before January 6th and renew it continuously.

Unfortunately all this asking for support happens while I'm injured, so the blog content is not as rich as usual (and the call doesn't get posted as early), but I hope it's going to go back to normal soon. Jimmie Hepp was at Hookipa shooting the windsurfers and here's a shot from this gallery that shows the still remarkable size of the waves. 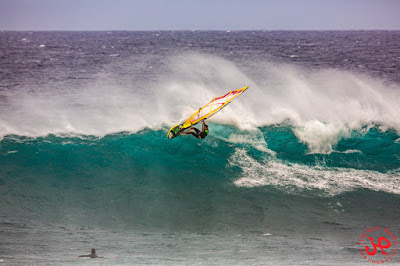 Lovely slivers of long period energy at the local buoys, I went to look for the possible SSW fetch on the maps from a week ago, but couldn't find anything at all, so I don't think that will increase in a noticeable way. In lack of a local lahaina webcam (please check the Ozolio website if you can host one), the picture of Ala Moana below only shows the 8s waves instead. Better than nothing, that'll make the tons of beginner visitors (and the surf schools) happy. 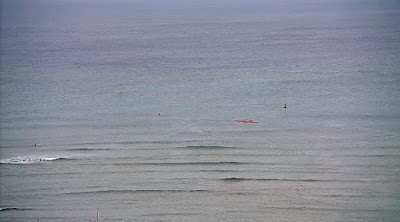 5.1ft @ 13s from 317° (NW)
2.5ft @ 6s from 70° (ENE)
The fact that the NW energy disappeared already at the NW buoy tells us that it won't last long also locally. Still a fun 5f 13s at the moment, but declining all day. In addition to that Pauwela offers 6.3f 9s from 34 degrees (really not sure this is a correct direction, but it's a somewhat northerly windswell). Mix of swells are usually not the best, but what counts is the wind, which is going to be strong easterly again.

North Pacific shows that the complex gyre off the coast of eastern Asia is now split in multiple lows. The stronger fetch is the WNW one right in front of Japan, but that'll be pretty sheltered by the upstream islands. The smaller NW fetch will have less trouble sending us energy, but it's smaller/weaker at the moment. Overall, it's been a period with no shortage of waves on the north shore, but not ideal for the west side which prefers a more  northerly direction. 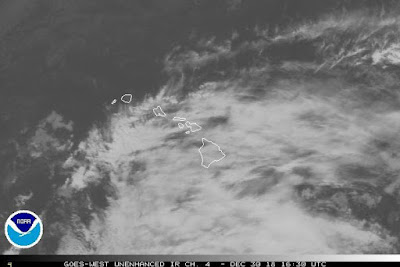