It's the last week of the year, please feel free to show your appreciation for the 2018 season of the blog with a donation via the Paypal button. Thanks.

Three shortboard sessions for me yesterday. I need to get more into the rain forecast, as yesterday the rain was the key to the fun conditions that Hookipa had all day. You don't often see semi-glassy conditions like these in the middle of the day. 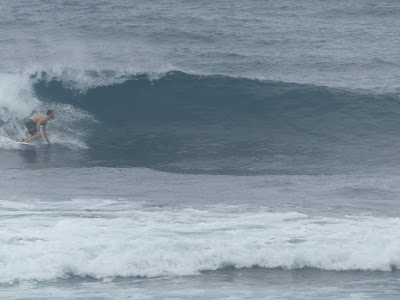 This photo shows the many sub peaks induced by the windswell that was travelling across the NNW lines. They sure will shorten the ride, but they can provide multiple take off spots per wave... if you know how to read their wedges. Catching a wave at Hookipa is already an achievement. 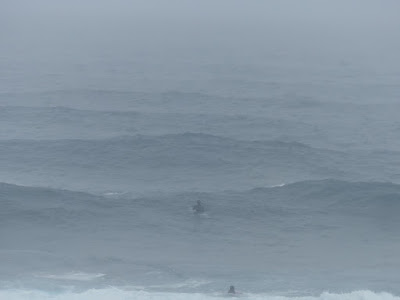 Not sure what to do with the direction of the two longer period swells registered by Lanai, but by my observations of webcams (mostly Kihei, since Ala Moana is now down) yesterday, the main energy seemed to be the 9s one. Tiny and weak rollers, barely breaking. Once again, a webcam in Lahaina would be of much more help, please contact Ozolio if you can host one.

Lots of energies in the water, so I only reported the new one at the buoys other than Pauwela, to point it out. Nothing to be particularly excited about, as the graphs of NW, Hanalei and Pauwela show below (new swell circled in red). The Surfline forecast only calls for 1.5f 14s (blue line), so it's actually better than that. Pat Caldwell instead was in Santa mode when he predicted 7f 16s in his table, that is definitely not going to happen. From home, I'm gonna call it head high and windy at Hookipa. Will probably report from the beach later in the morning.

Below is the collage of the fetches maps of Dec 20, 21, 22, 23 and 24. As you can see, the North Pacific has been providing consistent fetches in that distant WNW area. Definitely not the best for Maui, as most breaks favors a more northerly direction. Only on the 23 and 24 one of them became captured and moved towards us. As a consequence, Surfline predicts 8f 18s from 316 on Friday, which, to me, seems a bit optimistic. We shall see.

It's been an epic December for the wind related sports imo. The second half of the Windguru table seems to indicate the trend for strong easterlies to continue. 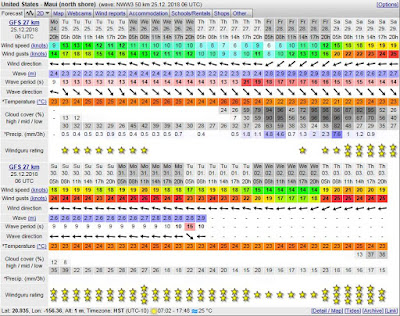 Yet another distant WNW fetch in the North Pacific.

South Pacific has a nice little S fetch that could actually do something.... if it stay there long enough. 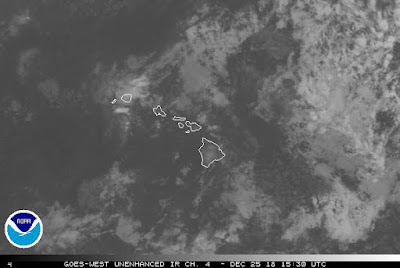