Yesterday I went for an x-ray and fortunately the ribs are allright. Just muscle damage (yet very painful in certain positions), I got very lucky on that one. Here's a video in which I analyze what happened in that wipeout, in case someone wants to know/learn.


I just found out that you can now embed Instagram videos, so here's an example of a spot where there's a lot of double ups of the first kind. Not two waves overlapping, but a wave that hits the reef with the size, direction, period, amount of water on the reef left by the previous waves, tide, wind, Alpha Centaury aligned with Saturn's 62 moons and so on...
Terrifying is my comment.

Lovely numbers continue at the buoys (what a couple of weeks these have been!) while a new long period pulse is predicted for the weekend. The webcam doesn't look particularly consistent and it seems a bit smaller than yesterday, but there's still occasional head high sets like this one below. 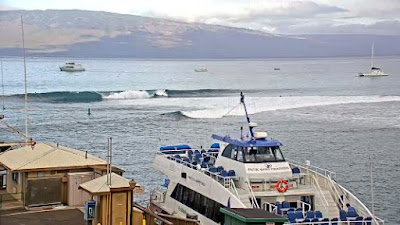 3.8ft @ 6s from 87° (E)
New moderate NW swell showing solid at the NW buoy.
Below is the collage of the graphs of NW and Pauwela together with the Surfline forecast. By applying GP's rule of thumb for the travel time (16h @ 16s +/- 1h per 1s), 14s swells take around 18h to get to Maui and I drew a red dotted line on Pauwela's graph accordingly. That means that, while Surfline only predicts the swell to arrive tomorrow, we should have some sets in the afternoon already today. 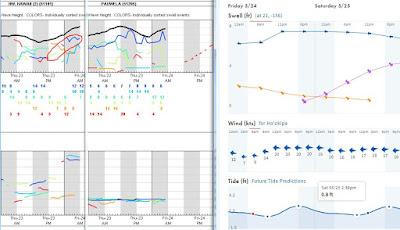 Below is the collage of the fetches maps of May 21, 22, 23 and 24. If it was already there Tuesday early morning, it's no surprise that it will start showing up this afternoon.

Wind map at noon shows easterly trades getting amplified into the 25 to 30 knots range. Windguru's 10 days table says 15, but that's the wind speed offshore. That, in fact, is the output of the GFS model which has a resolution of 27km, which does not do very well to calculate the increase in the speed due to the local mountains. The NAM 3km model at the bottom of the page does a better job. But the best model around at the moment is, in my opinion, the WRF-ARW 2km one of which I report the noon map every day. The one used by the page Maui County @2km was the best I've ever found, but that one's been dead for over two years now.

North Pacific's low that generated this weekend's NW swell has moved away a bit, but still has a fetch oriented towards us.

South Pacific has a fetch oriented towards the America's out of which we might get a bit angular spreading. 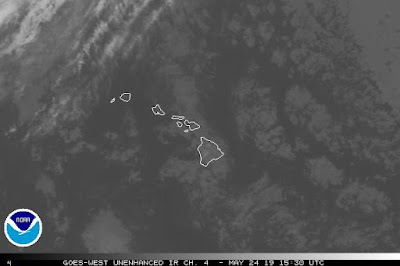 Get well soon GP, and thanks for sharing!

Thanks for the long description man. I'm fairly new to surfing, in my mid 30s, so your site is always great at helping me understand the sport as I progress. Hope you get well soon. About a month ago I messed up my ribs by falling on some rocks: bruised/stretched muscles, but nothing broken. It took a couple of weeks to really heal, but I also surfed on it twice and went for a hike, which definitely prolonged the injury. So don't do that, and do keep taking ibuprofen to keep the swelling down, and hopefully you'll be back out soon :-)