Here are the photos of a really good day at Hookipa.

Let's start with this beautiful bottom turn by Taka. The more I see the new Smack the more I want to try it. The yellow panel on the leech is dacron (hence, way lighter than monofilm or x-ply). The next dark one is a super light x-ply. The core is heavy duty x-ply. Having less weight on the outside of the sail makes it really light every time you move the sail around, especially in the jibe, but also in the bottom and top turns. 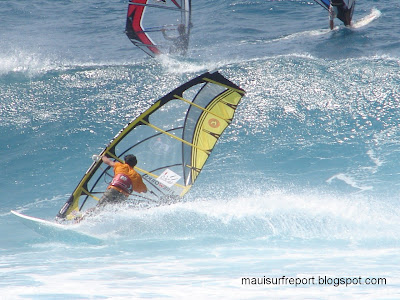 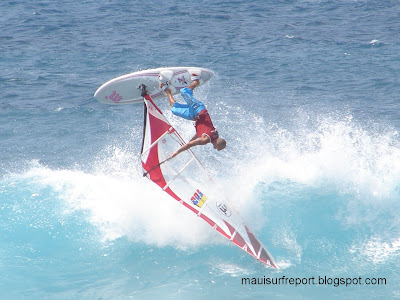 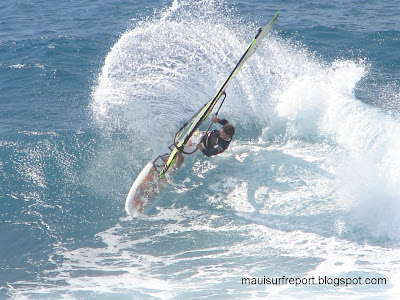 I remember that Taka closed a sick move while I was taking a photo of him. Now, when I take a photo (at least with my cheap camera), I don't really see what happens next... so I'm not 100% sure this is the one I'm talking about. But, closed or not closed... what the hell of move is it?!? Forward off the lip? Graham, anyone... any guess? 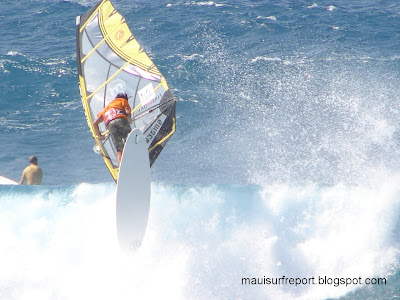 Jason Diffin bails out in a very composed way. 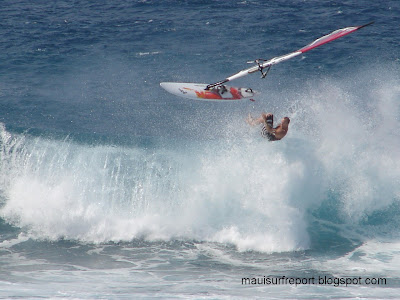 Plenty more shots in this slide.

My sessions.
This day at Hoo was magic for me. I went out pretty early and for at least one hour we were like six. The wind was really light on the inside and the waves were glassy and smooth... not much power in the sail in the bottom turn, but... who cares when the water is so smooth and you can feel every single inch of the rail!
For the second time in my life, I felt the tip of my fin twist in a bottom turn.
Just to let you know what kind of feeling the absolute lack of chop allows you to experience.
It's official: glassy waves... I like them better than women!
Talking about which, sorry for this boring windsurfing post after the piggy one...

The day after, the first big south swell of the summer season hit. Everyone was on the south shore and I scored a really fun session at Hookipa instead, unusually uncrowded and head high (and glassy!).

And the day after (that'll be yesterday) I scored another beautiful sesh in one of my top 5 favorite surfing spots, this time on the south shore. Once again, glassy, shoulder high perfectly peeling waves. 12 people for an hour before unfortunately the crowd doubled.

Today, new N swell and Hookipa was a hell lot of fun with plenty logo high sets in the late afternoon. I went on the rocks, but no big deal... a few new holes in the board, already being repaired.
Tomorrow the waves should be slightly bigger... could be a Kanaha day.

AND, check this southern pacific weather map modeled for tuesday evening... geez, that fetch is huge and it's aimed straight towards Hawaii!
That means that, if this forecast will be confirmed we'll have another (bigger) south swell right in the middle of next week (can't wait to see the photos of the Teahupoo tow-in sesh).
Wednesday is going to be big. Really big. Epic Maalaea kind of big. I'm telling you with 10 days advance. Start planning calling in sick...

And now, time to go sip a well deserved beer at Jaques. What a life.
Rest of the world, excuse me if I'm loving it.
Posted by cammar at Saturday, April 19, 2008