First of all, BIG thanks to Griffin who drew my attention to this thing semi-hiding all the way downwind on the bluff... I would have not seen it otherwise. 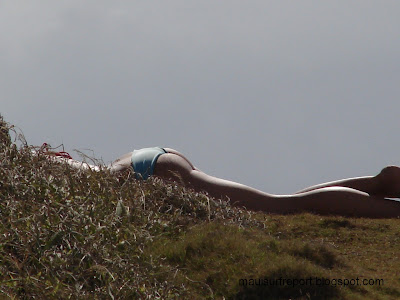 Here's a funny story. I'll put photos of today's session at Hookipa here and there so that it hopefully won't be too boring.
Yesterday morning at around 11.30 I pulled in the parking at Hookipa. Only two sailors were out, both on Superfreaks: Andres and Ray. On the beach a photographer with a huge lens and two other people helping him.
I went straight to the photographers (who I had never seen before) and without even saying hi, I go like:"a Superfreak photoshoot and I'm not involved?"
They looked at me with an expression like:"who the hell are you?"

Ok, first break. This is Andres. 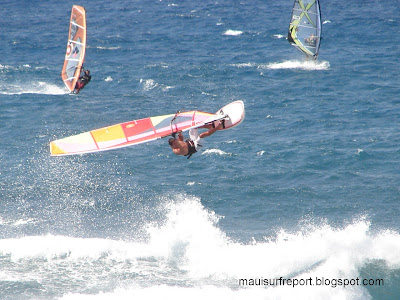 I asked:"do you guys mind if I jump in?"
What looked like the boss said:"thanks, but I think we're ok for now"
What?!?! I need to talk to Jeff... I tried to call him a few times, but there was bad reception and I just couldn't hear him.
So I sent him a text message:"sf photoshoot at hoo. Should I jump in? 4.7 with dolphin or 5.0 UL?"
He replied:"five".
Oh, now we're talking!
So I rigged the 5.0 and went back to the photographers saying:"I just talked to Jeff." - come on, that's just half a lie - "He needs photos of my sail too".
"Oh, well... alright."
"Any particular instruction?"
"No, no... just cruise..."
They seemed not particularly excited...

Here's Glenn. Love the water coming off the rail. 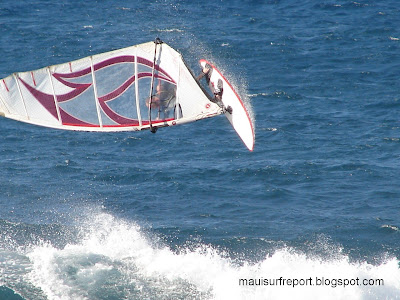 So I got in the water and did the best I could until the wind got just too strong.
I went back to the photographers:"I think I'm done, I can't hang on the 5.0 anymore"
One of them replied:"Now, what does 5.0 exactly stand for? Is that a measurement of the sail or what?"
... wait a moment, there's something wrong here...
"Do you guys know anything about windsurfing at all?", I dared asking.
"Well, honestly not much...".
"I'm just curious... how come Jeff called you guys then?"
"He didn't! We called him. This is a photoshoot for the advertising campaign of this new lens from Canon. We contacted Hot Sails Maui because we found out they have the most colorful sails in the market and we also asked for a couple of sailors to hire..."
"Ops... now I understand! Well, sorry about that, it was clearly a misunderstanding..."
"No worries. By the way we got some pictures of you too!" 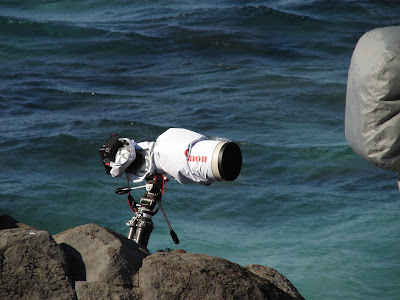 In other words, I brought the art of sneaking in somebody else's photoshoot to the extreme.
Out of something like 3500 photos that those guys took in two days (6 hours sailing each day... Andres and Ray are absolutely wrecked!) they will keep only two for the ad and delete all the others of them... mine ones instead, will be kindly sent to Jeff!

The most colorful sails on the market... you don't need to be a windsurfing expert to figure that out... check this one out!!! 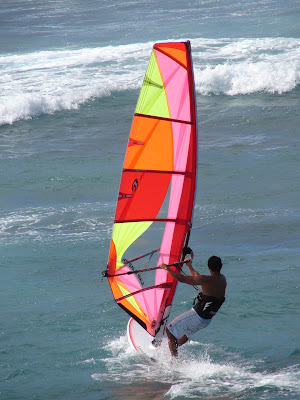 Ok, end of the story. By the way, I actually have a spare 5.0 superfreak in my car so if somebody would like to give it a try, email me and I'll be happy to lend it. In case you want to try other sizes, Kanaha Kai has plenty demos too.

Today, as forecasted, there were some fun waves out of NW. Even though they weren't the cleanest ever, I really, really liked the wind that, for a change, was a few degrees onshore and, as such, not gusty! What a difference!
This is Fabrice Beaux. 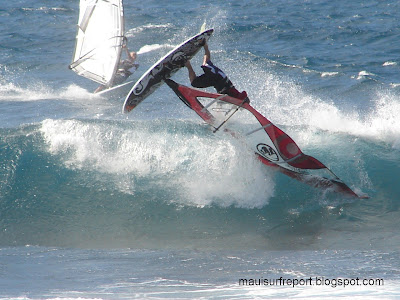 Andres again with his backloop n. 216 in two days. 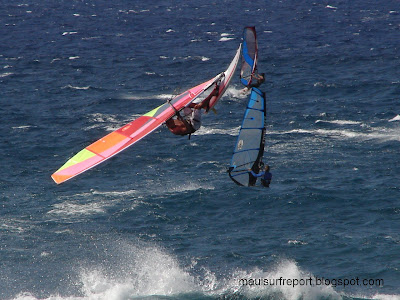 Tomorrow is another day.
Posted by cammar at Tuesday, April 01, 2008

Stupid question but did you find out anything about that new lens? Really cool looking sail, by the way!

My goodness you are in a prolific posting mode..MSR..almost updated daily! You are such a jammy bugger with these photo shoots, I never knew anyone who liked having their pici being taken more than you do!

Great shot of the freak and Andres in his 'sunday best' modeling shorts....

Ely,
I didn't. The only thing I heard is that it will be quite expensive...

Sharon,
I, instead, don't know any windsurfer who doesn't like to be taken photos. It's also a way of checking your style and trying to improve it (sounds true, uh?).

There was an anonymous comment that stated that those sails are ugly. Sorry, I rejected it and then regretted, but couldn't retrieve it.
Anon, evidently you're not the marketing manager of Canon...

Phew, what a crazy couple of days that was!

Do you know Italians who are not a bit exhibitionist??? ;-)
SFs are great! I bought a used SF (yellow-white-green) from HSM but they sent me a different sail. It turned out that the model I have ordered was misplaced so Jeff sent me a brand new one (same color)! Jeff really rocks!

Wow, that is a huge lens!
Does it disappears back in the camera when you turn the camera off? ;-)

Thanks to Glenn, who told me the name of the misterious NP/RRD sailor.

well done ... italians do it better!

Ciao Mat,
yes, that's Fabrice.
Nope, I have no idea of what are the custom taxes you have to pay in Italy when you buy boards and sails abroad... sorry.