Not sure if he meant Hookipa sessions or in general, but that still gives you the idea of how good it was.
I gave it a 9 out of 10. But I'll talk about it later on. First, the photos of today.

The photo of the day goes to Maui Surf Report team rider Nico Dramisino.
That shark seems to really be coming out of the water!!! 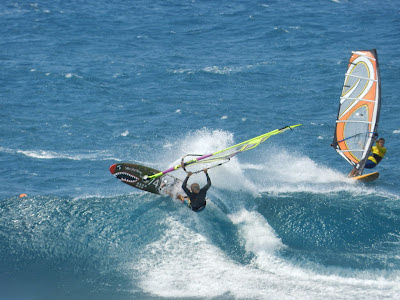 And why is he this blog's only team rider? Because he did this! 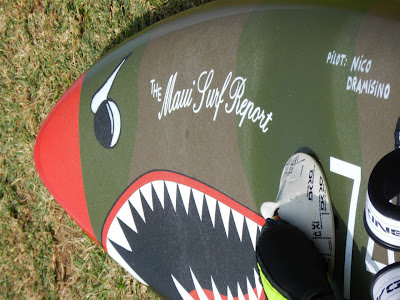 Wonna be a team rider too? Do that and send me a photo of the board and one in action. The latter better be good though, if you want it published! :)

Kauli is not a team rider, otherwise this photo would have been the shot of the day.
I confess I have a weakness for the way he sails. His style is so fluid! I like it as much as I like Levi's... and that's a lot!

Sessions report.
For once, let's go backwards and get quickly rid of today's.
I hit the water around 11.30 and the wind was already horribly gusty and strong. Sailed for an hour, did some fin experiments, didn't have fun at all.
I gave that session a 1.
Sunset session was short (the surfers came out), but a lot better, thanks to the extremely light wind on the inside. I give that one a 6.5

And now, yesterday April 3rd.
I knew the waves were big, so after work I went to check Kanaha. The wind was a little onshore and I decided to go take photos at Hookipa and wait for the sunset session.
But when I pulled into the parking at Hookipa I saw some of the most beautiful waves I've seen in a looooong time.

Kai Katchadourian was rigging next to my car and he pointed out how some waves (the ones with a more northerly component) were peeling all the way from Green Trees to the channel.
On the west sets instead the channel would close out, but that didn't seem to happen very often.
It was kinda big (some mast high sets), but I had no hesitation in saying:"screw the photos and Kanaha, I'm sailing here!"


Jimmie Hepp got this nice shot of me together with a bunch of other great shots of everybody (thank god is way less selective than me!!!) in this gallery. 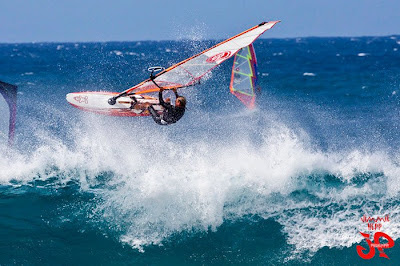 I know there's plenty places in the world where you can do many turns on a wave. For example I will never forget a session I had at Eyzer Fountein in South Africa. I wanted to count the turns, but I always lost the count after 10... it's hard to count when you're screaming of joy! :)
Hookipa instead is mostly a one hit wave. Sometimes two. Rarely three. Very rarely four.

Well, yesterday three was the norm. But it wasn't only the quantity, it was the quality of them.
The wind was light and offshore. The bottom turn zone was often glassy. And when it wasn't glassy, it was still smooth.
I sailed three hours, didn't even get close to going on the rocks and had a total blast.

This not so good bottom turn from the blog author illustrates the glassiness of the wave. 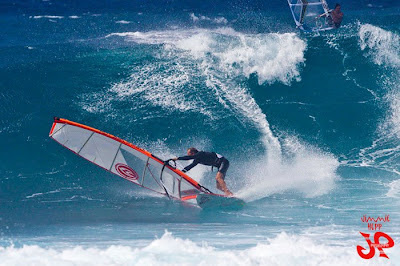 This is the Maui Surf Report. Back to the studio.
Posted by cammar at Wednesday, April 04, 2012

That "Levi's signature something" is absolutely amazing, can't stop watching that picture.

Dani,
I'm not absolutely sure, but I think he actually rotated that thing into a goiter/taka kinda of move and landed it on the wave.
That's when a sequence would have been A LOT better, but I just don't have as much fun in taking them...
Thanks for your comment. Very appreciated from such a good photographer like you! :)

R u sponsoring kiters or should i not even bother???