As the title says, last Saturday the waves were big and the wind was blowing like crazy.

NP was having a photoshoot, that's why you see a lot of their riders in these photos.
Photo of the day goes to Philip Koster. What an aerial!
﻿ 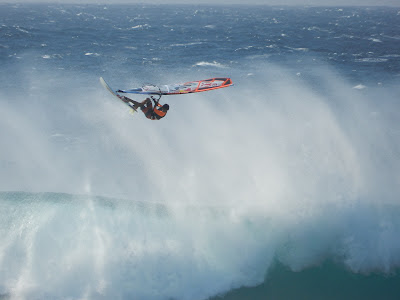 Let's see if you can handle my sessions' report. I had four really fun late sessions in a row.

Thursday.
I went to Hookipa after work: fun waves and a hell lot of guys out. Four water photographers, so you can imagine that all the pros were in search of the money shot!
Seen the slightly onshore wind direction I rigged my 5.0 (not my favorite size at all... I only use it when it's a bit onshore).
Maybe earlier was windier, 'cause I ended up being the one that was on the plane most time (together with Voget). You know... those guys doing those crazy things in the photos above are slogging and you pass them planing... it's stupid, but it makes you feel good!
I was doing my reaches all the way out and catching the set waves.

On a particularly big one, four guys thought about jumping on it (three upwind of me and one downwind). I can take one, but not four!
I shouted:"It's my wave guys... I'm gonna claim it!"
Not sure if they could hear the words, nonetheless they all kicked out. Good.

"Ok now I claimed it, let me try to do something worth on it..."
Good luck with that! In front of me, in the bottom turn zone I could spot:
- four water photographers
- three standup surfers
- four windsurfers sailing out
- four regular surfers

Somehow I managed to find a line between them, and while I leaning into the turn... a turtle pops out a few yards in front of me...
Come one, even a turtle is too much!

Friday.
Day off. Can't remember if I surfed in the morning, but I do remember that I went out early sailing at Hookipa. After that I had stuff to do (read: fat nap).
I drove back to Hookipa to pick out my gear and noticed that there were only a few surfers out. It was still windy and the waves were definitely blown out and poor for surfing... but they looked still fun for sailing. I got in the water at 6 and had the bowl in front of the rocks all for myself till 7.
I don't care if the waves weren't epic, that was an epic session for me anyway.

Saturday.
That's the crazy day documented by the photos above.
If Campello is "way overpowered" on a 4.2, there's no way I'm going out. So I took photos and drove to Kanaha around 5.
The wind had been nuking, but at that point it got light and very, very offshore.
I rigged my 4.7 (biggest sail I'm willing to rig, unless it's onshore) and ventured out on my trusty big Starboard. It says 80, but it feels like 83 to 85 to me. Or it's just because of the 58.5 cm of width...
It was so offshore that somehow it reminded me of Brandon Bay.
Needless to say, I had a blast. Waves were head to mast high. Totally epic.

Sunday.
This goes to show how wrong the 10 men rule is.
The wind was light, the waves were nice and there were between 10 and 20 surfers out all afternoon.
Some sailors chose to sail Lanes. I already had two sessions (SUP and surf), so I had no problem to just sit and wait.
At 4pm, the lifeguard left and a pack of 20+ windsurfers and a few water photographers went out.
The poor surfers that paddled out for the sunset session must have wondered:"what the hell is going one? How come there are still all these windsurfers out??"
Anyway, it was another memorable session and I got this very nice shot from Giora who is now running the mauiwatershoot show. 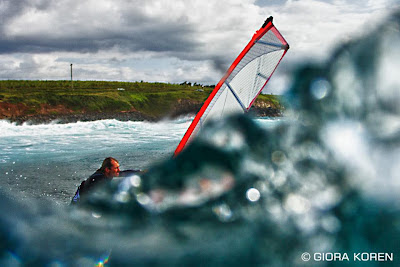 Today is Monday.
I surfed in the morning and did the early sailing session, since I had an afternoon work shift.
When drove by Hookipa at sunset the forerunners of the a new swell were rolling in and they looked absolutely gorgeous. Too tired (and late) to paddle out. I'll try to hit it tomorrow morning early. It's gonna be big. It's gonna be another incredible day to spectate (is there such a word) at Hookipa.
If you're in Maui and you like windsurfing, you don't want to miss out.
Aloha.

Three sports day!
Session two was with a sweet 7.6 Mark Angel mini-gun that i bought today for a hundred bucks... major score! That thing sure holds in the bottom turn!
Riding a new board is like making love with a new woman. It's a world to discover... 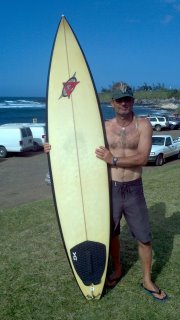 You should be shooting video with your DSLR & make a video...a long, long video. I'm sure it would sell cuz you catch better sailing than most of us see in the best videos;)

First, I don't have a DSLR (and don't want one). Mine is a point a shoot.
It does take lovely HD videos though.
The reason I take photos (single and not sequences) is that I like the challenge to push the shutter at the right time.
Videos wouldn't be as much fun. Also because they would require a tripode instead of comfortably sitting on my beach chair.
And they would be way more time consuming in the post processing.
And nobody would buy them (so many good ones available for free online).

Hi, I wonder why you choose a bigger sail when it is on-shore conditions?

GP,what camera are you using these days? A point-and-shoot makes life simpler when you're traveling too, and you seem to get some great telephoto shots.

Pontus,
when the wind has an onshore component you need a little more power to get going. Not sure why.

Brian,
it's a Nikon Coolpix p500. 36x optical zoom. Very light. It needed me a month of practice and now I love it.

I must say Gioras photo from the back of the wave is astonishing!