Double Lahaina side session for me yesterday, the swell was still solidly into the waist to shoulder high range. This is Jason Hall in an absolutely sick shot (not from yesterday). 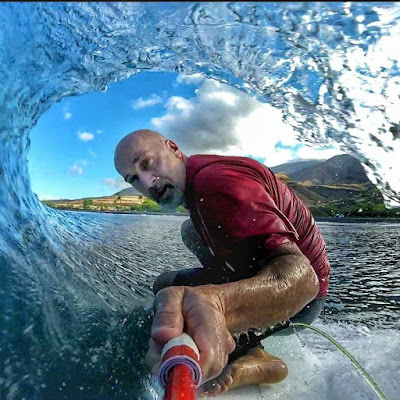 4am significant buoy readings
South shore
Terrible news: the Lanai buoy data is not available. Let's hope it's just a temporary problem, because with the Barbers buoy also down since months, we now don't have any local south facing buoys to rely on. The only buoy that is reading what's left of the south swell is the SE Hawaii one: 1.5ft @ 12s from 180° (S). I believe Lanai would have measured at least a couple of feet 12s, the webcams are our only mean to gather the size (thank god for them!).

2.9ft @ 8s from 82° (E)
1.7ft @ 13s from 320° (NW)
Little NW swell on the rise (we've commented the fetch the last few days). Below is the graph of NW101, Waimea and Pauwela. You can see that when the swell was around 13-14 seconds it was about 2f at the NW buoy and then the size picked up a notch up until the current 4.4f, but the period went down to 11-12. Locally we can expect the same, even though both Hanalei and Waimea are already down to 12s. I drew a red dotted line to show what I think the swell will do in Maui, I'd be surprised to see anything more than 3f at sunset. It's just a weak, rapidly decaying swell. Nonetheless, today it will be a bit bigger than it's been.
iWindsurf.com sensor at Hookipa reads 13(8-18)mph from 68 at 5am, so expect choppy conditions even at dawn.

Should be a classic trade wind sky with little clouds chasing each other.

Current wind map shows:
1) the fetch that is making what will be the biggest swell in quite a while (potentially till next winter, but I've seen much bigger in May and June, so let's stay positive). 6f 14s from 317 predicted by Surfline on Monday. After that, all I see is high pressure for at least 2 weeks.
2) a small windswell fetch
3) a small/crooked south fetch