Morning surf session for me yesterday, this time I managed to have more fun with a better board/spot selection. I'm trying to apply my new mantra accept/embrace/enjoy to Maui's low quality waves. 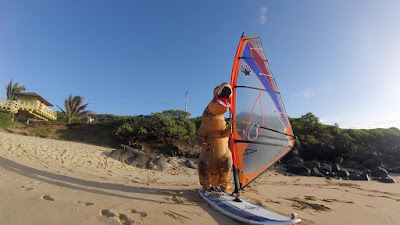 Sailing back to shore. Must have been trippy for the cars seeing this from the highway. Hopefully it didn't cause any accident... 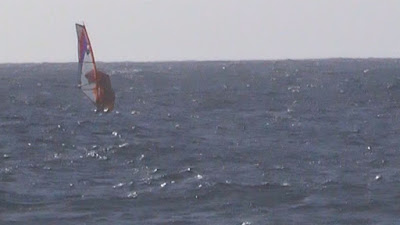 Surfline forecast at 8am calls for 1.9f 14s, Pat Caldwell put 2f 14s in his table, the two buoys above are reading a little more than that (I wouldn't pay too much attention to the contrasting directions), we are a bit groping in the dark here without the Lanai and/or Barbers buoys. That is going to end when the sun will rise and you guys can check the webcams.

In the meantime, based on the wind map of May 3rd that shows a nice fetch (best day of wave generation for this swell) and on the fact that the Hookipa wind sensor is 9(6-13)mph from 78 at 5am, I might just gonna get out of the wind and get in the car to spend my morning on the Lahaina side. Stay tuned for a beach report.

Below are the graphs of the reported buoys. Someone might remember that I mentioned a second bump in this swell when I commented its originating fetch a few days ago. You can see that in the significant wave height black line. What's gonna keep the surf up in Maui, it's more the slow change in the direction of the swell. Now it's coming from around 320 at the NW buoy and that direction sure does not get blocked for Hookipa.

The Surfline forecast even sees it as a new swell picking up throughout the day, as shown in the picture below. However you want to look at it, it should be a pretty good day for the Hookipa sailors and kiters.

Quite a bit of discussion on wind models here, with some exciting news.
First, let me go back to that discrepancy I noticed yesterday between the Windguru models and the NAM one from the Windy website.
When I got to work at 9am, I checked Windguru again and, big surprise, the models were completely different. I guess they got updated in the meantime. In the photo below, you can see on the left the old ones that I posted in yesterday's morning call and on the right the ones I saw when I got to work at 9am. The red circles are the areas of biggest difference. The new updated ones were much closer to what really happened.

Now that we got that out of the way, hopefully we won't need to check those models much anymore.
In fact, a search for "WRF model Maui output" led me to find this page. Unfortunately, there's no "Maui only" model, but it's good enough.
At the same time, my cry for help prompted a weather professional friend of mine to give me a free account on his upcoming Meteogram.com page, on which I found another WRF model output (it say NAM, but it's WRF). Below is a comparison between the 5am maps of the two.

Honestly, none of them is as easy to read as the old MC2km maps, but at least we now have something we can rely on. BTW, when I asked my friend if I can use his maps for my blog, he replied: Use whatever you want on your blog. The payment system works on meteogram, but I am still just giving away accounts. It's not quite done. There are some bugs. You can say that on the blog if you want. Anyone reading your page can have a free account. They can email to sailmaui@gmail.com and if it is referred from your page, they're in!

Don't miss out, when he's done with the website, it's only gonna be a subscription service!
Below are the 2pm maps and they both show pretty strong trades on the north shore.

Another very cool feature of the Meteogram website is the fetches maps. The area with colors are the ones that have winds oriented towards us (along the great ray circles). In my opinion, thanks to the angular spreading, we might get waves also from winds that are not exactly oriented towards us, but that is still a very good indication of how the wave generation for Hawaii looks moment by moment.
Here's what the North Pacific looks like today, for example. I put the same numbers I used in "my" map. Fetch n.1 seems better oriented than I actually thought...

And that's how fetch 4 looks. Mmm... looks like I missed a little fetch in the Tasman sea, but that's gonna get heavily blocked anyway. This is a good example of how an automatically generated map can be more accurate of a human circling fetches by eye. I still love my fetch circling, though...

Wow, that was a lot of info to digest, here's how the morning sky looks from the satellite and I wish all the readers a wonderful day.