I already did a couple of beach reports this morning, you'll find them below this call.
Not much to report from yesterday, here's my lovely coworker Tasha showing a full carbon KT foil surfboard that we have for sail at Hi-Tech. 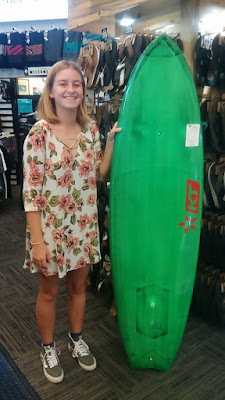 But I calculated the shadow lines based on the emerged eastern tip of Molokai. As I try to explain in that post, that's not exactly correct, because the swells will feel the bathymetry of the bottom also offshore. I say this because the only thing that could explain a 2f difference between Oahu and us is some kind of refraction.
Anyway, more than the size, the problem in Maui is the windswell that this early morning was clearly ruining the shape of the waves. I might be spoiled by the Mentawai perfection I just experienced, but the 4 I gave to the conditions from the beach seemed a little high after I surfed. It was getting better when the sun came out though. Swell should stay pretty steady throughout the day, with the period coming down a second or two.

Here's a beautiful wave at Pipeline, as I was typing this. 20 guys out.

Today the trades should be too offshore for sailing, but I've seen stranger things.

Current wind map shows:
1) an extremely weak north fetch
2) a windswell fetch
Not a good day of wave generation for us.