Yet another fantastic day of surfing in Lahaina. That's Launiupoko at low tide. Just kidding of course, but it really was a very fun clean chest to head high day if you were in that narrow cone of shadow from the strong trades.
The Maldivian beauty below was shot by Liquefy Maldives. 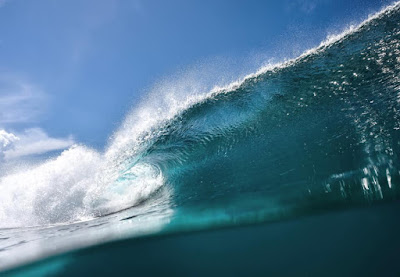 2.3ft @ 14s from 188° (S)
2.1ft @ 12s from 179° (S)
SW
5.1ft @ 11s from 119° (ESE)
We could discuss about the nature of the shorter period energy at the local buoys (it might not be from the south as it seems, but be the wrap of the strong southerly trades windswell that the SW buoy registers), but what counts is that there's still more than 2ft 14s of southerly ground swell at the buoys and that means another day of fun waves on the Lahaina side (probably belly to chest high with occasional bigger sets). I just hope that the other stuff won't ruin it. It sure doesn't look like in this empty 5.25am harbor beauty. Check the webcam yourself before going. 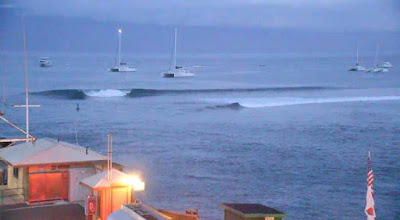 2.9ft @ 11s from 117° (ESE)
Waimea (one of the most protected buoys from the easterly stuff) quietly reports 3ft 10s of NNW energy, while the east facing buoys feel both the Barbara leftover windswell and the southerly trades strong ESE energy. What would Pauwela feel? Probably a bit less of both, but overall there should be some kind of blow out waves also today at windy Hookipa.
Wind map at noon.

Nothing in the North Pacific today.

There might still be patches of wind oriented towards us (as the map on the right suggests), but yesterday's big fetch is now mostly oriented to our east, so I circled in blue and we're going to rely mostly on the angular spreading for that one... a week from today.

Morning sky. Barbara still making thunderstorms but only SW of us. We didn't get all that much rain in the end. 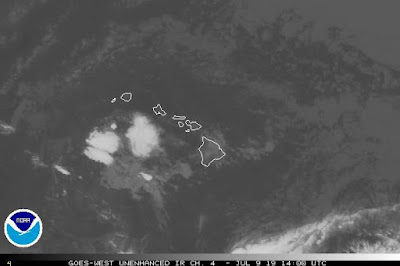