My intense day of action in Kai Penny's VLOG n9 plus a review of the Gofoil NL160.

Really good numbers at the buoys, 13s is a wonderful period for most Lahaina side breaks, particularly Thousand Peaks. Read Pat Caldwell's description to know about the two sources of this swell(s). Probably overlapping, but in my opinion, the closest one is the one that generated the most consistent energy. Below is the collage of the maps of August 3 to 6 (posted already on Wednesday). 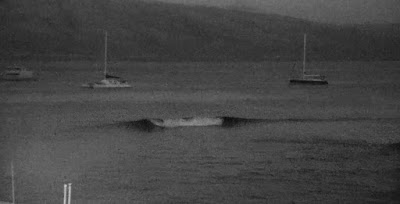 Horrible call yesterday (I wrote flat everywhere), as I completely overlooked the 9s NE energy. There were small waves at Hookipa and on the eastern exposures and there will be also today. Let's see how Pat Caldwell described the evolution of the fetch:
An upper level low 9/5 anchored near 35N, 145W to the NE of Hawaii
has held steady into 9/11. This has made for a large area of gentle
ocean surface winds in the primary trade wind belt for Hawaii and
split the wind swell sources into two parts.

The first part is the local trades that freshened 9/8 and began
weakening 9/10-11 over Oahu. The fetch did not extend more than 100
nm to the ENE. It kept small wind swell 9/9-11.  This source should
fade Saturday.

The second part was a strong high pressure near 50N, 140W to the west
of Vancouver that became established 9/6 and is held into 9/9. Fresh
to strong breezes within 40-50N, beyond 1600 nm from Hawaii, over the
30-50 degree band could generate some low, remote wind swell locally
within 9/12-13. It should be much smaller than the recent
short-period NE event of 9/3-5.  The PacIOOS/CDIP Hilo buoy 9/11 AM
had a few readings in the 8-12 second band, indicating the start of
this low event.  Wave Watch III suggests the onset late 9/11 for
Oahu.  It should rise Saturday and slowly drop Sunday into Monday at
levels below average from 30-50 degrees.

Below is the collage of the maps of the fetches of August 6 to 10 (red arrow) that will help follow.