Another new board got baptized yesterday. This is Russ on his new KT custom. Facebook memories proposed this I shot I took of Alan Cadiz on Sept 2nd of five years ago. It was Alan's return after a long absence from the lineups due to a back injury. Obviously, it was also a much better September start than this year's. September can be heaven (with swells on both sides) or it can be hell (wind and no waves anywhere). The difference this year is that thanks to the wing downwinders, hell is not hell anymore. 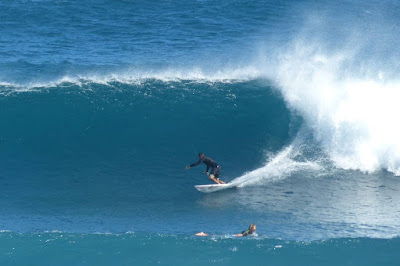 Jeremy Riggs posted an hypnotizing video of a SUP foil downwind run. My comment was: "Monday was my attempt n.29 and I had my longest flight ever. Felt like 4 minutes, was probably less. Just to put things in more "average human" perspective... which you guys are obviously not!"

Side note: one day I had to try one of Dave's board but my paddle's handle came undone. In his extreme niceness, he lent me a paddle for the whole day. I thought it was a backup one, but instead it was his personal one. It was adjustable in a way that it could be shortened to the length you see in the thumbnail below and it had a strap (made of a bicycle tube).  Not knowing what the strap was for, I was perplexed at first and then I figured out how he uses it: he catches flight with the paddle, then he shortens it, then he puts in over his back thanks to the strap so that he can ride the bumps with no freedom restriction in his arms movements. That implies that he (as most of the good foil downwinders) doesn't need the paddle while flying, as they rely exclusively on pumping and an extremely good read of the water.

Small but 14-15s period southerly energy at the buoys, here's how Pat Caldwell described the evolution of the fetch:
Mid Wednesday on southern shores has surf at a summer minimum from 140-220 degrees. Heights are may rise slightly on Thursday. . . A broad area of mostly weak low pressure moved east of New Zealand 8/25-26. ASCAT satellite showed a compact area of gales and a broad area of near gales. NOAA southern buoy 51002 shows a trickle of 14-16 second energy newly arrived 9/2. This should take over as the dominant background surf for Thursday from 180-200 degrees. This same low-pressure area gained strength just east of the Hawaii swell window 8/27-28. It could keep similar breakers below average Friday into Saturday from 170-190 degrees.

Below is the collage of the Maps of August 25 through 28.

He then goes on describing the fetch that created the next pulse that should arrive over the weekend. He put 2ft 19s from SSW on Saturday, which, after the observation of the maps, seems overly optimistic to me. Below is the graph of the Samoa buoy, which only went up to less than 4ft 16s. We'll see when Friday comes, but I would keep the expectations low. 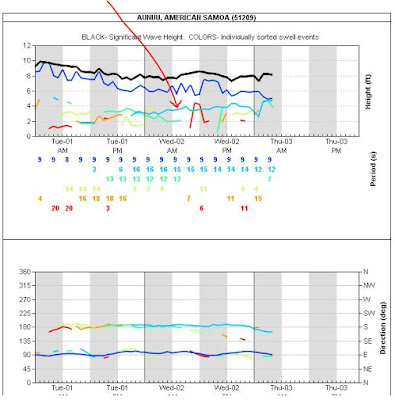 As for today, as usual, check the Lahaina webcam if interested, for size, conditions and consistency of that foot and a half that's at the buoys. Looks like some overlaps between 11 and 14s, the guy just scored a double up.

Small but promising 12s NE energy should be on the rise in the next few days due to the fetch illustrated in the below collage of the maps of August 31 through September 2. Good direction for Hookipa, where there should be better than usual waves.