Wing downwinder yesterday. Art took this photo and captioned it: "GP getting his brand new board baptized..."

My ideal dimensions for a new SUP foiling board would be 5.2x27.5. I tried a couple of smaller ones of the Kalama production line, but they weren't ideal, so I decided to wait until I found a custom one with those dims. Unfortunately though, my old custom 5.8x28.75 is falling apart (got some miles out of that one!), so I decided to get the 5.6x27.5.107L. Haven't tried it on the waves yet (again, this is primarily a SUP foiling board, which I will use for winging until I eventually get a smaller one), but I enjoyed it very much on the wing downwinder. 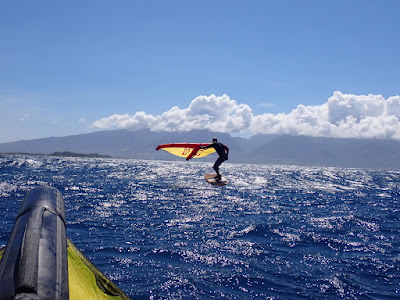 Kai Lenny posted a new 20@20 episode last than 24 hours ago. I totally share the feeling of the first comment he got: "Eagerly watching this... with zero intention to ever actually do it."

Very small southerly energy at the Lanai buoy, check the Lahaina webcam if interested, for size, conditions and consistency. This guy just missed the wave of the day... 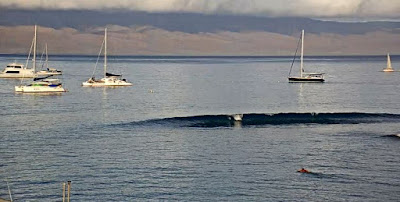 Tiny 11s energy from the NNW won't be noticeable in the water, 4.4ft 8s of windswell will. Small waves at Hookipa, bigger on eastern exposures. This is the fetch that generated the NNW energy on August 28. Not a particularly bad one, but too weak from that far away.