First NW swell of the season did not disappoint. Here's Annie Reickert cracking the lip of a classic Hookipa closeout section. It was the usual shock for me to go back and surf the very imperfect waves there after 4 months of perfection on the other side. I did enjoy the challenge though. 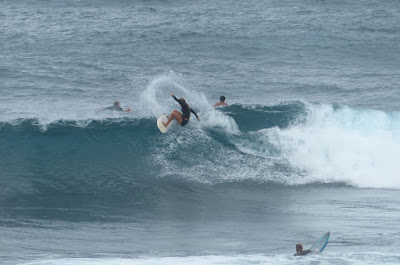 Later on it was time for me to finally ride some waves winGfoiling with cross shore wind and, despite knowing it wouldn't be the ideal spot for that (which would be a spot where the waves stand and keep rolling with a decent steepness rather than breaking), I chose the familiar environment of lower Kanaha, where last year I had many wave winDfoiling sessions.

Turned out it wasn't familiar at all for at least two reasons:
1) The number of other wingfoilers was high (many more than the regular windsurfers and kitesurfers). 90 % of them (me included) had no windows and I was stressing out just trying to be aware of what was going on around me.

2) When winDfoiling you don't have a choice: you have to ride the waves with the left foot forward. When winGfoiling instead, you can choose which stance you want to have. As a goofy footer like Steve Tobis in the picture below, I preferred to ride them right foot forward (can be a lot more aggressive with the lines), which meant most of the session was spent like that and my body did not like that at all. I can easily do a whole Maliko run in that stance, but I'm never doing cross wind reaches, which are a lot harder on your very crooked body. I feel like my hips were getting pulled out of alignment and I'm looking forward to finding out what kind of exercise I can do to compensate the very asymmetrical workout that riding waves on a wingfoil board turned out to be.

By the way, last year there were already wingers at Uppers, but not many at all were good enough to ride the waves at Lowers, so I consider my self very fortunate to have had so many solo sessions (in light wind) on those beautiful lefts. By the look of things, that is not going to happen again. 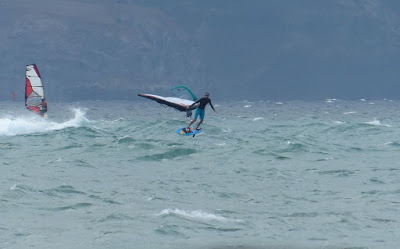 Hookipa was closed from around 2.15pm to 5 pm, after the surfers saw a shark attacking a turtle. When I pulled in, the completely empty lineup looked pretty surreal. Didn't take much for Pavils to get fairly populated again at sunset. Beautiful light. 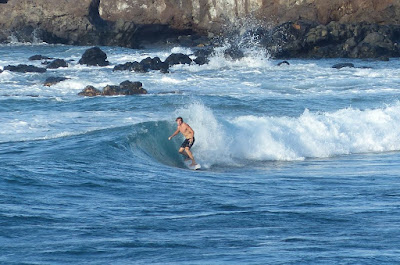 Not quite the 2ft 14s Pat Caldwell was calling for, but much better than nothing. Check the Lahaina webcam if interested, for size, conditions and consistency. 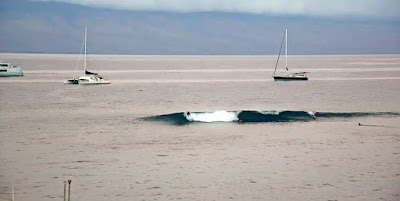 As predicted, the NW swell peaked mid day yesterday, today it should be a lot smaller before disappearing completely tomorrow. Probably still chest to shoulder high at Hookipa to start the day with.