I finally found the time to edit the Kai Penny episode n.8: The bean burritos.

Biggest swell since mid July (doesn't take much) is on the rise, here's how Pat Caldwell described the evolution of the fetch.
The strongest austral mid- to high-latitude system near the Hawaii swell window in over 6 weeks unfolded 8/28-30. Severe-gale to storm-force winds grew seas within 30-40 feet south of 50S to the S to SE of New Zealand by early 8/29. SW surface winds in this area are closest in proximity to the great circle route of 190 degrees to Hawaii. The brunt of the source was aimed at the Americas. The large source area gives better odds for angular spreading to bring the long-period swell to Hawaii

Below is the collage of the maps of August 29 though 31 which will help follow the above description.

Check the Lahaina webcam if interested, for size, conditions and consistency. Long travel distance and angular spreading will make the long period ones very inconsistent, but there's also the shorter period leftover ones. 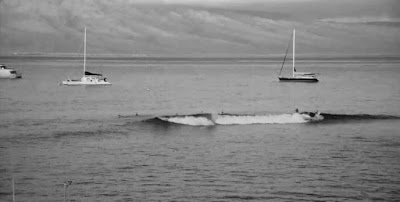 9s NE energy is on its way down, but there should still be some waves at Hookipa and on the eastern exposures.