How ironic is this.

While epic conditions were once again blessing the PWA contest in Cabo Verde and the only way the internet surfers could follow the event was a TEXT live ticker (by the way, congrats to whoever did it... I like the style), Dave Troup managed to do the first windsurfing webcast ever from Hookipa on epicsessions.tv

Here's Dave at work. See? It didn't take that much... a video camera, a computer, a cell phone data connection, a few streaming servers somewhere and some bandwidth. Of course this was just a beta test. It could be better quality but hey... I would have loved watching Cabo Verde like that! 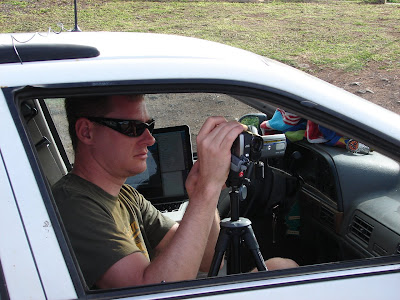 For the records. The car from where he shot from is one of mine. It is now in the history as the car that hosted the first windsurfing live webcast ever... I took a few pics too. I'll post them and comment about the PWA single elimination results.
This is Taka, clearly sponsored by Naish now. 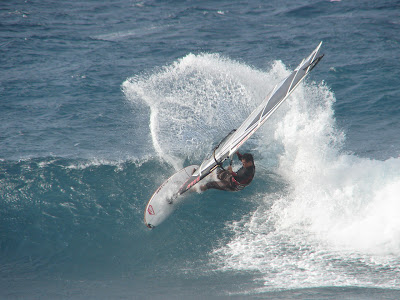 Keith is still sponsored by himself, instead. 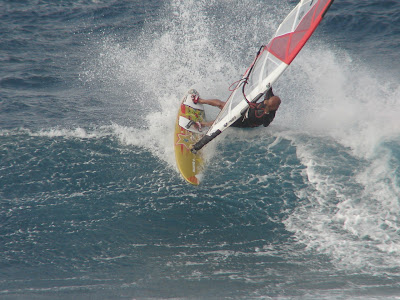 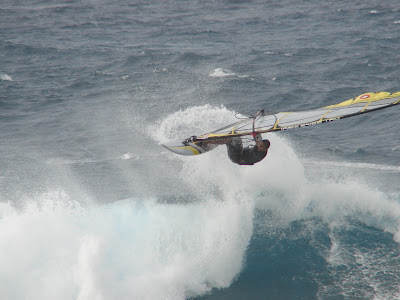 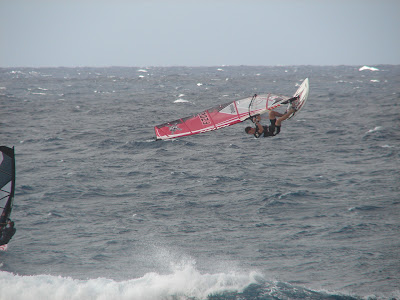 I saw this shot coming, but I didn't have the time to zoom out. So I had to shoot a bit early in order to have both sailors in the frame. Less zoom and a bit later and it would have been a killer shot. 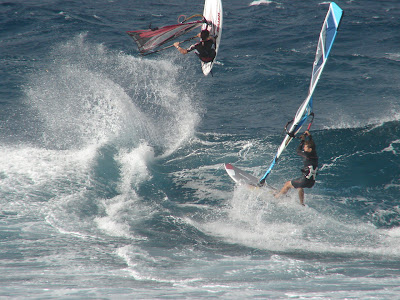 Can't blame the zoom though. Look how close I can get. Totally digging the rail graphic of this Naish board. Nice and stylish. 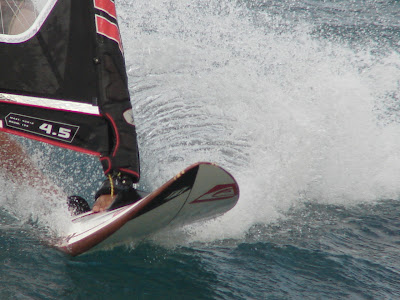 And now a short section dedicated to a few creative friends (who I hope have good sense of humor...). 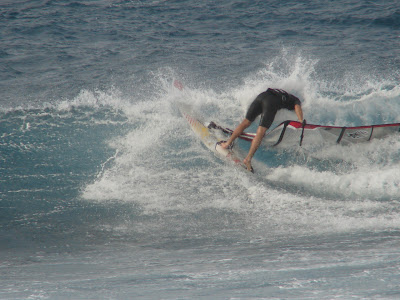 Elena in a "stick a nice butt out" bottom turn. 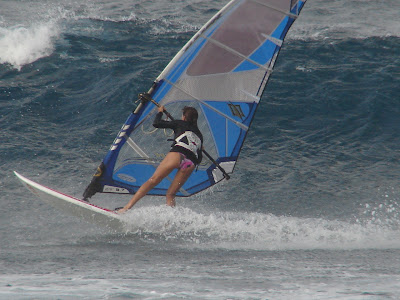 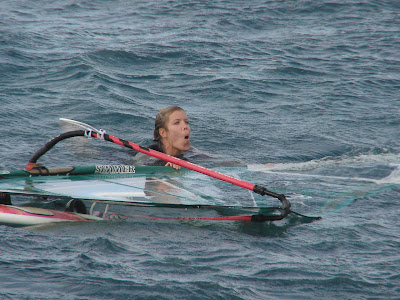 Forgot to comment the PWA results!
Quickly, because I got to go play bass...
1) Kay Lenny almost made the final... shocking! Unbelievable that a 15 year old kid is so competitive already to kick ass like that. Absolutely impressed.
2) A few days ago, I was at the Hot Sails shop and with Tom and Glenn we bet on how Francisco Goya would have done after so long away from competition. Guess what I said... bloody fourth, that's what I said! Forgot what we bet though...
3) Congrats to Kauli and watch out Levi on the double elimination.

LOL! I look like a moron holed up in the car! Too darn funny. Next time I'll bring my real camera. On the plus side, we're figuring out what it takes to get decent webcasts done in remote locations. Thanks to everyone who's been on the webcasts and providing feedback.

And most of all - thanks to GP for the car. walking would have totally sucked. ;-)

Its not quite the first webcast you know.
I watched the 2008 PWA Pozo event live online last year so they can do it sometimes.

Thanks for the great blog.

David,
god bless you for what you did. Its important is huge. Hopefully the slow moving windsurfing world will start to catch up...

Chris,
was it a webcam or a video camera with somebody actually filming and following the sailors?
BTW, a proper webcast is with commentary too. And eventually multiple camera angles (some of which in the water). And replays. And interviews on the beach.
Just watch any surf contest webcast... no, no need to go to the ASP top events... any WQS event in the States will do it. How come they're so advanced?
Let's admit it you guys.
Surfers are smarter (hence richer).

I want replays! is there replays??

Guys:
I indeed saw the Pozo webcast, it was quite decent, unlike the pozo webcams. Oddly enough, the PWA page did not have a link to it, and even in the website that hosted it was hard to find. I remember I mentioned it to you GP but you did not find it.
Hopefully you guys will make this change, the pics from ponta preta look amazing, the spectators can trow stones to the sailors they are so close...
Hey amazing about Lenny right? He looked like he lacks power and strength in the moves but boy he has the style, timing and wave knowledge of a veteran!
Cheers!
Marcos

Hi Sierra,
no replays for this one. Again it's just a beta tests. Plenty replays in surf contests. The have the heats on demand in which they show the best waves of the heat.
And if they were organized in a way that the web user could select them without knowing the heat winner (which they haven't figured out how to do yet... maybe they're not that smart!), the user would still have the suspence of guessing who the winner was.

Marcos,
from what you say, sounds like it was a proper broadcast. Oh well, then Dave did the first live windsurfing broadcast from Maui... still quite a title for my car!
Spot on with your comment about Kai: style, timing and wave knowledge of a veteran! And how about the heat strategy (I know because I judged him at the Aloha classic a few years ago) and the nerves? And when in a few years he'll have the body and strength of an adult... oh my!
He's a true waterman with super high skills in all water discipilines you can think of. And he's obsessed with winning. Not necessarily a soul surfer, but an extremely motivated competitor.

hey giampaolo, I like that picture, let's barreling bro!
My new Quatro is alredy badly broken after 6 weeks, weard...
So I'm back on a true value goya 81.