Downwind attempt n.17 for me yesterday. It was in Kihei and with conditions not quite as good as three days ago (the wind was a bit offshore). I had the Maliko 200 this time and I could only get it flying four times, but when it flew, it was easier to move around and follow the bump. I had the longest glide so far and that felt like a couple of minutes. But then I thought that the wave rides from the reef to the beach on the north shore are two minutes, and that glide was probably half of that! Time runs differently when you're on a foil on a downwinder...

Before that, I searched for decent waves and the only place that had some occasional ones was Honolua. But even though the picture below might look good, it was really a 1.5 for the Bay and I preferred to save my energies for the downwinder. 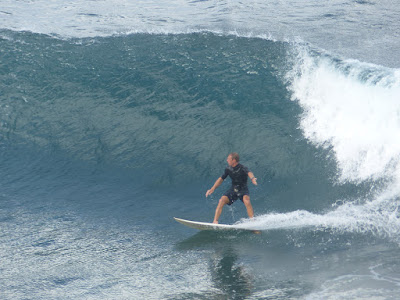 Even earlier in the morning, I stopped by the harbor. This looks like a grueling workout by Connor Baxter and his buddy. 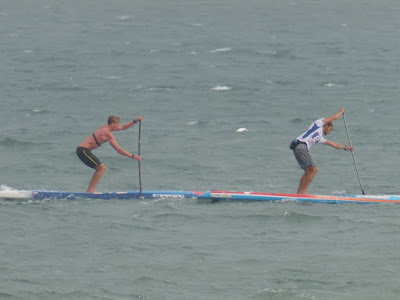 We launched at Keawakapu beach yesterday and we had to time it the lack of sets that occasionally reached up to head high. No idea if the surf spots were working, plus it was windy, but there were definitely 17s waves in Kihei yesterday and I guess today there will be 15s ones. Lahaina side, Ukumehame included, was ankle high.

6.9ft @ 9s from 30° (NNE)
6.5ft @ 16s from 321° (NW)
NW swell peaking this morning locally, but the NNE energy will still play a big role in the water, specially looking at the size at the N and Mokapu buoys. The NNE one will be very noticeable because it's very consistent and stormy. The NW swell will have much longer and defined lines, but unfortunately not particularly clean because of the interaction with the other one. The local wind will play the most important role, as usual. Today might not be as strong/sideon as the past days. Big waves at Hookipa unsurfable for most, look for other sheltered places... good luck!

Wind map at noon proposes a more favorable direction for the wind/kite surfers.

North Pacific's strong low in the NW corner has moved north and today it only offers a small WNW fetch. I forgot to circle the local NNE one, which has been in place for something like 4-5 days now. 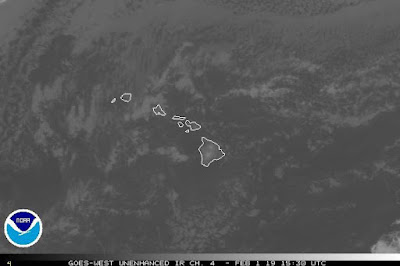