A SUP foiling and a wave windfoiling session for me yesterday. Tomoko puts a lot of time into taking photos of the other foilers, it's nice to see a photo of her. One of the most smiling humans I've ever met. By Chris Pagdilao. 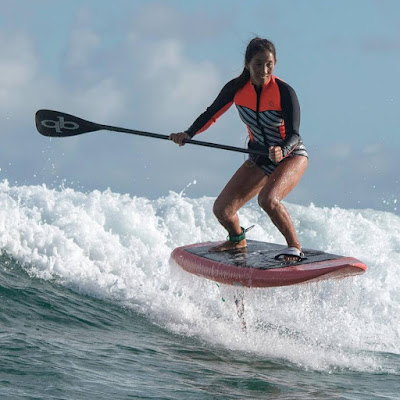 This is a small album by Jimmie Hepp documenting the poor conditions at Hookipa. My wave windfoiling session was fantastic instead. Just like when SUP or surf foiling, when windfoiling the quality of the waves doesn't really matter. 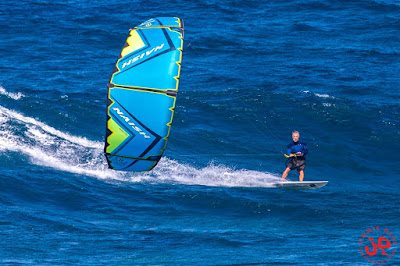 Westerly energy trending down at Lanai. Yesterday I taught a lesson in the Ukumehame area and the waves were knee to thigh high, so today they should be smaller than that.

3.6ft @ 15s from 318° (NW)
New NW pulse is reading almost 7ft 14s at the NW buoy. Below are the graphs of NW (dark blue line) and Pauwela (light blue line) together with the Surfline forecast, which indicates exactly 3.6ft 15s for this morning. Might build a tad more in the morning, but not much. Still 5.2ft 8s from 34 in the water too. No much wind at my house as I type, so Hookipa might be decent and overhead, but I have a feeling it might be morning sick like yesterday. I'll report before 7.30am.

Here's Pat Caldwell's attempt to describe the complex fetches evolution of the last few days that generated today's and tomorrow's NW swells. Arrivals times are for Oahu.
The next wave source in the northwest Pacific series had severe gales over a short fetch following a front eastward from east of Japan 1/31-2/1. It weakened as it reached the Date Line 2/2. NOAA NW Hawaii buoys show a low rise in the 16-21 second wave period bands early Monday 2/4. This event should be short-lived, peaking on Tuesday morning from 280-310 degrees. The Niihau-Kauai shadow on Oahu makes for larger error bars on the surf estimates.
A much broader, stronger low pressure pattern formed 2/1 east of the Kuril Islands. A wide, long fetch over the 285-315 degree band nosed to near 165E with seas above 25 feet by 2/2. The winds weakened steadily 2/2-3.
Long-period forerunners are due late Tuesday from 285-310 degrees. This event should peak on Wednesday below the winter average from 285-315 degrees. It should slowly decline on Thursday from the same direction.

Did anyone notice that the Surfline forecast's scale is set at 25ft? That's because of a massive very closely generated NNW swell that is predicted around Sunday the 10th. Surfline calls for 24.6ft 15s on Sunday night. Notice below how close the fetch is. That means active winds on it and extremely rough waters. Not even Paia Bay might be surfable on the north shore that day, while the harbor will be closed because WSL is going to run a Big Wave tour contest at the jetty. Just kidding.

That extremely remote fetch in the South Pacific is no longer in place, and today there's one that is not aimed straight at us, but we might get a bit angular spreading out of it. That energy might overlap with the one travelling from the remote spot we saw in the last two days. No idea of how what the interaction will do. Probably not much, just overlapped arrivals of sets. If any. 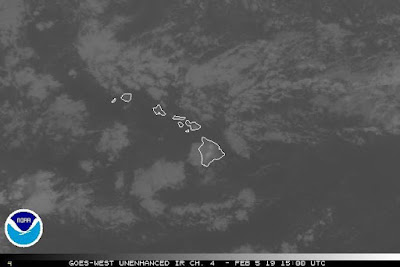