Two sessions yesterday, both good thanks to the lack of wind that obviously made a huge difference.

It made a huge difference (this time for the worse) also at Honolua. This is Tanner Hendrickson in a photo from Jimmie Hepp and you can see how much the wave was missing the offshore trades. 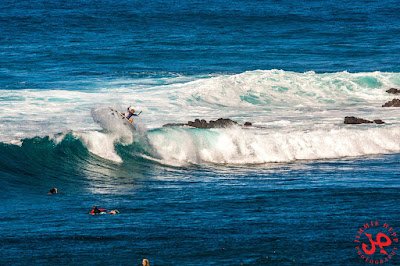 I took these photos at sunset at Hookipa. It was glassy, but far from clean with a lot of energy in the water and some solid triple overhead bombs at green trees. Some guys were practicing on their Peahi guns, but this one was ripping on his shortboard. 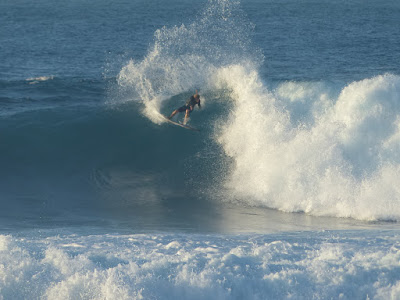 Last year's Peahi challenge winner Billy Kemper in a stylish bottom turn with the vision of a big blue wall. 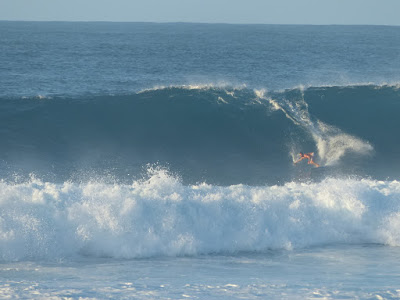 Shortboarder still on a tear. That was a mean section and he smashed it. 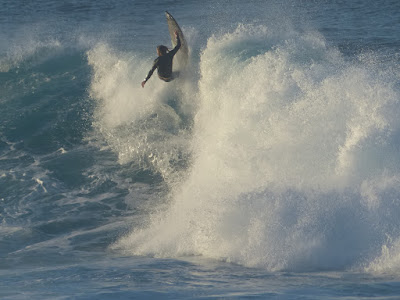 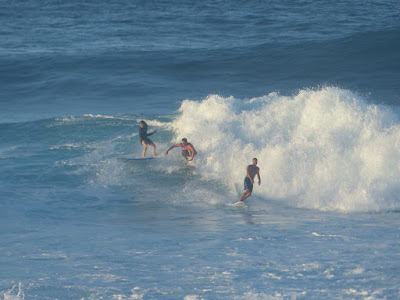 It was beautiful on the hill. I love the mist created by the waves. 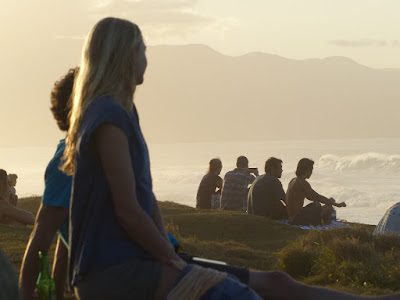 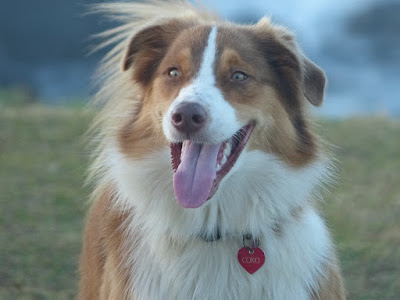 Matt Meola and Francisco Porcella got caught in the channel by a big set and got pushed all the way inside Lanes. Francisco kept paddling and eventually made it out (took him forever), while Matt chose to come in there and walk his way back to Hookipa. He does look a bit rattled, but someone told me he paddled back out again. 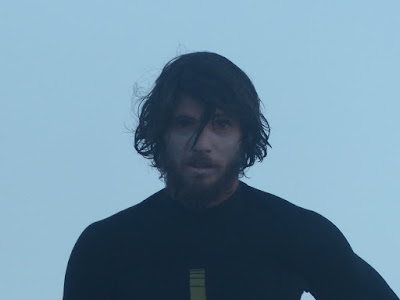 Significant buoy readings 3am
South shore
No energy from the south, check the Lahaina webcam to check if there's any wrap.

3.1ft @ 9s from 1° (N)
2.3ft @ 11s from 340° (NNW)
I woke up super early because I wanted to hit the Bay at dawn, but with these numbers at the buoy I got a better (smaller!) place to surf. Big north swell and no wind is a delightful combo for it.
This is the wind map of the 7th and I believe the fetch just north of us is the one responsible for today's long period energy fron the north.

Current wind map looks very similar to the one above, so the waves should keep rolling. It's actually better than the one above, because of the lack of the onshore flow.

The windity maps make it a lot easier to spot the fetches and understand their intensity, but I obviously keep looking (and saving on my hard disk) the traditional weather maps. I occasionally like to post them, specially when they look like this. Two impressive lows ruling the whole north Pacific.
They usually look like a pair of clown eyes and usually the clown looks like he's screaming (like on the 7th) because the high pressure between the two lows is round and looks like an open mouth. This one instead is narrow and looks like a crooked nose.
And after this explanation, I can now proclaim that Crooked nose clowns are better than Screaming clowns.

NAM3km map at noon calls for 6 knots from 50 degrees. A bit of texture in the afternoon, but the morning is going to be light offshore first and then glassy.

The WSL guys corrected that weird call (must have read my post yesterday) and now the Peahi Challenge is scheduled for Friday morning. This year they're gonna have the girls too, this is the list of all the competitors I found on this page.

I look forward to watching it even though it's gonna be hard to beat last year's incredible show.
Surfline calls for 14f 15s from 335 at 8am, so there should be no lack of size. Last year the Pauwela buoy was 12f 16s at the same time, so it should be comparable.
Stoked to see Francisco Porcella in it, but I would have loved to see also Marcio Freire in the Event Wildcards, since he's the one who was surfing Jaws for years by himself with no safety around before everybody else realized that it was actually surfable.

The frame below is taken from a video by Aldo Messera and the time stamps says Feb 14, 2008. There were other people that surfed it before him (Matt Kinoshita being one of them), but he just kept going by himself consistently for years, launching off the rocks and catching serious bombs with no one around (going mostly left). He belongs to the history of the place, he should have been invited.

I wonder who the three WSL wildcards will be. John John Florence and Kelly Slater and are the names I would like to see. 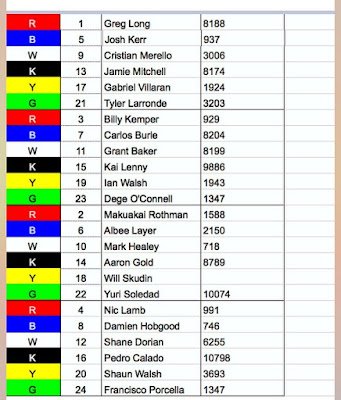 Well, now it's 4.30am and I'm already done with the call. What the hell am I gonna do till 6?!?
I guess I'll go on Dr Greger's website where there's always something to learn about nutrition.
Dr Greger and his team read ALL the scientific studies that are published and summarizes their conclusions for us.
Here, I just watched this video and all of you with knee pain might find it interesting. I'm gonna add a teaspoon of sesame seeds to the ones of flax and chia seeds I already grind every morning in my fabulous breakfast.