Couple of surf sessions for me yesterday.
I gave a 3 to the Hookipa conditions in the early morning beach report, but when I jumped in the water, despite the fact that it got even glassy for like 20 minutes or so, the waves were so jumbled up and coming from so many directions, that I gave them a 1. Amazing how bad Hookipa can be even without active wind on it. Afternoon session at a different spot was difficult but much more fun.

Big day at the Aloha Classic. The results are on the AWT page where is also where I got this shot of rider Fiona Wylde by Si Crowther. 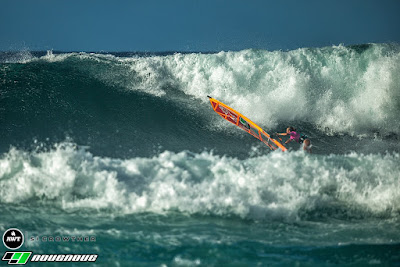 4am significant buoy readings
South shore
No energy from the south recorded at the local south facing buoys that are only reading the NNW wrap. It should be pretty flat, but you should have a look at the camera nonetheless, because at the size and direction indicated below, even Lahaina can get some of the wrap. If you see A-frames and rights at Breakwall, that's the wrap.

Below are the graphs of the NW and the Pauwela buoys. Notice the sharp rise, consequence of the proximity of the head of the fetch (I pointed that out two days ago).
From the readings above, also notice how the N buoy is higher than the NW and that Pauwela is higher than Waimea. That's because the fetch was aiming slightly to the east of Hawaii and that's where the biggest waves are travelling.

I hope that the regular readers by now will have an idea of what a size, period and direction mean for our shores. 10f 15s from an unblocked direction like 331 means pretty big waves on the north shore. Jaws will be breaking, Hookipa will be too big.
Hopefully Sunset beach on Oahu instead won't be too big so that they can start the HIC pro contest that has been on hold for quite a few days.

Let me also remind you that the Molokai shadow line for Honolua is 335, but this swell is big and long period enough to hit the west side without much blockage. The Bay should be at least double overhead. And this swell is relatively small compared to the one forecasted by Surfline for Tuesday at 17f 15s from 342. Pat Caldwell posted a 10f 20s in his Oahu table for Monday.

Current wind map shows another exceptionally long fetch which means that the big waves are not going to end any time soon.

NAM3km map at noon shows some wind, but with waves this size, I think that's not gonna be enough for the contest.