Early morning Hookipa surf session was fun, even though that 6 I gave the conditions was more like a 5 if judged from the water. It got a lot better later on in the morning as these pictures taken around 9am show.
John Gangini has a very good read of those right off Green Trees and makes it all the way to the channel most of the times. 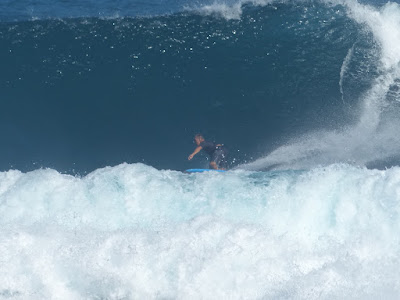 There we go: another middle aged Hookipa good surfer (Greg Maddock) is now riding a Jimmy Lewis 7.0. Those are great boards, but I refuse to get one. I'm not that old yet. Maybe one day. 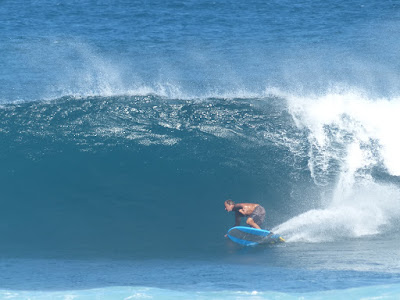 Here's someone to be inspired by: Jerry doesn't even need a board! 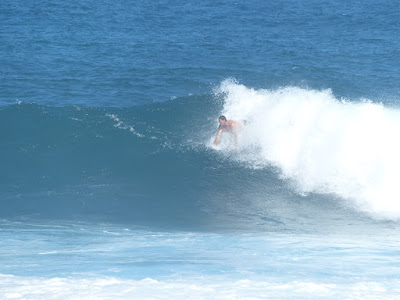 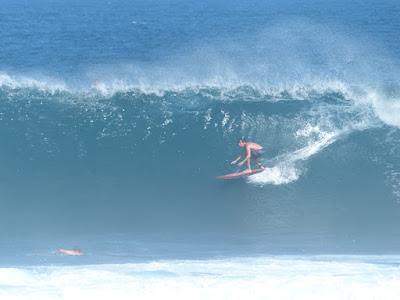 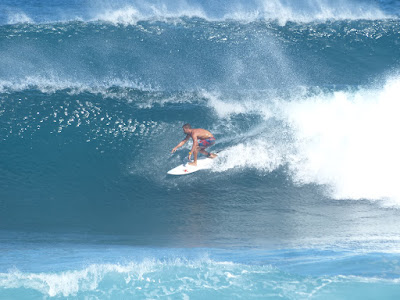 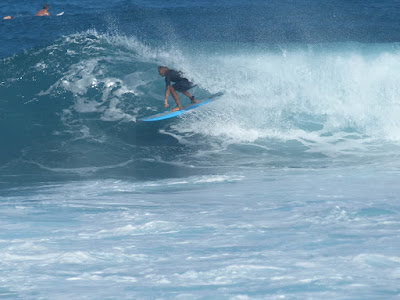 Later on the windsurfing contest took over. I kept taking a few shots, here's Robby Swift. 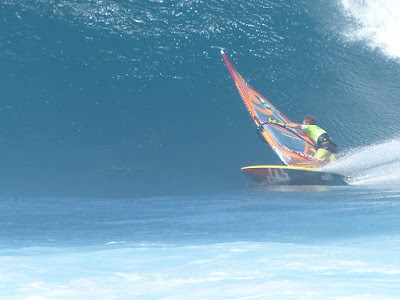 Here's Morgan Noireaux who is instinctively thinking about getting barreled on this one. Unfortunately, he got eliminated by an incredibly in form Kai Lenny in a 4 men heat that only had 1 sailor advancing (Duncan was trying to cut down the number of heats) and that means that the AWT season title goes to Boujmaa Guillol. Remember what I said about the lame locations of PWA tour? Check out the 2017 AWT tour schedule... Baja, Peru, Chile, Maui, that's what I'm talking about! 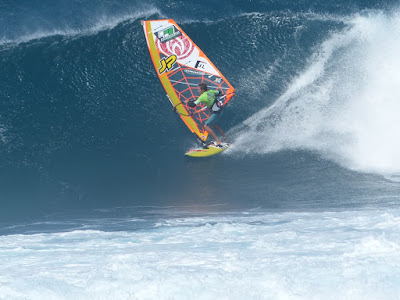 At one point, Kai Katchadourian asked me to step in for him and commentate a heat of the ladies. The wind was extremely light and I knew the action was going to be super slow, so I did step in but without too much enthusiasm.
Little I knew I was going to commentate some action that possibly not even Joe Turpel might ever have a chance to commentate.
In fact, the producer of the webcast was so smart that during the very long lulls of action from the windsurfing ladies, he sent the drone shooting the surfers at Lanes.

Here's a brief list of the guys that were out there: Matt Meola, Tanner Hendrickson, Kai Barger, Kain Daly, Joao Marco Maffini and some other friends put up an aerial show and I was calling the action... are you kidding me? Don't forget that I am very much into watching surfing at any level (when I'm not surfing myself) and do not miss one single heat of the WSL contests (currently watching round 2 of Portugal), so for me that was as exciting as commentating can get.

Here's my ex neighbor Matt Meola in a shot by Si Crowther. 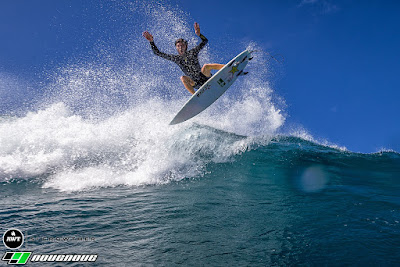 5am significant buoy readings
South shore
Barbers
1.4ft @ 13s from 214° (SW)
Tiny energy from the south. Check the webcam if you feel like.

0.6ft @ 25s from 331° (NNW)
Pauwela
4.2ft @ 12s from 340° (NNW)
0.3ft @ 25s from 348° (NNW)
Lovely 25s reading at the Waimea and Pauwela buoys. You won't be able to see those in the water, but I just love the fact that the buoys can actually register those tiny forerunner oscillations.
It's gonna be a steep rise I said yesterday and that's confirmed by the NW buoy graph (orange line).
18s periods take about 12h to get to Maui, so expect the equivalent of 6f 18s to be in Maui around sunset. Let's hope the shorter period northerly energy at the NW buoy won't make it all the way down here, but I'm afraid that because of the onshore flow, conditions won't be particularly clean. 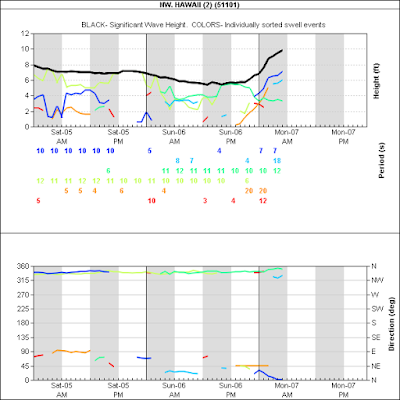 Current wind map shows a new NW fetch taking over the NW corner of the north Pacific while the "old" one moves to the east. In between them a high pressure that will unfortunately bring an onshore flow for today.

That is confirmed by the NAM3km map at noon today. If yesterday the Haleakala could pull off the miracle and offer some borderline sailable conditions, today that is not a chance. Not on the north shore, at least.

And this is the 5.30am satellite photo that shows how we got just barely brushed off the very tail of the front that generated the swell that will hit today. We are so lucky to be where we are. 10 degrees more north and we would get bigger waves, but much worse weather. 10 degrees more south and we would have to face much more heat and humidity. 20.7984° N, 156.3319° W are the Maui coordinates and they are just fine.

One more little story. Yesterday I saw Mark Healey shopping at Mana Foods and, of course, I had to talk to him. I first told him that I was on a boat watching him and Reef Mc Intosh charging huge Cloudbreak in a late May of a few years ago. He remembered the session and smiled with his eyes. Thanks to a wonderful blog feature called labels, I could easily retrieve the post where I posted some photos, so that you guys know what kind of stuff I'm talking about.
Then I asked him if he was here for the 2017 Peahi Challenge and when that was going to happen. He said yes he is and added:"they should really run it on Tuesday, but they won't be ready, so they're talking Thursday, but it's not sure yet".
Very clean looking and nice guy, btw.
Posted by cammar at Monday, November 07, 2016

Thank you so much for this daily report. cant start the day without it!
This is the updated link to the MC2KM if you want to ever use it again (I think its the best for wind in Maui) - http://weather.mhpcc.edu/wrf/maui2/wind.html