Today I made a new rule.

If the conditions are good enough to keep me five hours in the water, it's automatically a five stars session.

This was my answer to Jeff, when he asked me why I wear a harness when I sail on the longboard: "'Cause I need it to rest my arms so that I can sail longer... You're either tougher than me, or I got more spare time than you, brah"... eheh...

A new NNW swell arrived and kept building all day long. At sunset it was often mast high at lower Kanaha.
I had a hell lot of fun and I was trying to take as many videos as possible with my helmet cam, but unfortunately I ended up taking a bunch of photos instead. Most of them are bad, because taken thinking it was the start of a video... Still practicing with the sequence of keys to push. Can't blame the camera ... it's a simple, cheap and fun toy.

When I got out of the water, the display showed 101. That means 101 between videos and photos. Even though I'm mildly disappointed by the result, I just realized a fact.
OK, a little number of shots were not shot on the wave. Like this one showing the beauty of the new Hot Sails Fire (team rider Jeff Sutherland is backwind slogging on the outside). 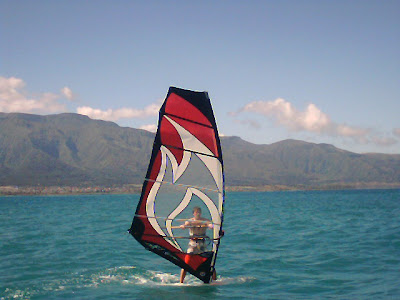 What else can I say after such a gorgeous day?
That tomorrow could be even better...
Even though the NW buoy has dropped from 16 to 12 feet (16 sec. period), the wind is supposed to be a little stronger, so maybe good for the 87l. And even if it's light like today, I'll go longboard sailing again. And if it's no wind, I'll go surfing instead.
Do you understand now why every single day I wake up stoked that I woke up?

Here, let me leave you with what it looked like today. The waves in these photos look a lot smaller than they really were. The West Maui Mountain looks a lot less green that it really was. The ocean and the sky are pretty close, though. 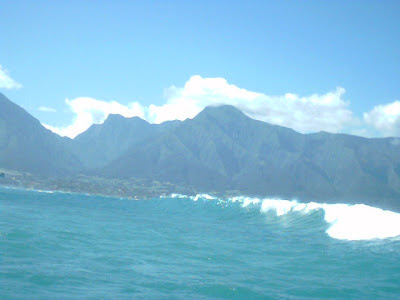 Not enough? I have a few more, but the dropshots site doesn't seem to work right now... Come back later, maybe I'll update this post tomorrow morning.

Just got to add that the last five songs that Radio Rock just played were:
The river - Bruce Springsteen
Watcher of the skies - Genesis
Pinball wizard - The who.
a song from an interesting new italian rock band called PFH.
Live from Rome into my studio in Kuau. Got to love the internet...
Posted by cammar at Tuesday, January 23, 2007

Brian from the PWA again here. Still amazed at the good work! We got a link through from a guy in Cabo Verde with another good blog. Maybe you two should get to together?
Fab delob

...great blog this is indeed, GP is a reel itatalian funny wuuderman, awesome pics on the flickr page the other days, keeps dreaming!
Snow covered north sea coast right now in benelux countries, great, so maybe longbording tomorrow.
Have fun with the rescued Drops!!!
Remaining impressed by your longboardsailing style... and level of stokedness in your stoked-wake-up-paradies!
Photos of the bread automat will follow, had to bring the camera back to the shop...

I don't know about this:

"If the conditions are good enough to keep me five hours in the water, it's automatically a five stars session."

...what if you're out there (I would do this) because you're "not coming in until I (fill in the blank)?

I respect your five star system, and I worry about the arithmetic confusing a workout with a great soul session. My .02

Rock Radio is my new music provider at work now, thanks GP!

Heres what I listen too at the moment... http://abc.net.au/triplej/listen/

Great style on the long board as well GP, love it, might have to invest in one.

Brian, I checked that blog, pretty cool. Thanks.

Oh, I forgot about the bread machine project... It's running at a quite low priority right now...

Good point Michael, but there's no risk of confusion in my body. As I said, if I stay out for 5 hours, it's because the conditions deserve...

Lano, I'm listening to your australian radio as I type... this is so cool!
Unfortunately they speak a little too much on Radio Rock. They read a lot of text messages they get in real time... I guess people like that... maybe not in your office, though!
Try to get the 7am hawaiian time dj. Prince Faster has always been my favorite. What time is that in Australia?

Had another great double sesh today. I may post something later, but right now I have Monica cooking me pasta with shrimps, so you will have to excuse me momentarily...

PS. Hey, they speak too much in Australia too!