Yet another tough day, you guys...

In the morning there was no wind at all. The waves at Kanaha looked like they were closing out a little too often. Alex told me later that he actually got some of the best waves of his life, but he's a damn good surfer and he's regular and that helped him connecting all the sections of the beautiful right. I don't think I would have been able to do the same. Plus, I was still a bit tired from yesterday so I wisely chose a more mellow session at the harbor (with the shortboard, though).
The waves were knee to shoulder high, these last ones having the right push to be enjoyed with a 7.0.
Me and Karl were the only ones on the peak at the buoy. A little chat, a little wave, another little chat, another little wave... good time.

Later the wind picked up and I went out again at Kanaha on the longboard with the sail. The swell was dropping, but the waves were still pretty damn fun. The I saw canadian Jeff ripping a couple at the outer reef of uppers and I immediately sailed over there. Again, the swell was dropping and not many sets were breaking all the way out there. You had to wait 10-15 minutes. But the last one I caught was a beauty. Jeff told me later on the beach that I was at the half of the wave and the mast was in line with the lip. It didn't really feel that big, but if he says so...
I said:"but I couldn't really do any turn... I could only go down the line..."
"It doesn't matter, he said."
Actually, he was quite right. I was on a potentially double mast high wave, on a 12.6 and I wanted to do turns?!? My confidence must have improved a lot lately...

Photos from both sessions here.
By the way, I also found yesterday's ones.

Easy quiz. Check this little video. Let's see who's the first one that spots what there is to spot and posts a comment... (can't see it? Try here)

After two hours surfing and two hours sailing, around 5pm I was debating if to go out again standing up on the 12.6...
The wind, in fact, had died and the conditions were kind of epic out there. 5 people out (Michelle, clearly, amongst them).
Fortunately, Monica called. She had locked her keys in her van and needed a ride home to get the spare. Thank god, I had an excuse not to go out... my body would have not liked it.

Instead, I was rewarded with a spectacular pasta with shrimps that she cooked for me. I hope she'll lock the keys in her car more often...
Check this out. 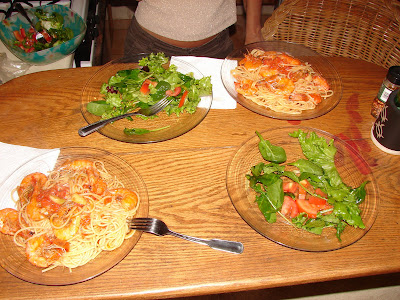 This one, instead, is my latest addiction. Two pistachios sitting on a pillow of Nutella... 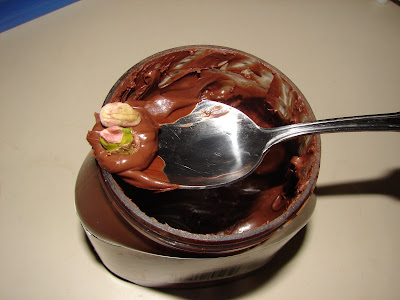 I didn't even check the buoys tonight... I almost hope that it's gonna suck...

I spy with my little eye....a turtle?

Tocca a me. I spy with my little eye....a whale spout?

Interesting the comment from Alex! You know, it just goes to show ..... "if you don't go, you don't know"!! You and I thought it was not gonna be good for the am sesh at Kanaha! You can't even rely on watching other people, cos you don't know who is out there surfing right? Anyway, it did look way better in the pm, and the session I am sure was equally as good. I felt like Kelly on a couple of those waves ;-) making floaters and all kinds of stuff you never get to do on a faster wave. Well, there is no wind and I can hear the waves from my house, so it's time to go to the beach before work, what a life!!

Allright, Sharon won. At around 8 seconds of the video you can see a little whale spout. I kept sailing towards her but I must have scared her because she dove down and she was gone... unfortunately I missed the tail dive... fortunately, the tail dive missed me!

That's true, Meesh. Sometimes, if there's no good surfers out, you can't judge from the fact that nobody is getting good rides... but again, it was prolly a very good day for a regular foot longboarder. Here's what he told me he did.

"I was by far the one sitting more outside. When a big mast high set came, I paddled even further out not to be caught on the inside. I skipped all the close outs and most of the times, after those ones, there was a peaky one that I could catch on the peak and ride it all the way to the right. I was so fast that I was able to even make that supersteep section at the end (the one you can do aerials on the windsurf)".

So, I guess that wave selection was the key for his sesh.

By the way, here's how Pat Caldwell starts his last forecast: More rounds of extra-large surf next week...

No trade winds for a while, maybe a chance for some Kona (port tack) sailing at Kanaha on Sunday.
I love sailing with the Kona at Kanaha.

Kimo, I understood nothing of what you wrote. Clarify, please.

Kimo, thanks for the clarification.

Not owning a TV, I have no idea about that show. It's prolly crap, but I'd like to see it at least once before signing a petition.
What's that, wednesdays 10.30pm EST?
That's 5.30pm HST... forget it. I'm usually doing my own show in that water at that time...