Friday: fifth day in a row of great wavesailing

It was actually my best, thanks to the fact that the wind was kind of light again, but with my big board under repair I was forced to use my 75l... and I had a blast.
One more confirmation that there is ALWAYS something positive in everything.
Sure it was harder to get out across the breaking waves, sure I was slower to get back upwind and so I caught less waves, but once on a wave... what a difference!

I also think I'll join the club of those sailors that never use a sail bigger than 4.7 at Hookipa. No matter how light the wind is, any sail bigger than that just doesn't feel right on a wave anymore.
Considering that I'm convinced that the better the sailor you are the less board and sail you need, I'll take it as a sign that I'm improving... it would be about time!!!

Anyway, I had some really glassy ones with up to two-three turns (that's pretty much the most you can get at Hoo) that really put a big smile on my face.

After that, I started my photo shooting sesh kind of late and I could only take one windsurfing photo. A good one, though: downtown Jesse Brown in a nice aerial. 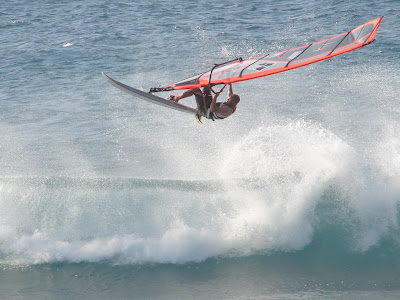 And this is me (thanks Tato again). Lame top turn, but just look at that perfect size (and shape in this case) wave... hey, where's everybody else?!? 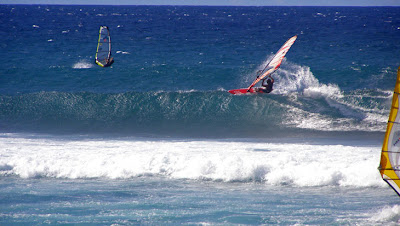 I also took some surfing photos, but none really impressed me. Other than this one, of course... 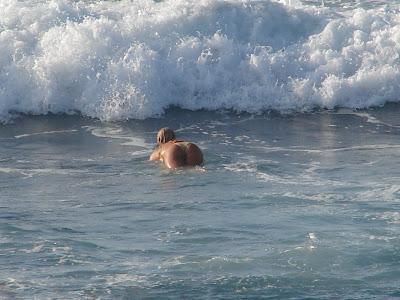 Great Ass on that last shot - I wanna see more !

just keep coming back to this blog...

GP! With all those "duck dive" shots, you could create a calendar that I am sure would be a top seller, with backing from Surfer or Maxim?! ; )

Hi Bill,
good idea, even though nothing can beat the Reef one...
BTW, I do a calendar ever year with some photos of my beautiful self, but that's only for the close female friends...