After yesterday's slog and surf feast, today (Wednesday) the wind was stronger and I was perfect on 4.7 and 68l... and when I'm on that tiny little turny board the fun is guaranteed! 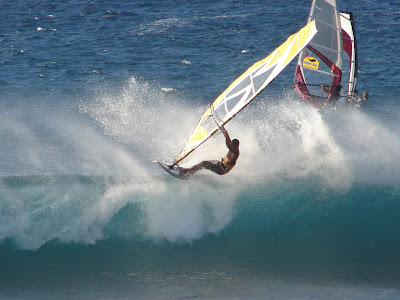 A hundred thousand people out, but still heaps of fun. I feel like spending a few words on the subject.
The key is in the attitude. If you enter the water with forty people out and expect that nobody will either jibe, tack or drop in on your wave, you'll be frustrated.
There's only one way to accomodate all that many people: to share. Three or four people on the same wave is the norm in these days. And guess what, it's totally doable... 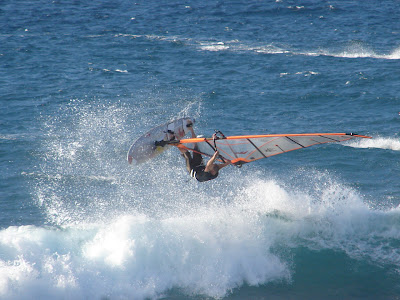 Also because most of the waves would not allow a down the line ride all the way from Middles to the end bowl anyway. It's up to the sailors to judge who can make which sections.
It depends on the day, of course, but sometimes there's three rippable sections at Hookipa: Middles, right in front of the beach and the end bowl. That's three sailors, right there.

That's the other french guy... what's his name? Damn, I must be bad at remembering french names... 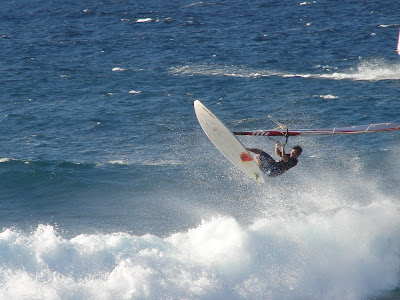 No question that the technical level at Hookipa allows most of the sailors to share a wave and still enjoy a few turns each. Don't like the idea?
Better go somewhere else...
Frustrated because you caught a wave all the way upwind but don't like the section you're on as much as the one forming downwind and you can't get on that because in the meantime other people appeared downwind?
Guess what, that's your fault... learn how to read the wave better (like the good guys do) and position yourself in advance on the best section, even if it's downwind.
At that point, if somebody else will jibe upwind of you, he will have to stick to whatever section he's on, since it's still your wave. And if he doesn't do that and tries to push you downwind, then it's time for a few friendly words.
But honestly, I don't see that happening too much... 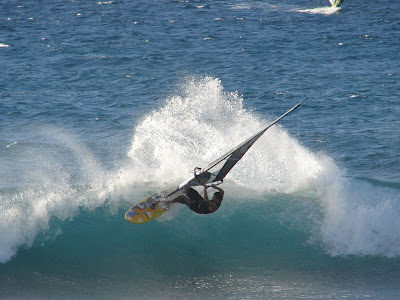 So with this little rant (that ends here) I'm not encouraging the disrespect of the priority rules, of course! I'm just being realistic and trying to suggest other activities (like computer war games...) to people who wake up with the desire to fight... windsurfing is for people who want to have fun.

I love this photo because of the two man canoe that got framed between the guy jumping (I think it's Brad... hey, I remembered his name!) and the two other sailors. 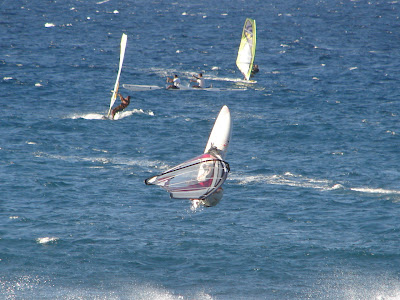 GP's physical performance report (extremely interesting, I'm sure):
After having entered the water at 1, this time I tried the strategy of shorter, more numerous sessions. Didn't really work... every time I had to get up to get in the water again, my body was so stiff that I could barely walk.
Note to myself: next time, stretch in the breaks!
Looked online for arms transplant techniques... could really use a pair of new ones! Even though it's possible, it doesn't seem a good idea. 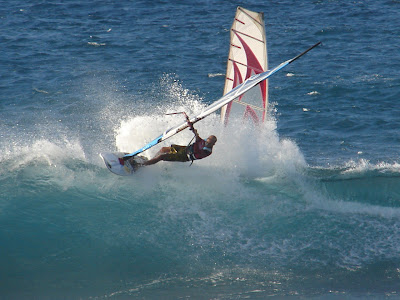 Why am I posting so often lately?
The reason is that Hookipa this week is just the perfect size for my poor skills. It might be boring for the pro sailors (I doubt it, judging from the smiles they all had), but that up to head high-ness just makes me feel like I can try to hit as late as I can, since the consequences of a wipe out (plenty of those for me today) won't be disastrous...
In this transition period (winter appetizer, somebody called it) upcountry is the call. In just a month it's going to be way bigger and I'll sail somewhere else down the coast and have less opportunities to take photos.

Enjoy the posting frenzy till it lasts...
Posted by cammar at Wednesday, September 17, 2008