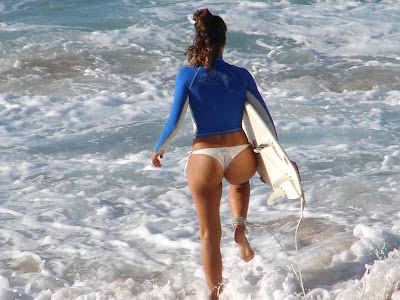 That's what I thought when I saw this girl entering the water at Hookipa... I believe it's the same girl of a couple of posts ago.
Jeesus Christ again!

Where did the bikini go? Swallowed...

Ok, to be fair with the ladies, here's a true Italian stallion. Francisco Porcella looks pretty happy after his session.
Maybe because the girl dropped in on him! 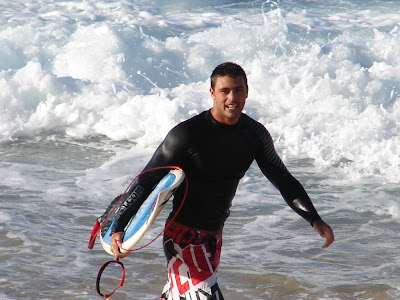 What else we got? Here's Ulli negotiating with nonchalance the shore break at the start of a downwinder. 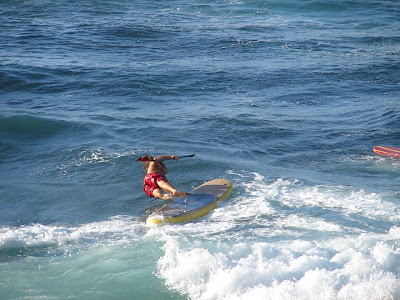 Yesterday the wind was very light and I put The Experiment in the water. Just for the fact that it took me out there and allowed me to sail for two hours (one of which alone at Lanes), I would consider it a success.
The board is extremely slow, it wouldn't plane in flat water even with a 250 HP engine on the tail.
But on the wave it's better than it was before (which honestly wasn't too difficult to achieve...). 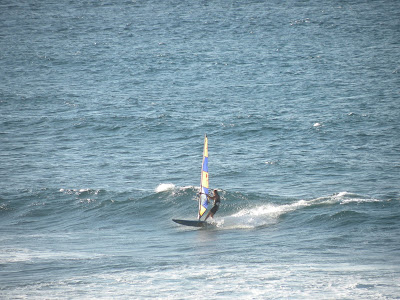 The thing is that having thinned and shortened the board so much, it feels like everything needs to be moved forward. Can't move the fin, but the next try will be with the mast foot all the way forward and without the back footstrap.
I believe that board can be an alternative to the longboard in those very light wind days at Kanaha.

Talking about which, here's an abstract of Uncle Pat's latest forecast:
The north Pacific pattern is showing signs of the season change with an amplifying jet stream loop NNW of Hawaii. On average over the next week, such a equatorward loop to the jet, or trough, should dominate the area for the longitudes from the dateline to Hawaii. This equates to above average surf and below average trade wind speeds relative to summer norms on the north shore.
And in fact, the models for the next few days show a storm forming south of the Aleutians that will kindly deliver a nicely sized NW swell Monday and Tuesday. This time well overhead... guaranteed!
Is it going to be windy? Who cares! As long as there's waves...

And guess what, there are already! NW, N, NE... it's all good. Hookipa today was really fun, and when the wind turned a bit offshore, the waves got really, really good.
Too bad I made my second trip to the rocks of the season (Sept 10... bloddy hell, I'm going for the all time record this year!).
I did quite a bit of damage to the sail, but the funniest thing is that when I got back home and rinsed it off I noticed a little black spot on a panel. 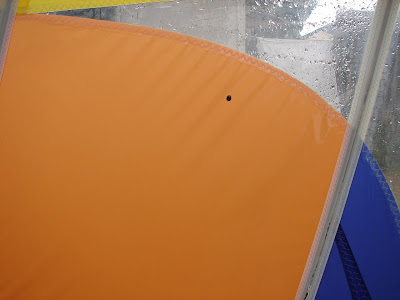 Let's have a closer look...

A limpet!
Hysterical... Not only I went on the rocks, but I must have spent quite some time there!!!

Lastly, my backyard looks like a board repair shop these days... good, it means that I'm in the water a lot! 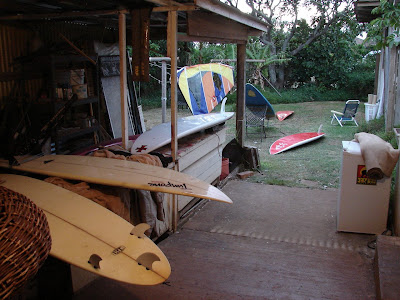 Surfing in the morning, windsurfing in the afternoon, fixing boards for the next sessions in between... what a life!
I don't need material things (other than boards, of course), a fancy car, the latest i-phone, trendy clothes, a successful carrier, expensive restaurants or any other of the bullshit that today's society wants us to believe that are important for us.
(allright, if she really insists, I'll take a date with that girl).
Wake up everyone and start looking inside yourself for what really makes you happy... and this planet is going to be a much better place!

PS. Last minute addition. Walter Scotto sent me a photo of a few italians: me with his beautiful wife and a worldwide (well, at least in Maui and Cape Town) known character known as i Manna. How's my beard? 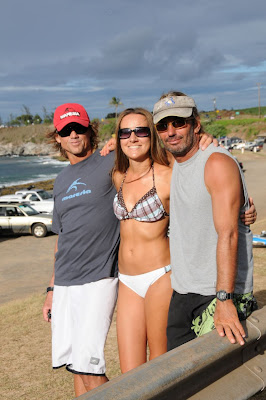 Also, I'm watching the final day of the Trestle ASP surf contest.
The waves are great (super rippable), the level is insane. Just saw an amazing heat between Kelly Slater and Bobby Martinez in the quarter finals (Kelly won).
Now, should I keep watching or should I go surf Hoo and be back for the final (10am hawaii time)?
Mmm... what a dilemma!

10.25 am thursday update. Taj Burrow was leading in the final thanks to two great scores of 9.00 and 9.63. Kelly Slater was combo-ed! But he came up with two waves worth 9.70 and 9.27 and won the greatest money price ever for a surf contest: $75,000, at the same time pretty much sealing his ninth world title having already won 5 out of 7 contests of the season.
That man is amazing...
Posted by cammar at Wednesday, September 10, 2008

I think that is an 'opihi. Don't show the fishermen, they will start demanding windsurfers go away as they are taking all the 'opihi!

She has a lovely face. I'd remember it anywhere!

I always remember a pretty face, I'm terrible with names though.

We saw you at Lanes, thought it was you. Nice waves! See you soon.

Oh My God! Chuncky BUTT nice! She could win a Reef contest for sure! Brazilian? Argentinian?

BTW, thanks for the tip on watching the ASP tour LIVE. Just finished watching the final Slater/Burrow. On a previous heat from Slater, the journalists discussed Kelly total dominance and that he also masters big wave surfing... He won the Eddie, he did Jaws...They mentioned that when he rode jaws he was outsurfed by Laird Hamilton, but it was Slater's first time there, so if he focused on that he would be the best by far... So for the sake of starting a discussion, who is the best surfer of all time, or all least recent time, Kelly or Laird? What do you think GP?
Marcos

looks like you punched a huge hole in your superfreak, how that happened???

GP,
Some of your photos are good, but the first couple here, nearly stopped my heart.

Thanks everyone for the comments.

Marcos, rumors are that she's argentinian, butt I'm nott sure...
Next time I see her, I'll go introduce myself (where exactly, that will depend on my mood at the time...) and find out.

Kelly vs Laird.
Can't compare apples to oranges.
Surfing in contests is a COMPLETELY different thing than free surfing.
Kelly is the undisputed best in the world in contest surfing. On top of being incredibly good at surfing, in fact, he's the best at winning! That means staying calm and confident through the heat, doing the right things under pressure, picking the right waves and having a winning strategy in general.

Laird always hated contests, because they are not what surfing is about (and I agree with him).
Nonetheless, I saw him doing things that nobody else could likely do... like that day he was standup paddling at Lanes with gusts of Kona up to 50 knots...
Let's see if there's any reader that goes back in the archive and finds that post again...

Anon,
did you read the post or you only watched the photos (how can one blame you for that!!!)?
I went on the rocks at Hookipa. The sail took some serious pounding, but after wave number 20 (in the meantime I was happily rock floating... a brand new sport that I'm pretty good at), something sharp cut a panel open.
Those sails are incredibly tought, since they stretch a lot. But they don't like sharp things...

holy gluteus maximus! roman lord of the twin half moons!!, the best i have seen, however that being said a closer inspection of course would be needed.