I surfed Hookipa early and late yesterday and the difference in size was substantial.

If that's the trend, and it is, today it might be very close to flat. "Small days ahead" I said commentating the wind map of a  few days ago, and here they are.
Trades are making their come back this week and with the lack of waves, I see myself getting desperate enough to do some downwinders on my standup. Which is why I post this photo of Dave Kalama and his wise words of advice of how to improve the reach of your stroke.

I love the way he mentions conscious and unconscious levels. When you're engaged in the strong paddling to catch a windswell bump, you're most definitely not thinking. Just like when you're paddling for a wave and then riding it on a surfboard. And that's one of the reasons why any sport/activity that will even just temporarily kill the annoying presence of our thoughts is so attractive to humans. We're not as lucky as the other animal species on Earth. We were born with a background noise incorporated in our brains. Sorry, I'm reading a book from Ekhart Tolle, can you tell?

"Reach dammit reach" used to be something I would repeat over and over when I worked with people on there stroke. Mainly because that is the best way to incorporate all the larger muscles into the stroke. Now I yell "slow down " more than anything. Because if you want to change something, the best way to do that is on a conscious level. If you paddle at your normal rate, your conscious mind cannot... coordinate all the movements necessary, by default your subconscious takes over and it's easy. If you want to change something, first you have to do it on a conscious level, which means you have to slow way down. Basically, learn to walk before you run. So next time you want to work on your stroke, " slow down!!" 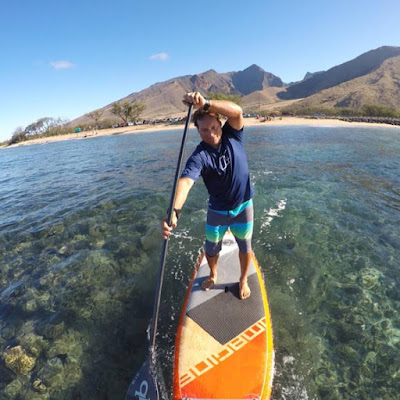 Bit depressing lack of energy at all buoys which is reflected by the webcams. I probably got the set of the day on the Lahaina one on the right, check it out yourself before going, it's pretty slow. South shore will get a bit more size starting Tuesday. Nothing to get too excited about, though.

Yesterday's MC2km map I posted was not up to date as I thought. Here's the new situation: the top right time stamp is not updated, but the hours of the day that you select below the map are. But the maps are not updated, so until they fix it and we see a new time stamp on the top, they're useless.
I don't get it. How can a process that should be automatically carried out by a bunch of software programs fail so often? That's why I make fun of it, claiming there's a County employee called Woody that does it manually. Well, apparently Woody is in vacation. He must have gone to a meteorology convention together with Pat Caldwell, also missing in action.

Here's the Windity HRW 3km model graphical representation of the wind at noon. Nice and easterly, it should make for groomed conditions for the morning. Oh, I already forgot that there's no waves... 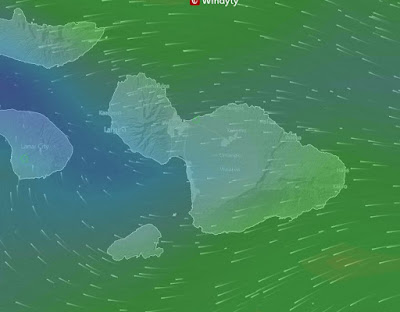 Wind map is encouraging: a medium size NW fetch, not too far and shooting nicely at us. The Surfline forecast doesn't really reflect this swell, I don't  know what's going on. For me, that's at least head high waves in 2-3 days. We'll see. 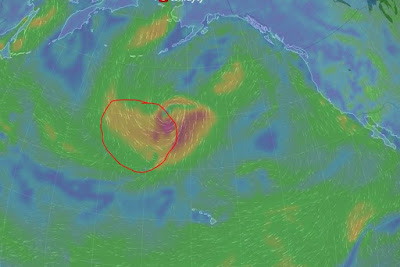 Not much down south, mostly Tasman sea stuff that will light up Cloudbreak and barely make it over here... 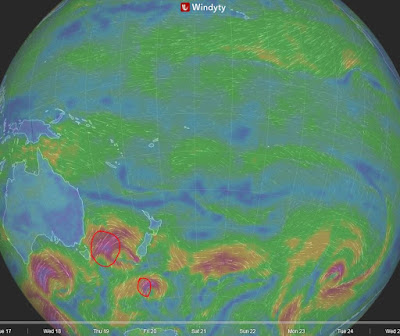