Yesterday I surfed a windy Hookipa in the morning just to try the new front foot pad (excellent and in the perfect spot) and later I did a bit of windsurfing. Both were moderately fun, with waves up to chest high. The photo below by Jimmie Hepp shows a much bigger than average wave later in the day. In the end, the energy from that close NW fetch from a couple of days ago did materialize. 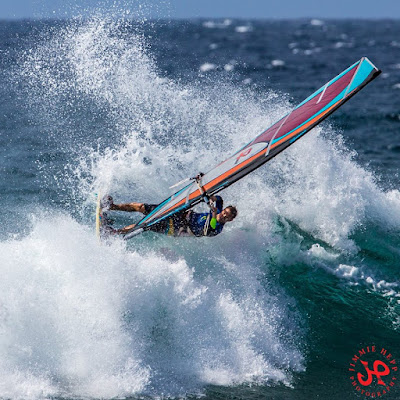 1.2ft @ 16s from 172° (S)
Mostly windswell at the Pauwela buoy, with a hint of leftover energy from the north at 10s. Windy from the early morning, I'm calling for poor surfing conditions at Hookipa all day. Windsurfers will be happier than surfers, but for my high standards, it's gonna be average conditions for that too.

Shall we drive to the Lahaina side then? Let's have a look.
Yesterday I saved the graph of the Samoa buoy. Time stamp is all screwed up (you have to subtract 10 hours, according to my observations), but we can still have a look a what happened like three days ago (in the red circle) to have an idea of what we have in the water today. Not much to be excited about, as the longest periods seem to be around 13s. Period goes up with travelling while size goes down, that's why we have that 16s reading at Barbers. Lanai had one too at 2am: 0.6ft @ 16s from 188° (S), then it disappeared at 3am, but there is a tiny bit of 16s energy in the water. Once again, nothing to be too excited about, seen the very modest size.
For this morning, Surfline was calling for 2.2f 16s, but unfortunately, that was a very optimistic forecast and it's not happening.

The period will go up a bit in a couple of days, I put an arrow on the swell (around 3f) registered yesterday and underlined the 15-16s periods. As a matter of fact, the NOAA is posting that a moderate south swell is expected late Wednesday through Friday. 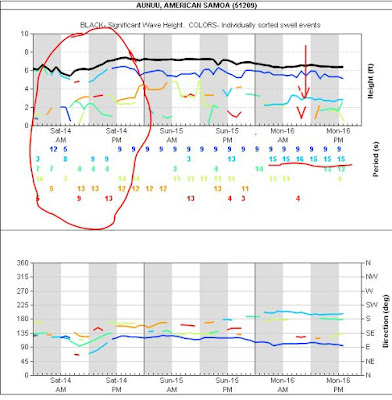 And to finally address the question to whether to drive to the west side or not, the 5.30am snap of the webcam (Lahaina on the right) is telling us not to: it's tiny and not even glassy, since the strong trade flow screws up the wind on that side too. Hookipa looks pretty flat, might be a good day to take a rest.
I'll measure the hell out of my favorite surfboard and put the measurements into the Shape3D software so that in tonight's day 2 of the Surfboard Shaping Workshop I'll have something to work on...

Wind. Of course, as soon as I say that the NAM3km model is often exaggerated, it happens to be right, as yesterday's wind graph of Hookipa shows: gusts well in the 30's.

So we're gonna trust it today and call for a very windy day. 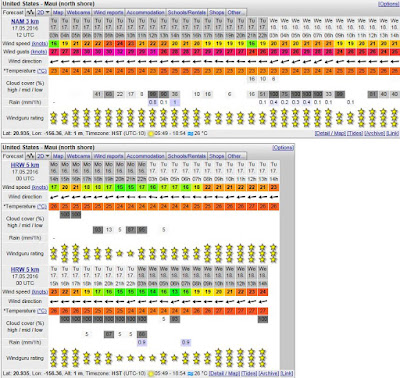 This is the same model in the windity graphical representation. I wish the wind on the west side would be as light as it shows, but I know it won't. At least in the thousand peaks area. MC2km is the best model for the local wind in Maui, but unfortunately we all know how often it doesn't get updated. That's the case also in these days, with the maps stuck to May 11th. 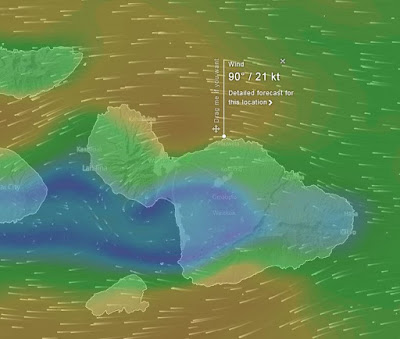 Wind map shows a tiny N fetch all the way up in the gulf of Alaska (won't do much) and a windswell fetch, now oriented in a way that will generate a bit more energy for the north shore compared to a straight east one. 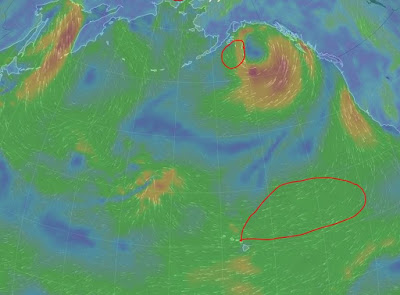 South Pacific offers a couple of decent fetches: a Tasman sea one and another one east of New Zealand. Might be worth to make a mental not that in 7-8 days there might be waves on the south shore (but if you don't, this blog will remind you).
At the moment, Surfline is liking the tasman sea fetch better and is calling for 1.8f 20s from 213 at 8pm of Wednesday. That is what they think we should received out of a major swell that will hit Fiji on Monday: 16.8f 16s from 206: 15f less and 4s more. That huge decay in size is not only due to the travel in this case, but also to the shadowing effect of all the polinesian archipelago the swell will have to weave its way through. I'd happily trade 1s with 4f... 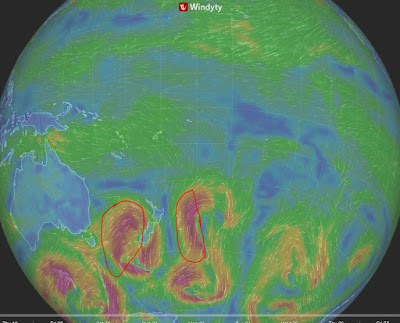 The reason the buoy timestamp is +10 hours is they are showing the time in GMT (UTC). They just need to adjust for HI TZ, a very simple fix. You already emailed them I assume. I can do the same.