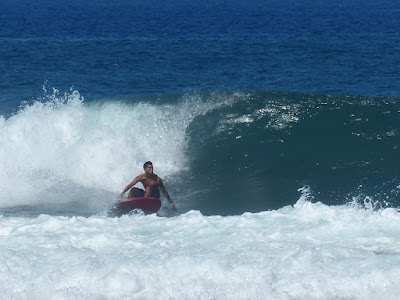 This guy demolished this wave with several bottom to top turn combos like this. 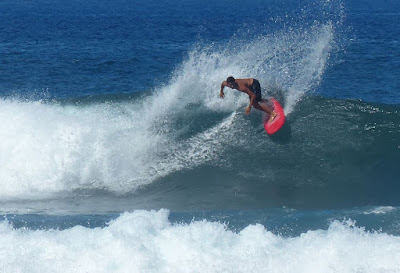 Once again we have big numbers at the buoys and that will reflect in big waves in the water. How's this well overhead Impossibles looking set at upper Breakwall? Check out the webcam yourself before going. 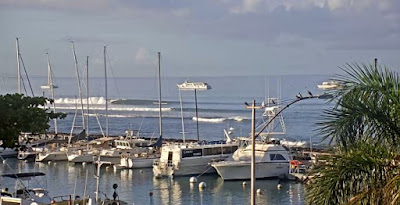 And for a change (for the season), big numbers also at the NW facing buoys (Waimea is down). The local low that is disrupting the flow of the trades is also delivering a nice present for the north shore lovers/lazy drivers. Two fairly different directions, without local buoys now is going to be difficult to predict Honolua. All I can say is that if that energy at the NW buoy really is from 330, there might be waves also up there.

Below is Hanalei's graph that shows a sharp rise (from 3 to 9 feet) from 6pm yesterday to 6am today. From the post Buoys to Maui travel times and Maui's shadow lines we learn that at that period it takes 10-11 hours for the energy to get to Maui, so we should see a similarly sharp rise throughout all day. There's already solid head high waves at Hookipa (that's what they look like on the webcam) and it should get well overhead later in the day. Not sure we'll reach the same 9ft mark though, for the following for two reasons:
1) they get smaller with the extra travel
2) the main energy is missing us to the west, so the most western islands will get more energy than us. 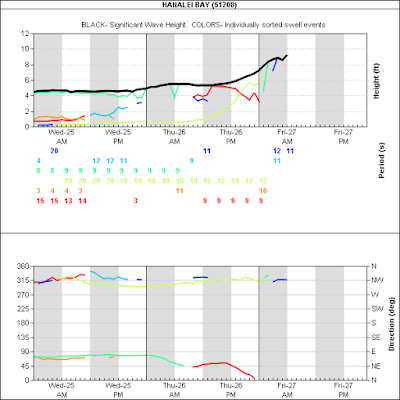 North Pacific has a distant NW fetch, a closeby one and a NE fetch.

South Pacific has a a couple of relatively weak fetches. The one circled in yellow would be stronger, but no idea if it's oriented towards us or not down there. Probably not. 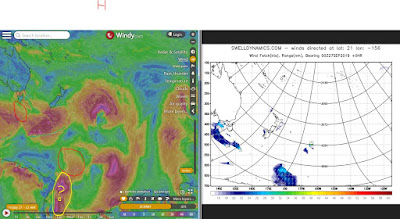 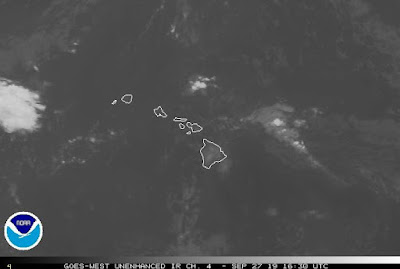