I'm back and so are the calls. I will do a post about the surfing part of my trip soon. In the meantime, here's a shot a photog took of one of the waves I caught on the first day I arrived in my favorite spot in Indo: welcome back! 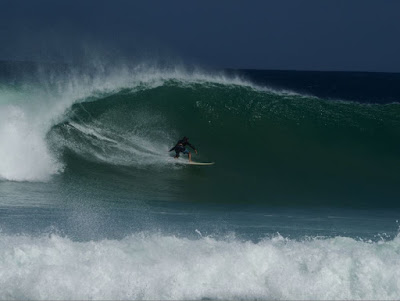 Very good numbers at the local south facing buoys. No idea where it's coming from, since I've not been spotting/saving fetches on the maps. This condition will last for the next week, as I'll start building the new database of maps today. Fortunately we have Pat Caldwell that illuminates us:

This event is expected to be filled in by Saturday as it peaks near to a notch above average from 180-200 degrees. It should slowly drop on Sunday as a new event fills in.
A compact gale east of New Zealand 9/17 had the head of the fetch about 2800 nm away, much closer than normal for sources in the southern hemisphere. This short-lived source had a direct aim at Hawaii. This event is expected to build locally Sunday 9/22 in the afternoon from 180-190 degrees, peak Sunday night just above average, and drop on Monday.

As a result of that, Lahaina has pretty good waves this morning. That's another nice welcome back, fortunately not as intense as the Indo one. The webcam shows some head high sets, check it yourself before going, as the onshore flow will start anytime soon. 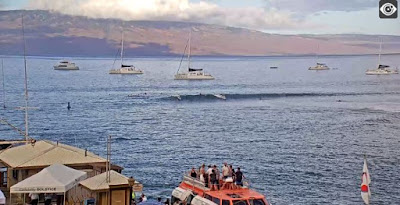 First two buoys show a smidget of a WNW swell that won't make for anything worth mentioning at Hookipa. Windswell at Mokapu is pretty short period, but from 56, so this might create some small and weak breakers.

North Pacific has (clockwise):
- a tiny W fetch associated with a storm south of Korea
- a moderate NW fetch that might grace us with a couple of feet of average period in a few days
- the extended windswell fetch that includes a little hurricane that I believe has been named Lorena
- a tiny E fetch belonging to another hurricane forming south of Baja

South Pacific has a nicely positioned S fetch just NE of New Zealand and a much smaller/weaker SSE one. Surfline calls for a4ft 14s from the first one a week from today. 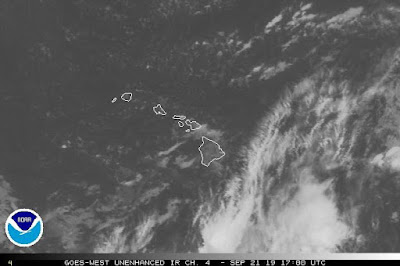