It was another great day of fun waves on the south shore, this is Pete Cabrinha enjoying a rather lovely Ukumehame. 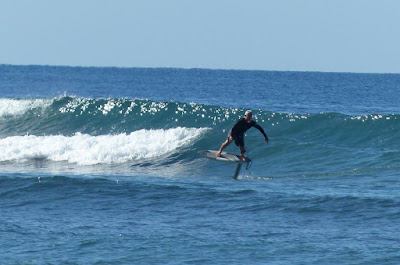 There's still waves from the SSE and that's very perplexing, as my fetches maps don't justify them. Here's what Pat Caldwell says:
A mid latitude low pressure to storm force south of 50S within 100-120W moved slowly E 3/23-25. It had fetch aimed directly at Hawaii, which is unusual for lows in that area to establish such long, wide fetches of sufficient duration to generate swell for Hawaii. A much weaker subtropical low formed S to SE of the Tuamotu Islands 3/26-27, adding shorter-period swell from a similar direction of 145-160 degrees to the aforementioned source.

Below is the map of the 27th, the only one where the Tuamotu fetch deserved a red circle. But that's 8 days ago and the travel time from there is only around 5 days.

Whatever the source is, there's still waves. Check the Lahaina webcam if interested, for size, conditions and consistency. 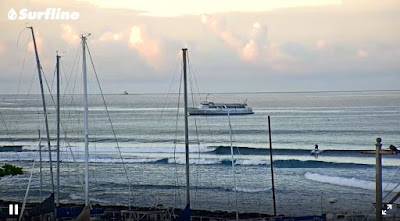 Still a bit of windswell at Pauwela, better enjoyable at eastern exposures.

North Pacific fetches map (about 4 days travel time from the NW corner):
The low to our NW today is only aiming winds to our west. The remote NW fetch is better oriented and there's still an offshore E windswell as well.

Love your blog, been following it religiously for a few months now.

The fetch in the South Pacific you posted today is moderately sized, but I predict that we'll see some good sized waves from it. The high that's right to the west of the low means there's likely a drastic difference in atmostpheric pressures-- resulting in longer, sustained winds. Let's see in a few days if we might be pleasantly surprised by larger-than-anticipated waves.