A delightful nose riding session was what I did yesterday, before lucking into a really good day for wind foiling. I promised a little write-up about my experience so far and here you find it below, but first a photo showing the sunset conditions at Pavillions by Jason Hall. 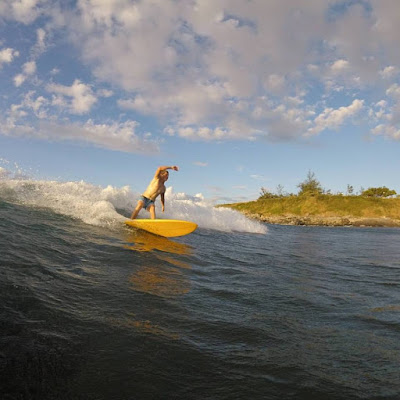 One of the fun aspects of windfoiling (at least at this stage) is that there is a lot to figure out by yourself. Obviously, a lot of your experience will depend on the foil. I own a GoFoil Kai model, which is designed by Maui windsurfing legend Alex Aguera, who in the past years first switched to kiting and then got into foil designs. The Kai is a foil for surfing, not for windsurfing. That means that it has a fat profile that makes it foil at slower speed than a proper windsurfing foil, but it won't handle high speeds as well as a faster foil. Another important aspect of foils (specially when learning) is stability. That depends on a bunch of factors, all interacting with each other, like: width of the wings, lenght of the fusolage, lenght of the mast, position of the box on the board and wing profile too of course. I'm not gonna get into all that because I don't have the knowledge, but I did experiment a bit with different box positions, so here's what I found out. 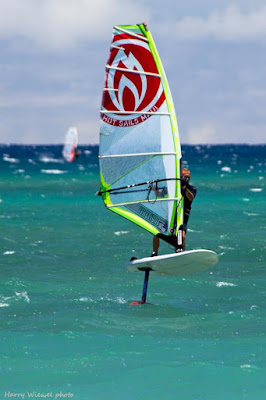 The board I'm borrowing (Starboard Isonic 125) has a rear and a front box. In the rear position (which is the position where a regular windsurf board normally has the fin), the foil needs a higher speed to come out and stay out, but it's more directionally stable. In the front position, the foil comes up much more easily and it's also more maneuverable. I personally have no doubt in preferring the front box.

While half-foiling on the rear box (most board out of the board, but with the tail still touching the water), in fact, the stance I had on the board and overall feeling were very similar to a regular windsurfing slalom board. It just felt like I had a big fin generating a lot of lift. And even when completely foiling, it felt a bit like slalom sailing. Call it slalom foiling if you will, but the feeling wasn't as engaging as the one provided by the front box. 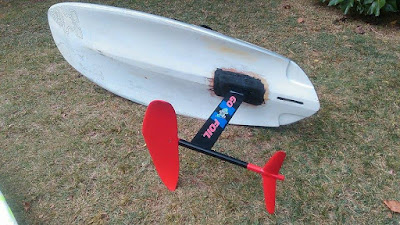 As I said, the front box allows you to foil at a much slower speed. That is great for very light wind days, which is when I plan to do most of my windfoiling. Once the  foil is completely out of the water, the feeling and body stance have very little to do with the regular windsurfing ones. You just want to stand upright, weight in the middle of the board, and sheet out the sail. Once at foiling speed, in fact, the foil seems to almost propel itself without the need of extra lift provided by the sail.

The game at that point is to keep it leveled at the right height, by adjusting the power in the sail at something I estimate like 10-20% of what you would get if you were leaning back and sheeting in as usual. That's why it's good to have a sail at least a couple of square meters smaller than the other windsurfers. Here's a sentence from Robby Naish that will make you understand how foiling is for light wind mostly: "as soon as the regular windsurfers are planing, it's too much wind for the foil". 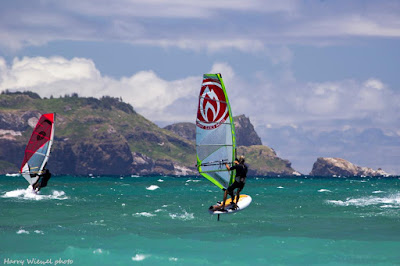 I'm sure there are or there will be high speed foil designs, but you definitely want to start with a slow one. Now, the reason while I got into windfoiling with a surfing foil is that I tried SUP surf foiling on small waves first and that was so difficult/dangerous, that I felt like exploring alternatives. My SUP board, in fact, has a mast track and it can be sailed. But in this case, the rear end of the foil box is at 20 inches from the tail, while the Starboard's added one is at 16, so you can imagine how squirrely my SUP it was. The Starboard is overall much better for the following list of reasons:
- the (added) rear end of the box is at 16 inches (more stable than 20)
- it's lighter
- it's designed to plane in light wind and that of course helps getting to the foiling speed. Not being a windsurf board, my SUP sails horrible  in flat water (but it's fun on the waves)
- it has a wide nose with plenty rocker and relatively soft rails, so it handles the numerous nose touch downs nicely
- it has properly placed (custom) front footstraps

I did manage to get a relatively cool shot from underneath my SUP though, and here it is. That's from the tail towards the nose while sailing back to the beach. 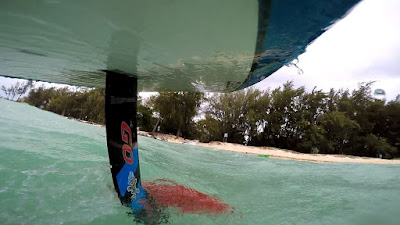 If you know how to windsurf already, learning how to windfoil will be much easier/safer than learning how to surf foil. You just have more control in the wipeouts and less wipeouts overall, since the sail's attachment to the board provides a stabilizing effect and hanging on the boom provides a good deal of balancing help. My plan is to become proficient at wind foiling before going back to attempt SUP surf foiling.

How much easier that will be at that point, I have no idea. It might not be easier at all, or it might be even more difficult, since at that point I will be used to having a sail in my hands. For sure, when the time will come, I'll let you know on this blog, but it might be a while since I'll also stick to my guideline that if the waves are good, I'd rather be (regular) surfing.

In the meantime, the windfoiling added a new dimension to the activities I can have fun with in the water. Too bad Maui is so windy and the 10 knots days are rare. But they are common in the rest of the world, and that's why I predict a brilliant future for this variation of windsurfing. We'll see.

Here's a fresh off the oven video by Robby Naish explaining light wind foiling while doing it.


Another very good website for novices is the foil-academy by Slighshot. I haven't completed all the steps yet, but it seems very well done. Of course you can find a lot of other material on youtube, I only feel like adding that wind foiling is totally exhausting. You don't really use the harness (at least when learning) and that tires your arms and shoulder. And once the foil is up, it requires a lot of focus and attention to keep it up and in control. Definitely I'm not thinking about my "problems" (also because I don't have any!) while I'm up there. Which is also one of the reason why I love surfing so much. No distractions induced by our never stopping train of mind made thoughts, just focus on how to deal with the situation. It's like meditation, but more fun.

Minimal energy from the south, but still something to play with if you have the right board. Check the webcams.

Windswell still up and from a direction that does not get blocked, Hookipa will have waves also today. I won't see it in the morning, because I much prefer to chase knee high clean peelers on the other side. Hookipa wind sensor reading 10(6-13)mph from 77 at 4.30am. 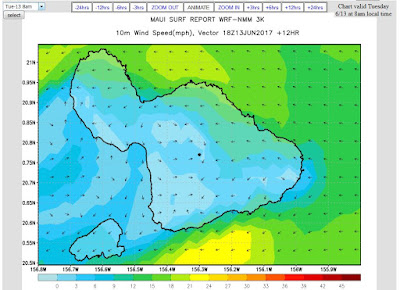 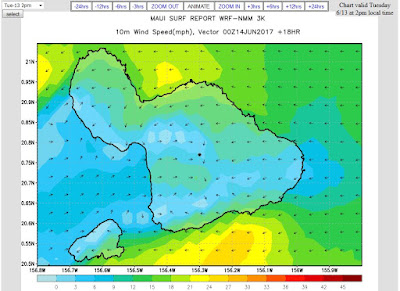 North Pacific fetch map shows a bit of a NW and the windswell fetches. We'll see how tomorrow the first one looks. I don't see any swell on the Surfline forecast yet, but I do see 3f 11s predicted for Monday. Might be the evolution of that fetch or another one, we'll find out the next few days.

South Pacific shows that the two good fetches we saw yesterday moved quite a bit (not the best thing for wave generation) and the one I pointed out with the red arrow now in a position across New Zealand. As soon as it will to the east of it, it will start generating waves for us, let's hope it doesn't move too fast. We'll find out tomorrow.

Next time I announce another stunning day, I better check the rain forecast first... yesterday it wasn't exactly stunning, but in the end, rain or shine, every day is Maui is stunning! So here we go, another one on its way! 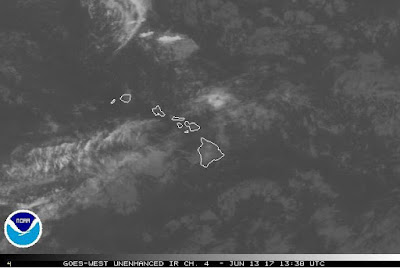 GP,you didn't explain how you got that pic of the underside of your board. Curious.

I used the fcs gopro mount in one of the side fin boxes. The drag was so bad, it was really hard to make the foil come up... but I got the shot!

Nice article man, I want to get into foiling here on Aruba, you gave alot of insight on starting out and what to expect