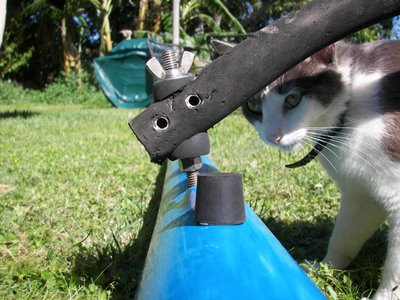 If Ace hardware in Kahului doesn't have something, it pretty much means that that something doesn't exists. So I had to build my own 45 degrees inclined washers out of that rubber thing you see sitting in the front on the ama. Behind, the result.. a cut and a hole later. I think it's pretty good, but Micio expressed some doubts about the durability of it. I better be concerned about that, because, as you guys should know by now... he's quite technical to be a cat!
Posted by cammar at Friday, April 14, 2006

Having just awoken from his cat-nap, Micio is cat-ching up on the latest canoe repair techniques.

Or maybe he just smells the duck....

He smells the duck? ...
Oh, you mean Donald! No, Donald lives in Makawao, Micio lives in Kuau. They're good friends! Sometimes they meet at Charley's in Paia for a beer, but only on Saturdays when there's a lot of chicks and pussycats...