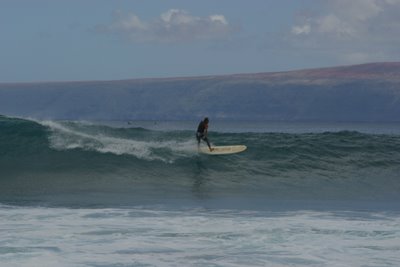 The original idea for this blog was to post frequent forecasts/reports of the surf/windsurf conditions in Maui. Soon I figured it was too much commitment, so it naturaly evolved into a photo log. Tonight I have 10 minutes and here are both a report and a forecast.
Report. Today two new swells arrived on the north shore. One from WNW (7 feet at the NW buoy) and one from ENE (5 feet). The wind was light, so I sailed lower Kanaha on my 12.6. The mix of swells made the arrival of the waves very, very consistent. The combination of the last two factors allowed me to catch about a million waves. I went mostly left, upwind towards the channel. Walks to the nose, jumps on the back of the sail to ride goofy stance, big snaps backside regular stance... everything! Then tack just before the wave died or closed out, sail towards the outside, see the set, pick the wave, pivot jibe and down we go again. I almost gotty dizzy for all those circles... soo much fun!
Forecast. The current swells will hold tomorrow morning and start to gradually lower (actually the ENE one is lowering already, hence expect less frequent big sets) thru friday. Not too bad, since Saturday morning a new WNW swell will arrive. Shortly followed by a similar one on Monday. Both are going to be very west (Pat Caldwell says 190-310 degrees) and whatever is left after the shadowing of Kauai and Oahu will try to wrap around the West Maui mountain to hit Maui's north shore. Not the best for Kanaha. Better up the coast towards Hookipa.
The trade winds will be a bit too strong for my tastes. It's OK, I'll sail the shortboard.
The south shore will be quite for a while. Maybe a small Tasman swell around April 14-15.
I didn't want to disappoint the photo lovers, so here's one of me surfing La Perouse on 7-17-2004 (the island on the background is Kahoolawe, responsible for blocking most of the south swells). A friend photographer happened to be sitting on the rocks and took a bunch of photos. He was more photographer than friend, so I had to pay for them.
You lucky bastards can enjoy them for free...
Posted by cammar at Wednesday, April 05, 2006