Flat spell is over.

I didn't waste time anyway, since yesterday I spent 5 hours on the bike to explore the west coast and find possible surf spots based on:
- geographical coordinates provided by wonnasurf.com
- shape of the coast line
- presence of rivers.
Got to love the google maps app on the smart phones these day. You put a little star on the map when you find a good spot and the day after you can find it again no problem. Well, most times at least.

This morning I surfed the river mouth I posted in real time (Bali is 18 hours ahead of Maui, or 6 hours behind if you like that better) and that was surprisingly fun. Until the crowd went from 2 people at 6am to 15 at 7am. It's really crowded here.

That's why I chose to venture to one of those spots I mention above for the second session.
The setup looked intriguing also because of a nearby temple. 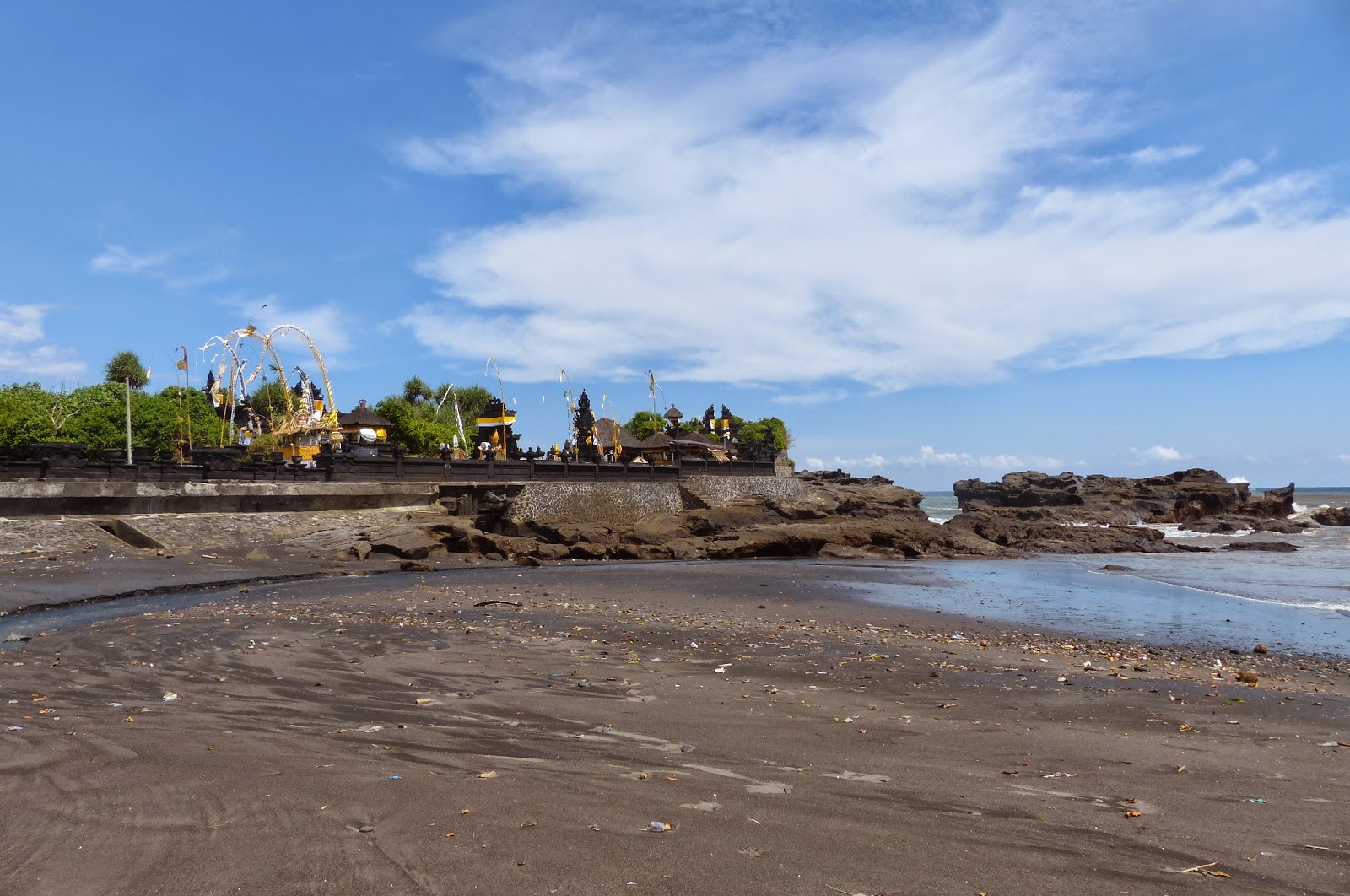 The most attractive thing though was the lack of other surfers.
The least attractive was the color of the water. Yesterday the afternoon rain was quite intense. Nonetheless, despite being far from perfect, the shape and size of the wave looked fun enough for me to challenge it. 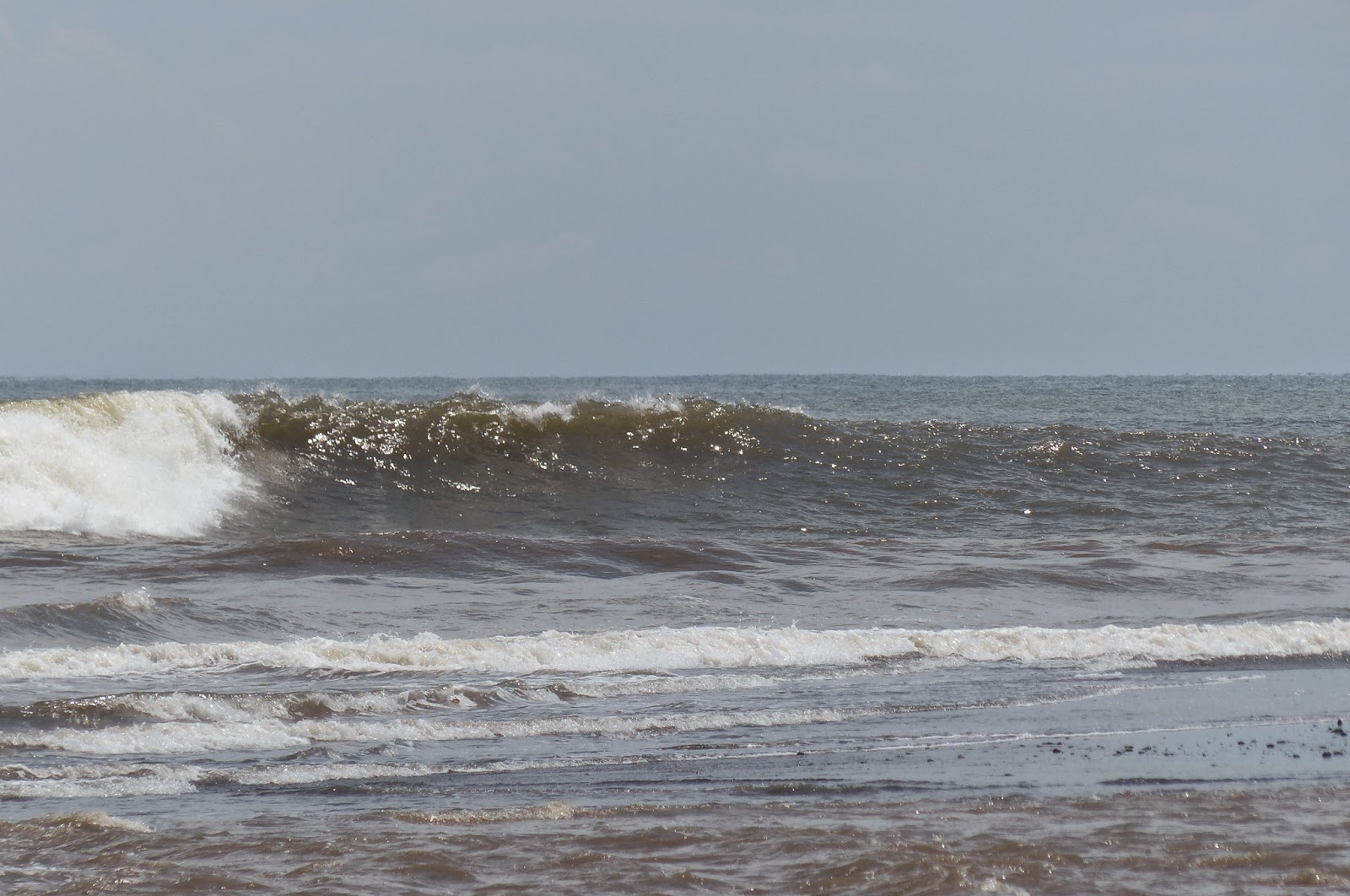 To get to the wave I had to paddle across this river. The current was pretty strong and I landed at least 30 meters down stream of where I launched. Lots of water moving. That gave an extra kick to the adventure feel of the whole thing. 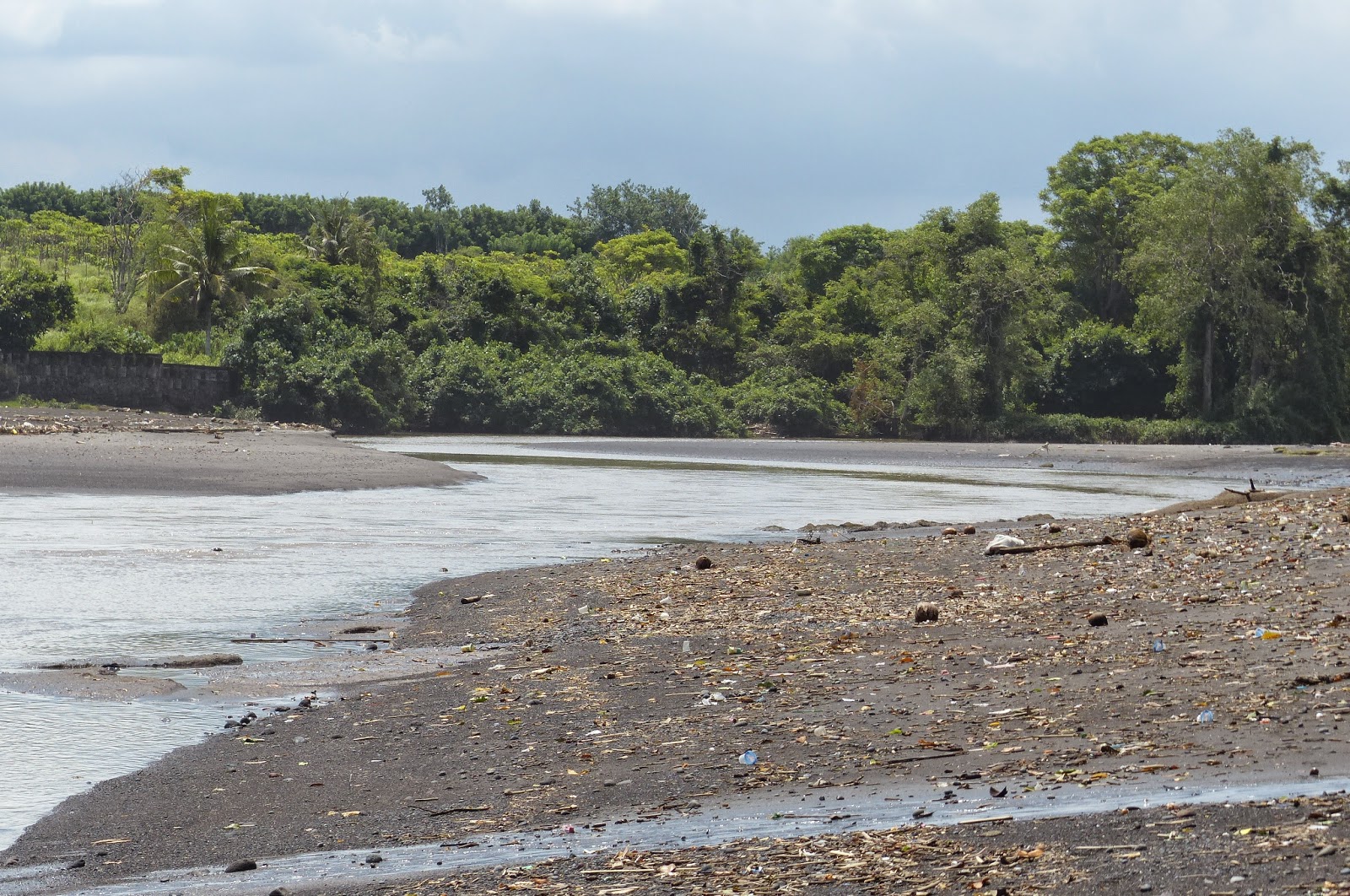 The wave had two peaks and I prudently started from the one down the line. Caught a bunch of fun ones there and it seemed that the deeper one wasn't makeable. But I was so proud of myself for doing a thing that the majority of the people I know would have not done (surf alone an unknown murky water spot) that my over inflated ego pushed me to paddle to it.

While I was sitting and waiting for the right shape one, I heard a big splash behind me. I turned immediately, but all I saw was the boil left by whatever it was that made the splash.
I went from "look how brave I am" to paddling like a madman for the shore in half a second. Quite a humbling feeling that made me laugh at myself a lot.


Then I saw this on the beach. 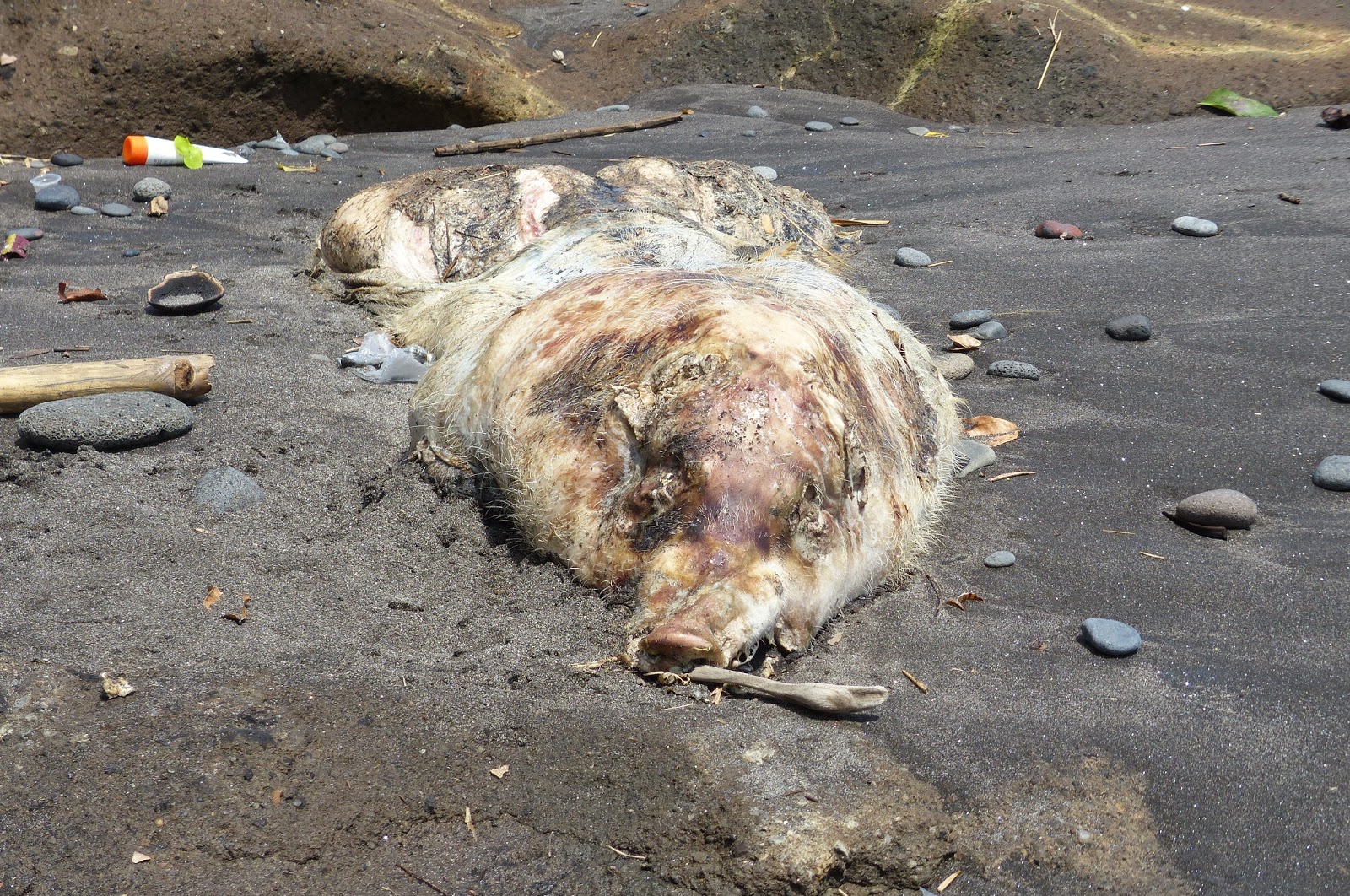 And then I saw this. 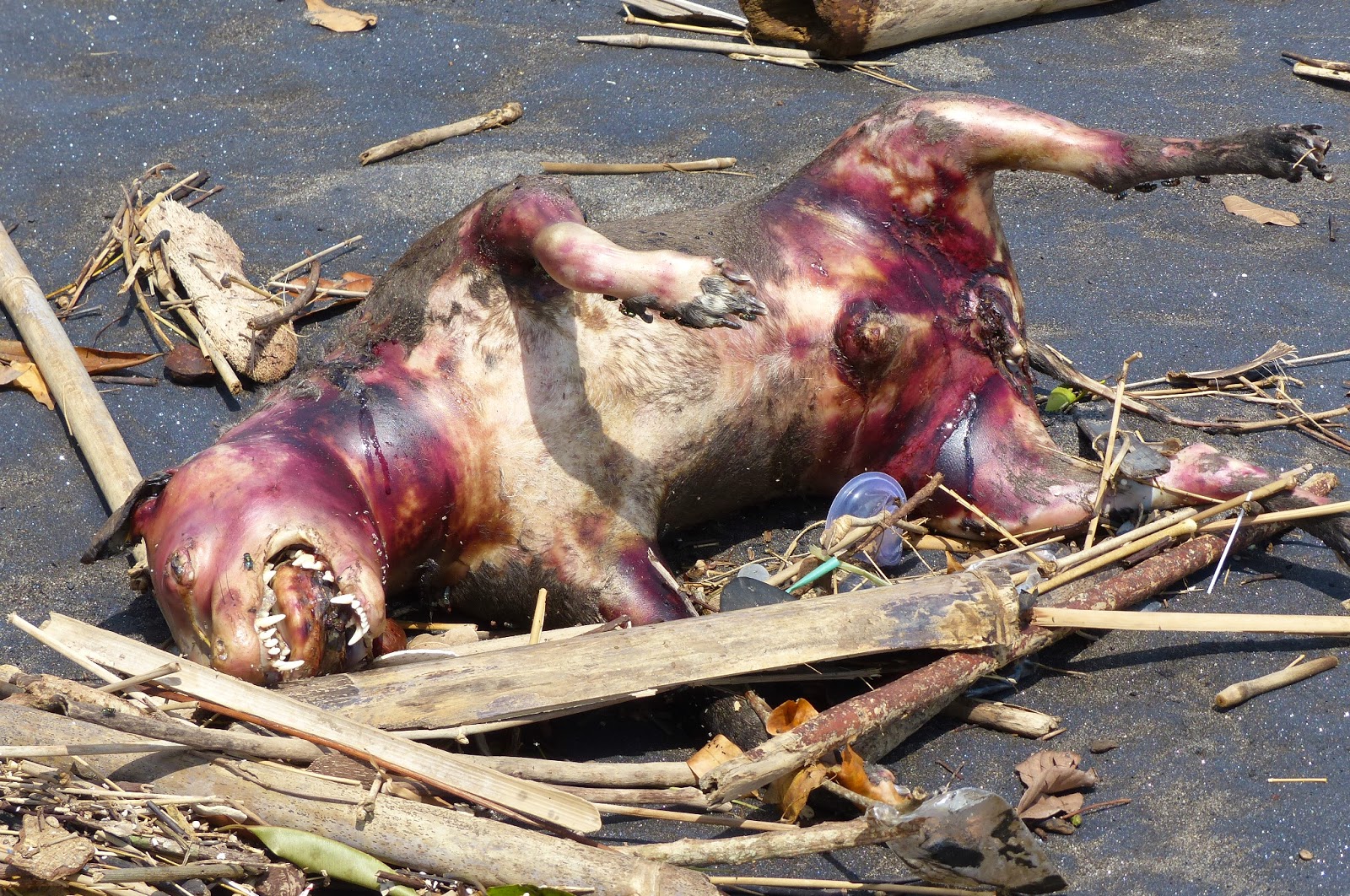 Neither of the cadavers smelled, so I assume they died in a flush flood yesterday.
Yeah, maybe surfing a murky river mouth the day after a big rain was not the best idea after all. I don't think I'll do it again.

As you will see from the forecast later in the post, there's no much wind these days and that allows for multiple sessions at any time of the day even on the west coast (that normally gets blown out by the trade winds by 10am). Sunset session (photo below) was at another river mouth. This time no cadavers in sight, but plenty other surfers well alive and kicking. 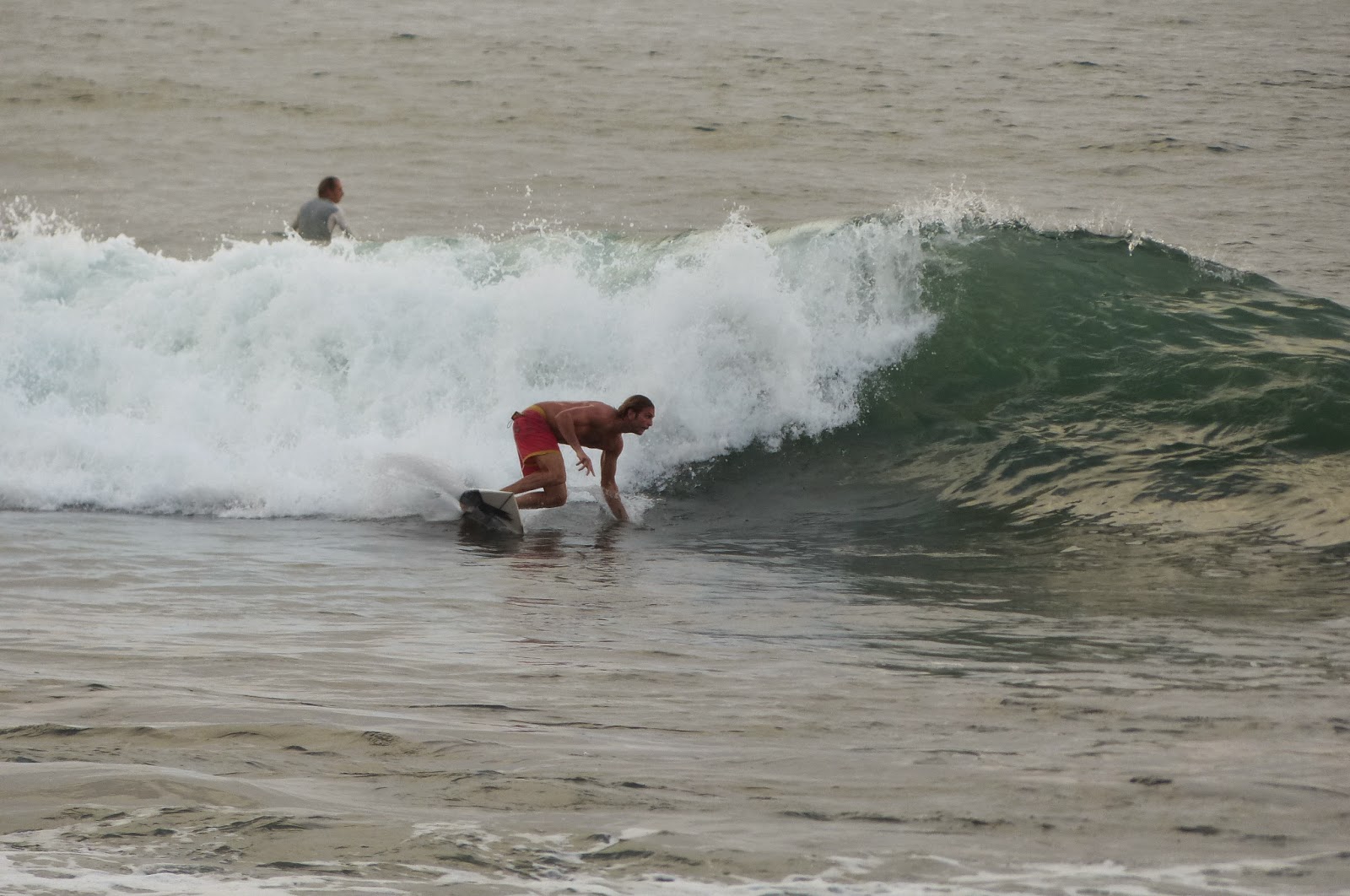 Some nice duck dives too. 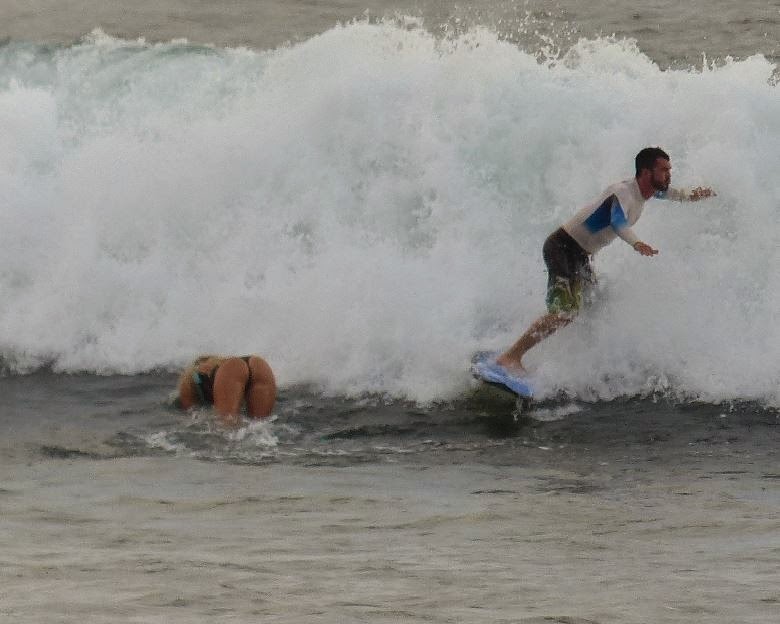 Forecast, I was saying.
I'm staying in the Canggu area and even though the waves are not as high quality as the Bukit, I don't feel like driving over there (1h) because there's no wind. What makes the Bukit waves so high quality, in addition to the shallow reef bottom, is also the offshore wind.
I'll wait until it will start blowing and that will happen soon, as the windguru graph shows below. Don't look at the waves, because the numbers seem to be randomly generated by a 3 year old, really. 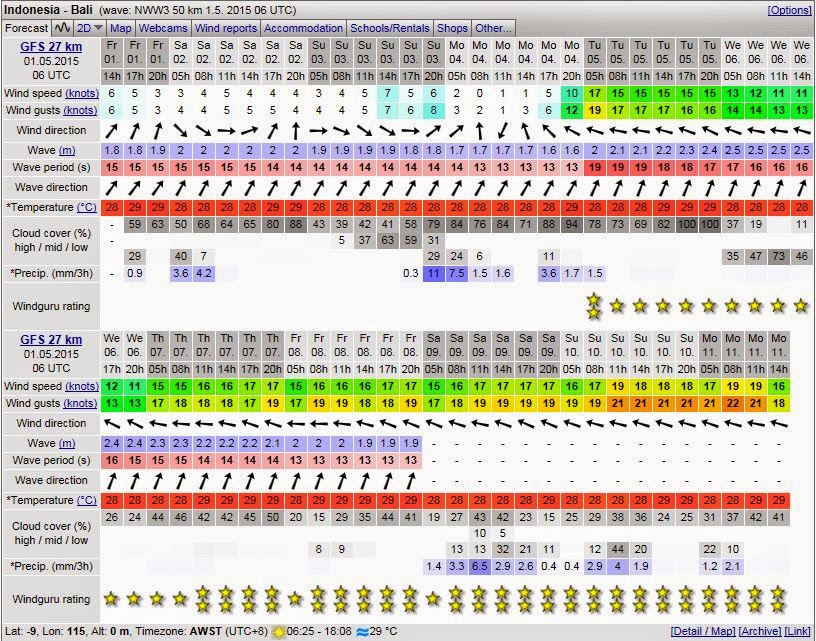 Surfline is proving once again to be very accurate instead. Plus I find their graphic representation the best possible one. Here in Indo there's no buoys, so you can't really check what's in the water, but from what I observed so far, they have been totally spot on each single day.

As you can see, Wednesday it's gonna be pretty freaking big. I'm thinking Medewi (never been there) and later in the week Impossibles at mid/high tide. Suggestions welcome in the comments if you're a Bali expert. 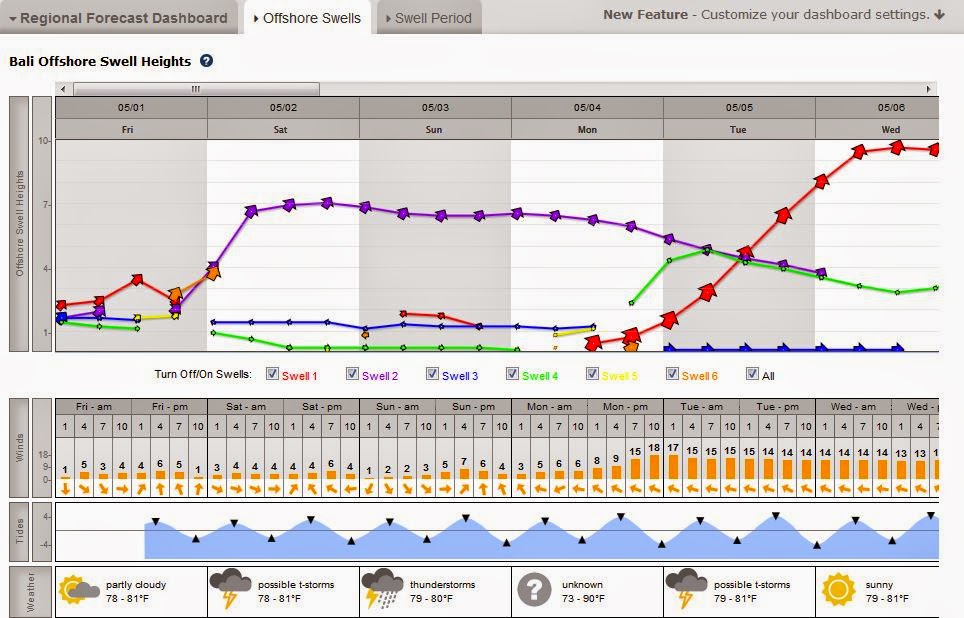 This trip I have a high speed internet connection, so I can actually compare the forecasts of Surfline (heavy pages to download) and Magicseaweed, the latter being a lot less accurate.
One thing I like on it though, are the wind, swell and period graphs. Below is the period one. It shows the different arrival times of the different periods for that big swell. 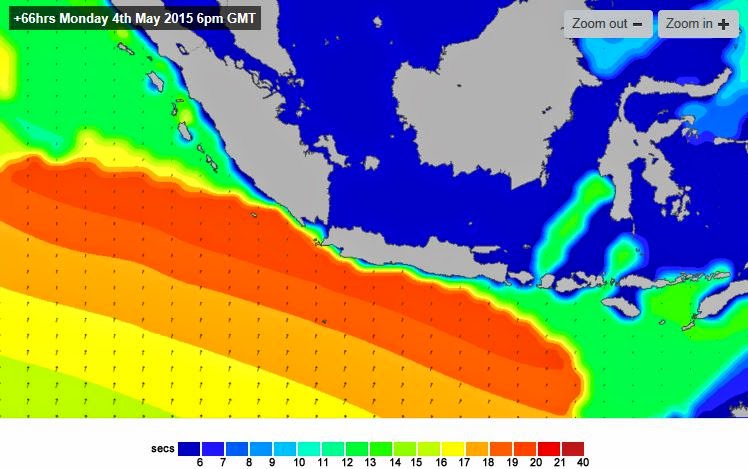 Another thing I'm loving about this trip is having a kitchen. This photo is dedicated to my friend Maurizio who taught me a simple trick to make the broccoli sauce creamier. It worked beautifully. 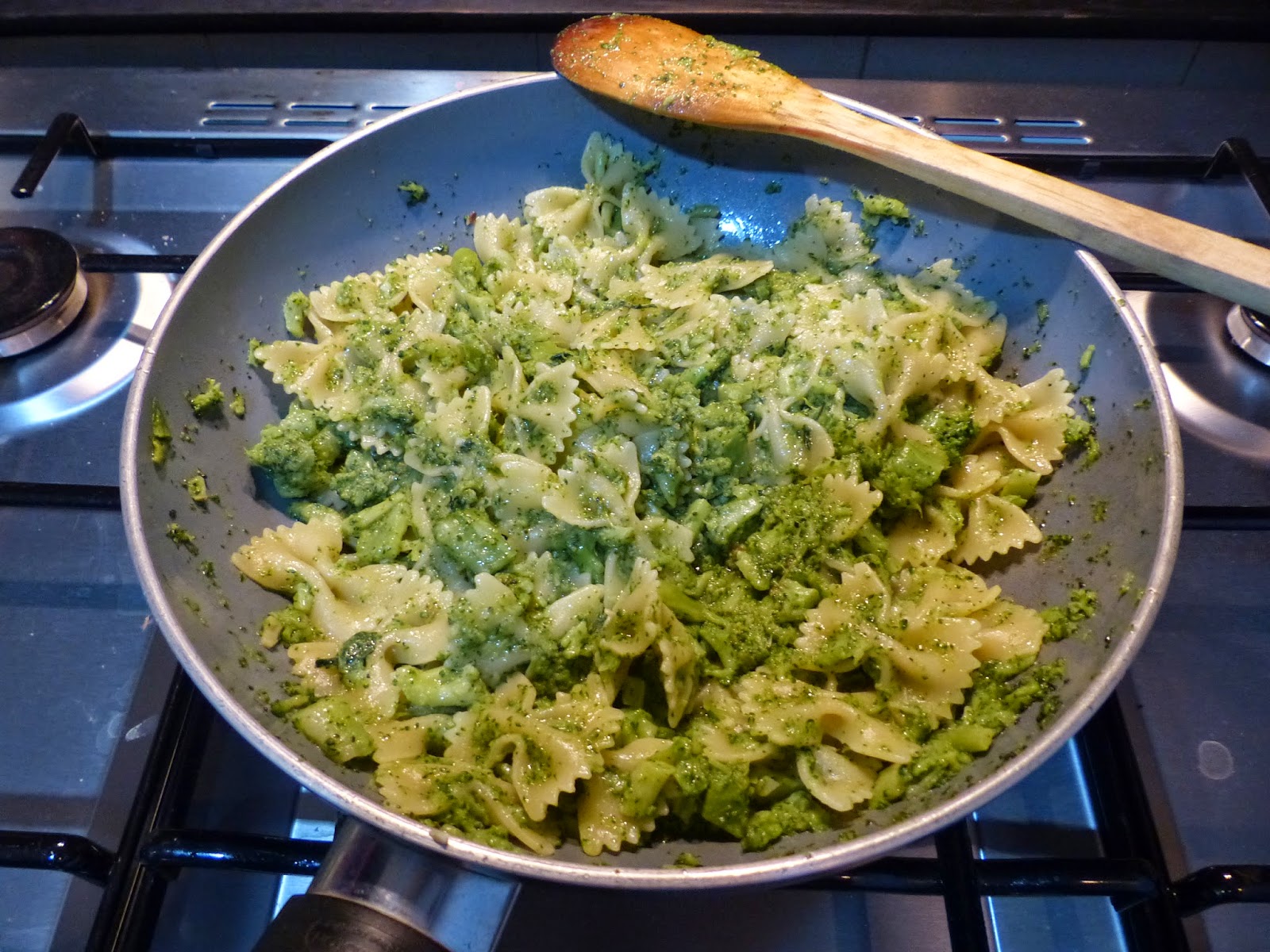 And another thing I'm loving about this trip is the bike: 125cc make a hell of a difference. 40,000 rupias are 10,000 more than what I normally pay, but thanks to the favorable exchange rate, it's still 3 bucks a day! 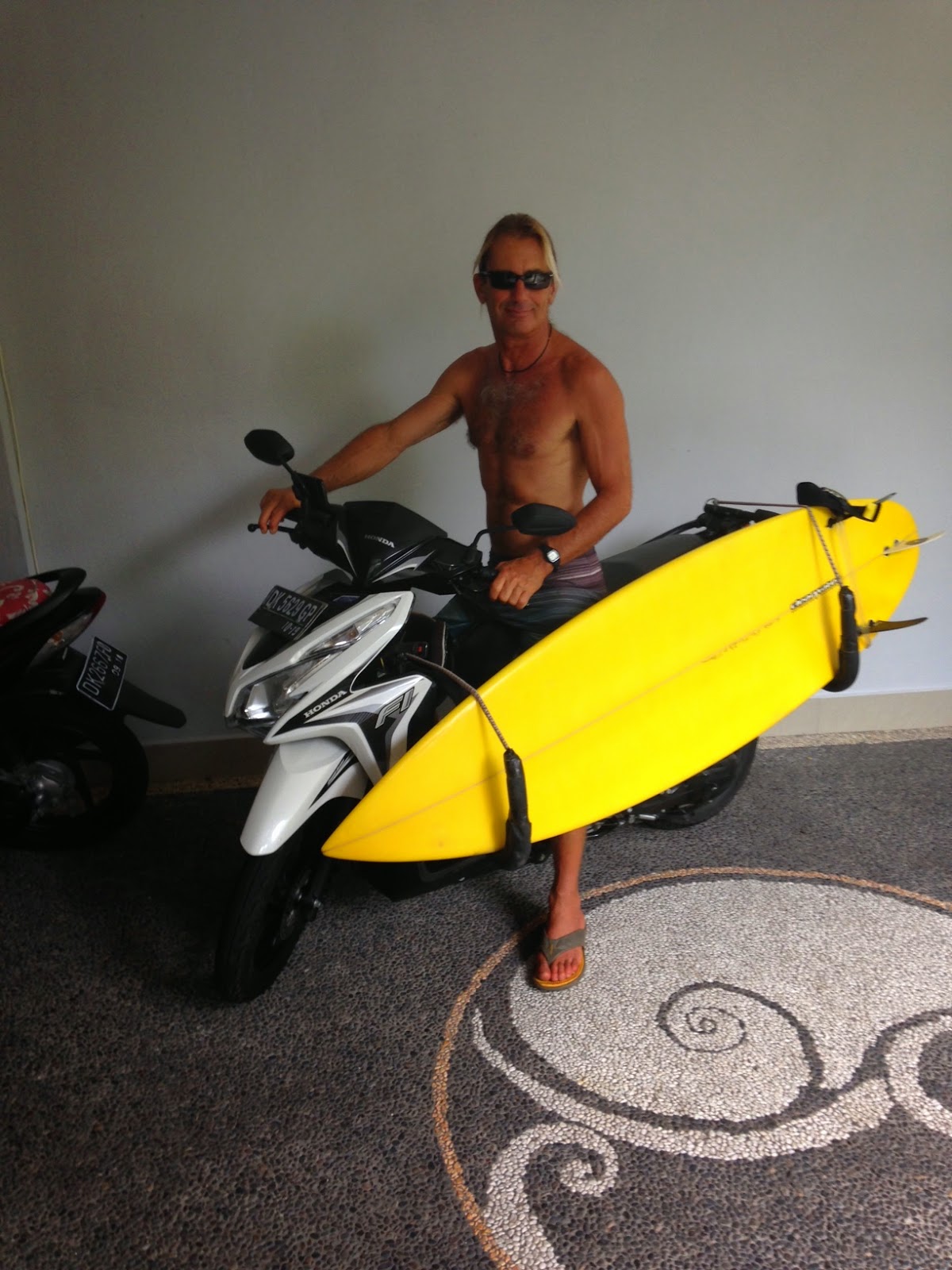 Next report should come up pretty soon now that there's waves. Hopefully (for who???) some gopro shots too. Cheers.
Posted by cammar at Friday, May 01, 2015

Enjoyed the story about the adventure surf. You broke all 4 the rules of not getting bit by a shark that they teach at the aquarium!! I laughed out loud when I saw the dead things on the beach. Glad you made it out of there!

Been to medewi few times, best on 2.5mt swell and up lines up beautifully, better if theres no wind, few more peaks around. stay away from there if it has been raining a lot days prior, last time balian and medewi where washed out, nasty water, current, all sorts of shit going on. caught a gnarly skin rash for days. on nice size swells like that i would always traveled, if got time check krui in south sumatra. genteng west java.