A longboard session for me yesterday. This is Junior at the harbor that was much smaller (and windier) than yesterday because the swell went from 16 to 46 degrees. Best direction for the harbor: straight north. 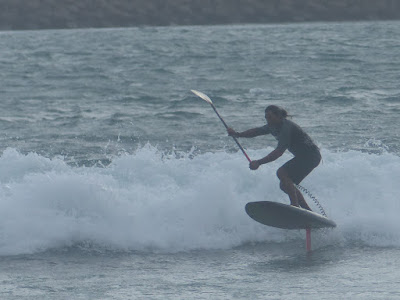 3ft @ 16s from 318° (NW)
1.7ft @ 12s from 330° (NW)
New WNW (direction at NW001 is 293) swell is up at all the buoys. Below is the graph of the reported buoys with an arrow to show the respective peak, together with the Surfline forecast (the free forecast was just reduced to the next two days... another good reason to get a subscription and see the next 14 days instead).
In Maui it should peak around noon and around 4ft 15s. That will make Hookipa surfable by common mortals like me, but there will still be plenty energy mixed up from the NE and some (hopefully light) wind. I will probably report from there before 7.30am. 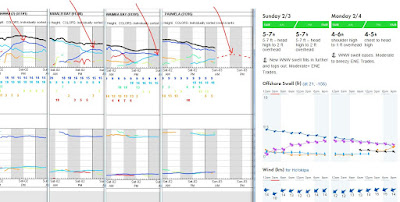 North Pacific has the usual WNW large fetch, the local windswell now more from a ENE direction and a brand new narrow NNE fetch we might want to keep an eye on in the next few days.

The fetch I spotted on Windy.com today is extremely remote. So remote that it doesn't even fit in the great circles map on the right, so I'm not really sure it is actually aimed at Hawaii (that sit where the red H is). It is also kinda narrow, but pretty strong. It'll be interesting to see if we get some really long period low energy in 8-10 days. 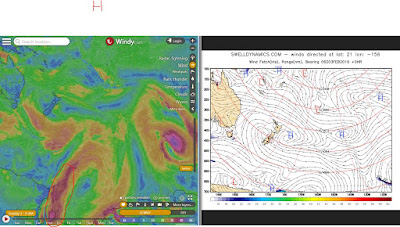 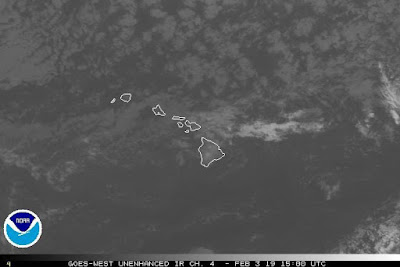